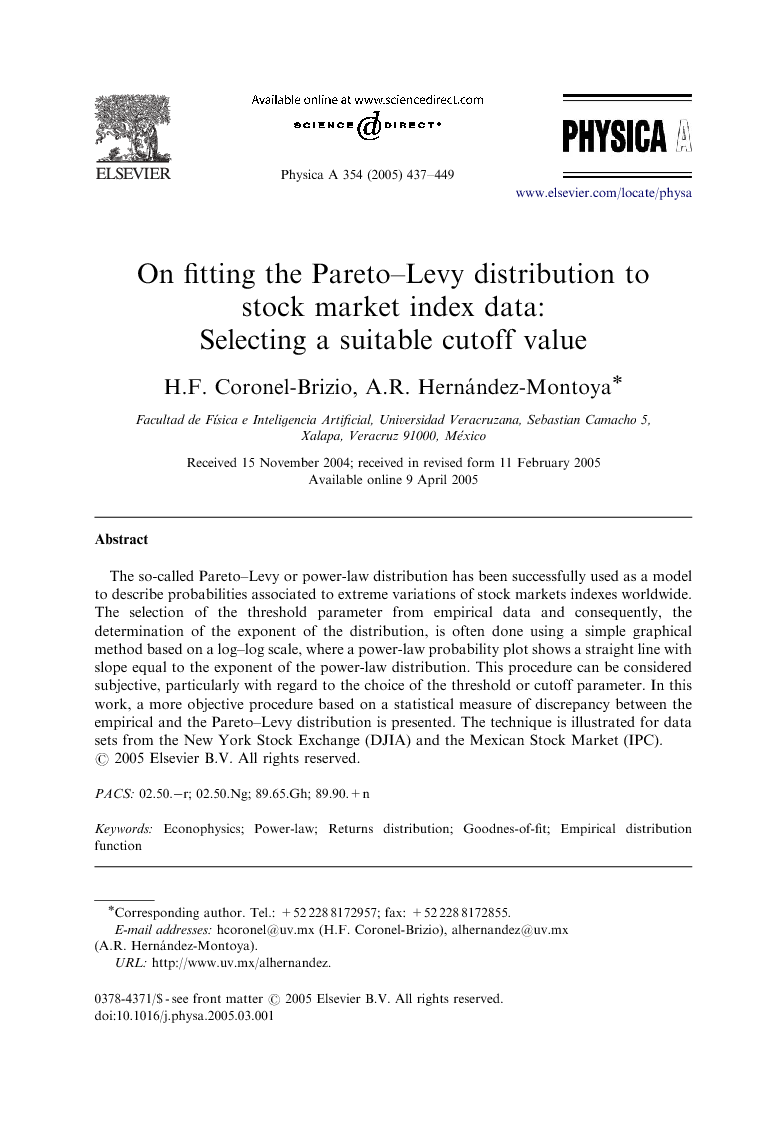 The so-called Pareto–Levy or power-law distribution has been successfully used as a model to describe probabilities associated to extreme variations of stock markets indexes worldwide. The selection of the threshold parameter from empirical data and consequently, the determination of the exponent of the distribution, is often done using a simple graphical method based on a log–log scale, where a power-law probability plot shows a straight line with slope equal to the exponent of the power-law distribution. This procedure can be considered subjective, particularly with regard to the choice of the threshold or cutoff parameter. In this work, a more objective procedure based on a statistical measure of discrepancy between the empirical and the Pareto–Levy distribution is presented. The technique is illustrated for data sets from the New York Stock Exchange (DJIA) and the Mexican Stock Market (IPC).

The power-law distribution is present in a great scope of physical (phase transitions, nonlinear dynamics and disordered systems) [1], [2] and [3], financial (stocks prices and indexes variations, volumes, volatility decay distributions) [4], [5], [6], [7], [8], [9], [10] and [11], and other kinds of social phenomena (the World Wide Web and Internet router links, sexual contact networks, size of cities, reference networks in scientific journals, university entrance examinations, and traffic penalties distributions) [12], [13], [14], [15], [16], [17] and [18]. All these systems share the property of complexity and are driven by collective mechanisms whose signature is the power-law distribution. In the analysis of stock market index variations, many observables are used [19]. In this work, we use the so-called returns series: if X(t)X(t) denotes the value of a particular index at time t, its returns series is defined as S(t)=logX(t+Δt)-logX(t)S(t)=logX(t+Δt)-logX(t); that is, the logarithmic changes in the values of the index during a certain interval of time ΔtΔt. The Pareto–Levy distribution is an useful model to describe probabilities associated to extreme variations in return series. In empirical studies, the fit of the distribution is usually performed by judging the degree of linearity in a log–log plot involving the empirical and theoretical distribution functions, in such a way that the estimation of the threshold or cutoff parameter of the distribution does not seem to follow an objective procedure. Given that recent well founded studies have criticized the reliability of this geometrical method [20] and [21], we propose a formal procedure based on measures of discrepancy between the empirical and theoretical distribution functions, to improve the quality of the fit. As it will be explained in Section 2, the proposed method is based on minimization of goodness-of-fit statistics. This approach has already been used in the literature (e.g. [22] and [23]) for fitting three parameter distributions and for fitting the generalized hyperbolic model to asset returns, respectively. In a very interesting paper by Ref. [24], a methodology for selecting the best fit among several possible distributions has also been presented with good results; however, their fits involve the complete sample and it does not appear to be very good for describing probabilities at the tails. It must be remarked that, even though these ideas are considered in our work, we intend to provide a simple method for estimating the cutoff parameter of the Pareto distribution based on a subset of the sample values for each tail of the distribution. In order to illustrate our technique, we studied the daily returns distribution function of both an emergent and a well developed stock market, the Mexican stock market index IPC1 and the American DJIA2, respectively.

An objective technique for fitting the power-law distribution to extreme variations in stock market indexes was presented. The method is based on the use of the Anderson-Darling Statistic A2A2 as a measure of discrepancy between the empirical and the theoretical distribution functions, selecting as the fitted parameters, the values which minimize such a measure. The technique was illustrated for the cases of the Dow Jones industrial average index and for the Mexican prices and quotations index. The results showed that this method can be used with better results than the traditional graphical method in which the value of the cutoff parameter γγ is chosen subjectively.