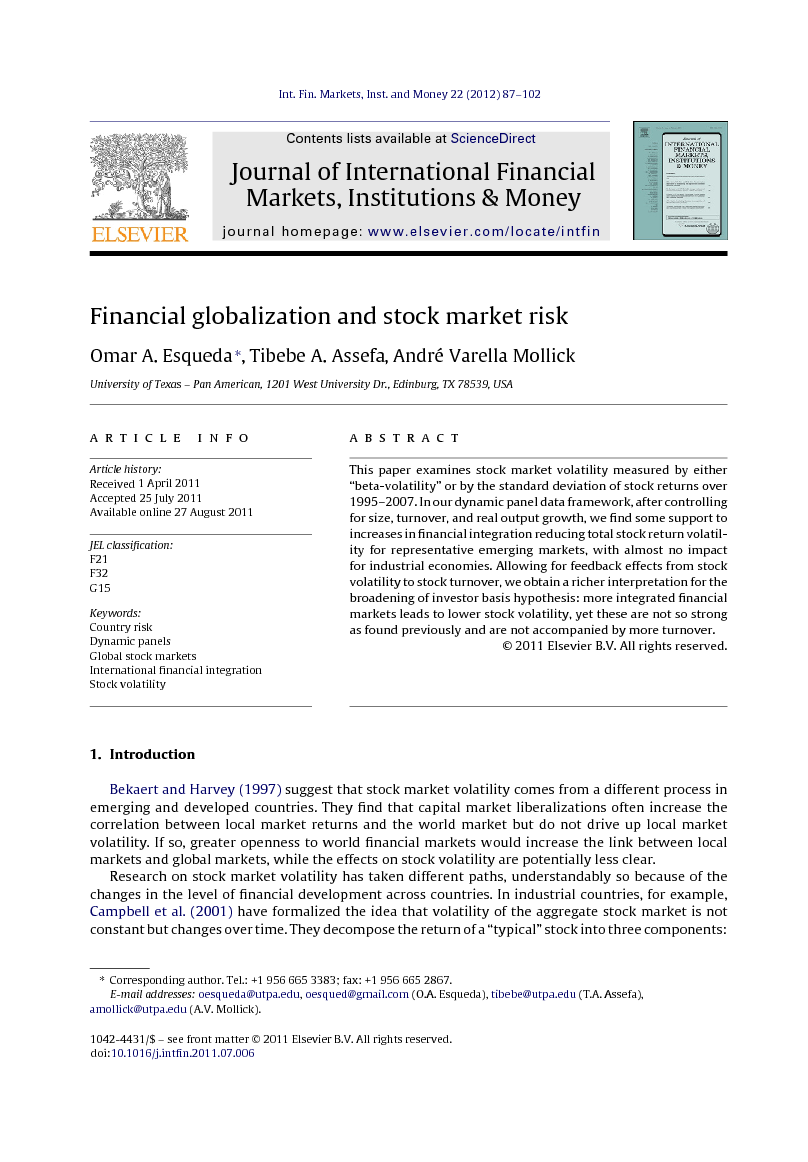 This paper examines stock market volatility measured by either “beta-volatility” or by the standard deviation of stock returns over 1995–2007. In our dynamic panel data framework, after controlling for size, turnover, and real output growth, we find some support to increases in financial integration reducing total stock return volatility for representative emerging markets, with almost no impact for industrial economies. Allowing for feedback effects from stock volatility to stock turnover, we obtain a richer interpretation for the broadening of investor basis hypothesis: more integrated financial markets leads to lower stock volatility, yet these are not so strong as found previously and are not accompanied by more turnover.

Examining the trends in financial openness over the 1995–2007 period, we observe more visible improvement in financial development (at least for IFI, GEQY, and trade measures) for developed countries than for emerging markets. However, controlling for several factors and allowing for simultaneity between stock market volatility and turnover, none of this change towards a more global financial system has any impact on stock market volatility in developed countries. In emerging markets, when “beta-volatility” is used there are some negative effects (varying from −0.265 to −0.406 under IFI), the latter of which is statistically significant at the 5% level. When standard deviation is used, negative effects are smaller and varying from −0.019 to −0.043 under GEQY and at about −0.006 under “de jure openness”. The results are less clear for subsample estimations when we split the sample between 1995–2001 and 2002–2007 but are in general supportive of a negative relationship between globalization measures and stock volatility. These figures are all significantly more modest than those reported by Umutlu et al. (2010). The findings in this paper suggest a richer interpretation for the broadening of investor basis hypothesis in emerging markets: more integrated financial markets lead to lower stock volatility, yet not because of more stock turnover. While any precise relationship between stock volatility and trading volume should be investigated with high-frequency data, Ané and Ureche-Rangau (2008) suggest that volatility and volume may share common short-term movements but that their long-run behavior is fundamentally different. Although the rise in financial integration was not found to be very pronounced in emerging markets, higher real GDP growth makes stock volatility go down, thus connecting the goods and services market with equities more visibly than in industrial countries. Theoretically, increases in real GDP growth make expected cash flows increase and thus stock returns to go up. The impact on stock volatility is, however, an open issue, and contrasts strongly across our subsamples. We aim to explore the research question posed in this paper with additional channels of financial globalization. It has long been argued, for example, that financial innovation, as seen in the increase in derivatives markets (such as options), may have also affected future cash flows. See Ross (1976) for impacts of options on price behavior and Skinner (1989) for evidence that stock options imply, on average, a statistically significant decline in volatility. The problem with this avenue of research is that data on options and derivative transactions are available mostly for developed countries. Our findings herein suggest, however, that stock volatility responds – in a weaker way than reported in previous research – to financial globalization, and not at all to trade related measures, such as volume of trade. We speculate that the growth of derivatives markets should have a negative impact on stock volatility since Hwang and Satchell (2000) and Drimbetas et al. (2007) have empirically documented a decrease in stock volatility following the introduction of derivative markets in the economies of U.K. and Greece, respectively. We leave the aforementioned conjecture as extension for further research.