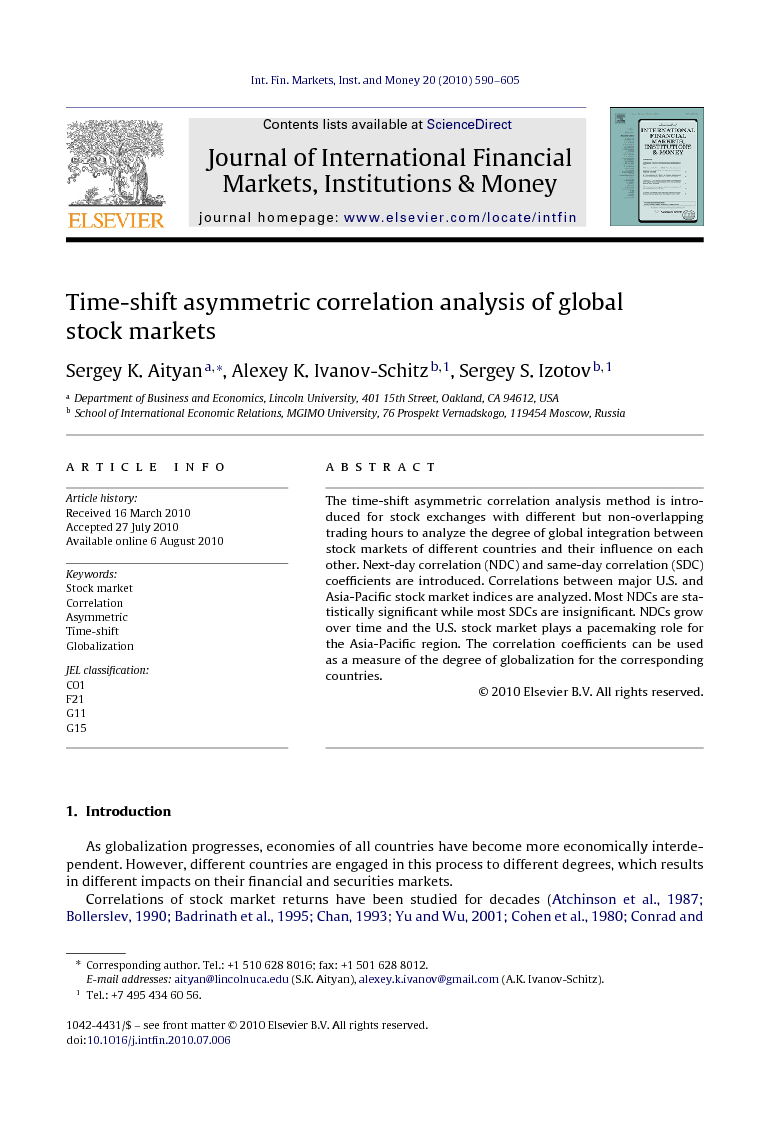 The time-shift asymmetric correlation analysis method is introduced for stock exchanges with different but non-overlapping trading hours to analyze the degree of global integration between stock markets of different countries and their influence on each other. Next-day correlation (NDC) and same-day correlation (SDC) coefficients are introduced. Correlations between major U.S. and Asia-Pacific stock market indices are analyzed. Most NDCs are statistically significant while most SDCs are insignificant. NDCs grow over time and the U.S. stock market plays a pacemaking role for the Asia-Pacific region. The correlation coefficients can be used as a measure of the degree of globalization for the corresponding countries.

The analysis of SDC and NDC coefficients between U.S. stock indices—including Dow Jones Industrial Average (DJI) and Nasdaq Composite (IXIC)—and Asia-Pacific stock indices—including N225, KS11, STI. HSI, TWII, SSEC, KLSE, and JKSE—shows that NDC are statistically significant for all Asia-Pacific indices considered with the exception of SSEC. In contrast, analysis shows that most SDC are typically statistically insignificant, with a few exceptions for KLSE and LKSE in the years of recession and economic instability. The values of SDC are lower than the values of the corresponding NDC. The values of NDC were between 0.4 and 0.6 in 2007 for all indices except SSEC. In the last 2 years the NDC for DJI-N225 rose above 0.6, but the NDC for other indices decreased to 0.3–04. Such a drop can be explained by the typical reduction of correlations during global financial instability. Both SDC and NDC for DJI-SSEC are statistically insignificant and below 0.4 in value. The fact that the NDC are statistically significant and are higher than the corresponding SDC—which are mostly insignificant—allows us to conclude that the U.S. stock market plays a pacesetting role at least on the scale of the U.S. and Asia-Pacific region, with the exception of the stock market of mainland China (SSEC). The introduction of SDC and NDC made such a conclusion possible, while the traditional correlation analysis does not identify cause-and-effect relationship. The analysis of NDC and SDC coefficients suggests that Asian stock markets are more likely following the U.S. market while the U.S. market behaves more independently of the Asian stock markets. As it becomes evident from the results of this paper, the time-shift asymmetric correlation method with SDC and NDC helps better identify pairs of data for corellation analysis of the markets with different non-overlapping trading hours. Traditionally, researchers used only SDC matching pairs for close-to-close correlation analysis that, as was shown in this paper, leads to statistically insignificant results and underestimated correlation coefficients (Hamao et al., 1990, Koutmos and Booth, 1995, Martens and Poon, 2001 and Michayluk et al., 2006; and others), while NDC coefficients show stronger correlations with very high statistical significance. As we have suggested in this paper, correlation coefficients between stock market indices can be used as a measure of global integration for the corresponding countries. Low correlations between Chinese Shanghai Composite (SSEC) and U.S. Dow Jones (DJI) and Nasdaq Composite (IXIC) indicate that China, though it plays one of the leading roles in the global economy, has an even bigger internal market that offsets its complete integration in the global economy and its dependence on the global financial and economic instabilities.