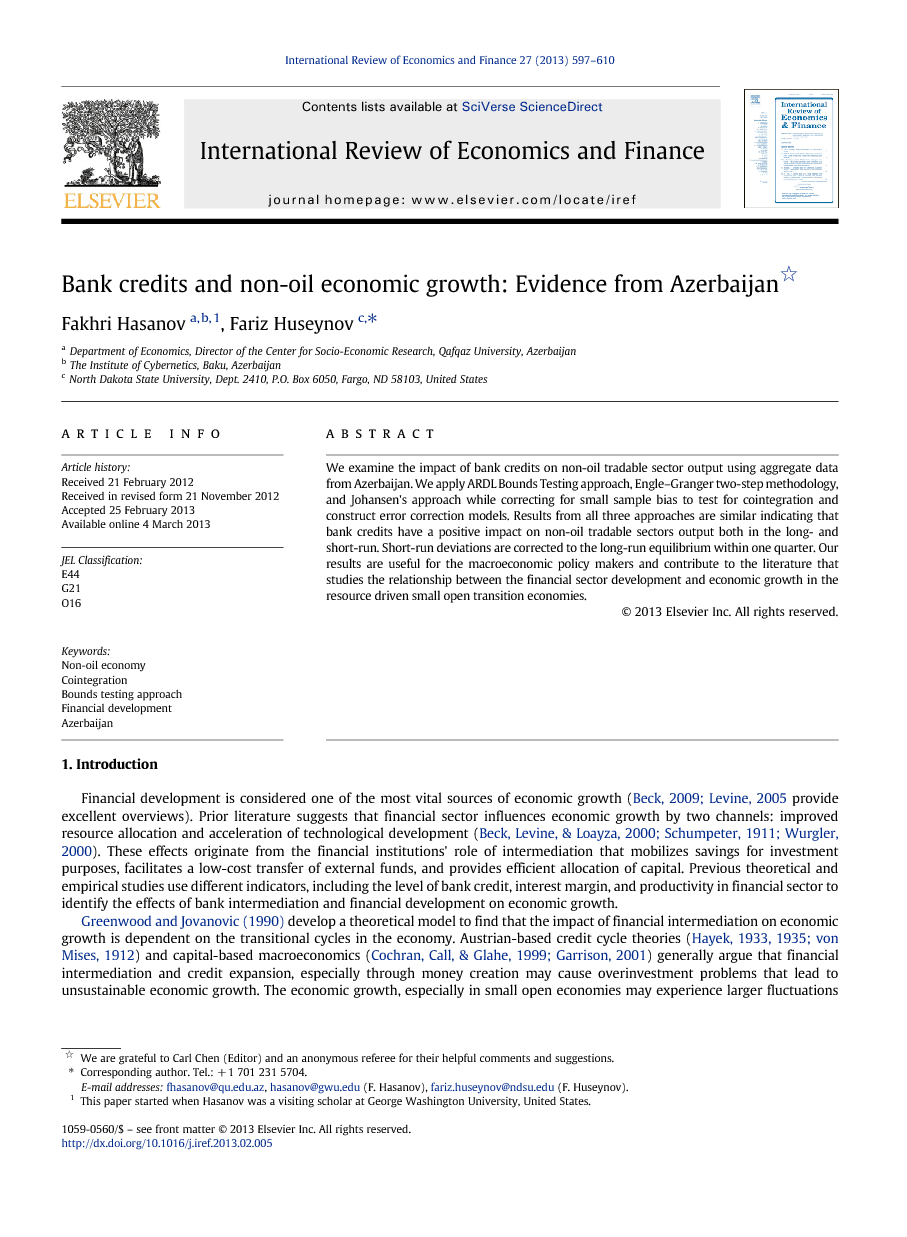 We examine the impact of bank credits on non-oil tradable sector output using aggregate data from Azerbaijan. We apply ARDL Bounds Testing approach, Engle–Granger two-step methodology, and Johansen's approach while correcting for small sample bias to test for cointegration and construct error correction models. Results from all three approaches are similar indicating that bank credits have a positive impact on non-oil tradable sectors output both in the long- and short-run. Short-run deviations are corrected to the long-run equilibrium within one quarter. Our results are useful for the macroeconomic policy makers and contribute to the literature that studies the relationship between the financial sector development and economic growth in the resource driven small open transition economies.

Prior literature suggests that financial sector stimulates the economic growth through efficient allocation of funds. However, the direction of causality varies across countries, regions and even variables employed in these studies. In developing countries financial reforms, competition in banking industry and increase in bank credits lead to economic growth. Investigation of the relationship between financial sector and economic output is even more intriguing, such that in these countries non-oil tradable sectors become less attractive following the windfall of resource-driven revenues. We use the aggregate data from Azerbaijan, a transition country with natural resource driven economy and apply autoregressive distributed lag (ARDL) Bound Testing, Engle–Granger (EG) and Johansen's approach to test for cointegration between bank credits and non-oil economic growth. Recent studies prefer ARDL approach due to its specific advantages over other techniques. We also address the small sample bias in all three tests methods. Our results suggest that there is a positive cointegrating relationship between financial development and non-oil economic growth. We also find evidence that appreciation in real effective exchange rate negatively affects non-oil economic growth. Our findings contribute to the literature that studies the determinants of economic growth in resource-rich transition economies, as well as to the literature examining the link between the financial sector development and economic growth. Our results also contribute to the recent debates over what determinants macroeconomic policy makers should focus on to stimulate the economic growth.