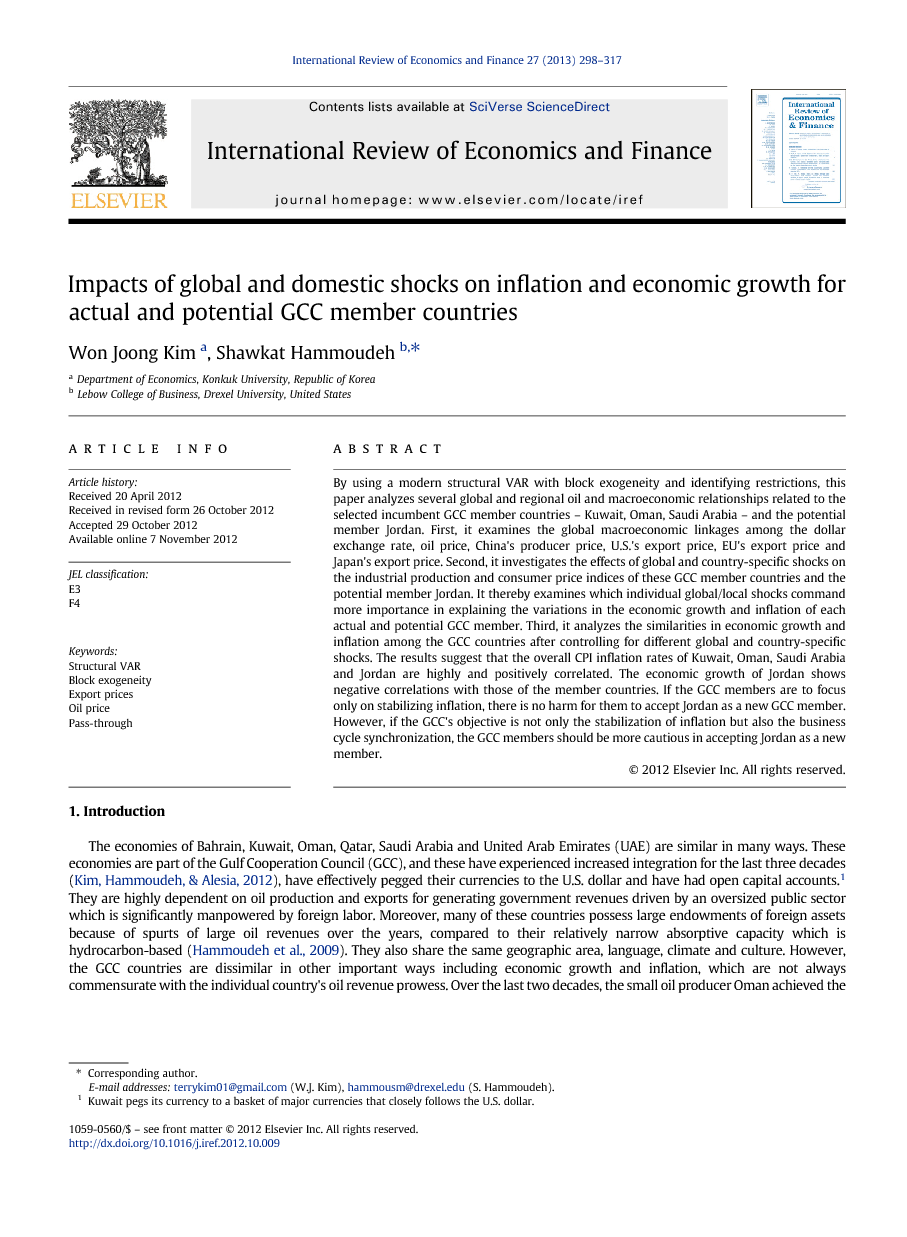 By using a modern structural VAR with block exogeneity and identifying restrictions, this paper analyzes several global and regional oil and macroeconomic relationships related to the selected incumbent GCC member countries – Kuwait, Oman, Saudi Arabia – and the potential member Jordan. First, it examines the global macroeconomic linkages among the dollar exchange rate, oil price, China's producer price, U.S.'s export price, EU's export price and Japan's export price. Second, it investigates the effects of global and country-specific shocks on the industrial production and consumer price indices of these GCC member countries and the potential member Jordan. It thereby examines which individual global/local shocks command more importance in explaining the variations in the economic growth and inflation of each actual and potential GCC member. Third, it analyzes the similarities in economic growth and inflation among the GCC countries after controlling for different global and country-specific shocks. The results suggest that the overall CPI inflation rates of Kuwait, Oman, Saudi Arabia and Jordan are highly and positively correlated. The economic growth of Jordan shows negative correlations with those of the member countries. If the GCC members are to focus only on stabilizing inflation, there is no harm for them to accept Jordan as a new GCC member. However, if the GCC's objective is not only the stabilization of inflation but also the business cycle synchronization, the GCC members should be more cautious in accepting Jordan as a new member.

The economies of Bahrain, Kuwait, Oman, Qatar, Saudi Arabia and United Arab Emirates (UAE) are similar in many ways. These economies are part of the Gulf Cooperation Council (GCC), and these have experienced increased integration for the last three decades (Kim, Hammoudeh, & Alesia, 2012), have effectively pegged their currencies to the U.S. dollar and have had open capital accounts.1 They are highly dependent on oil production and exports for generating government revenues driven by an oversized public sector which is significantly manpowered by foreign labor. Moreover, many of these countries possess large endowments of foreign assets because of spurts of large oil revenues over the years, compared to their relatively narrow absorptive capacity which is hydrocarbon-based (Hammoudeh et al., 2009). They also share the same geographic area, language, climate and culture. However, the GCC countries are dissimilar in other important ways including economic growth and inflation, which are not always commensurate with the individual country's oil revenue prowess. Over the last two decades, the small oil producer Oman achieved the highest economic growth associated with moderate inflation, while the world's largest oil exporter Saudi Arabia recorded the lowest economic growth over the sample period. The GCC country that has experienced the highest increase in the cost of living is UAE. This disproportionate economic performance among the GCCs should have implications for their social and economic policies including policies that deal with cost and standard of living, fiscal responses to challenges, rigidity of the indigenous labor market, mismatch between education and the needs of the labor market, and the creation of the monetary (and hopefully fiscal) union. Historically, economic growth and inflation differentials between the GCC countries had diverged and persisted for some time and then tightened over other times to diverge again over the last two decades.2 This differential in economic and inflation performances should not be very surprising despite the similarity between the GCC countries. These countries pursue different fiscal policies, their indigenous labor markets have different rigidities, their housing markets vary from surpluses to shortages, and their needs for food imports relative to domestic production vary. All these factors contribute to the GCC country differentials in economic growth and inflation. They also have an implication for any future expansion of the GCC membership. The major focus of this paper is on the impacts of global shocks on the GCC countries' economic growth as embodied by changes in domestic industrial production, and inflation as represented by changes in the domestic consumer price index, and on the expansion of the GCC state membership. The global shocks include exchange rate shocks, oil price shocks, and shocks in export prices of the United States, eurozone, Japan and China. Shocks in China's export price are represented by the producer price index for lack of adequate data on the Chinese export price index. Domestic GCC country shocks include shocks to domestic industrial production and consumer price index, capturing shocks to domestic economic growth and inflation. The GCC countries that are included in this study are determined by the availability of consistent data series on domestic industrial production and CPI. These are Kuwait, Oman and Saudi Arabia which are in fact good representatives of all the GCC members. Moreover, since the GCC countries have expressed interest in expanding its membership and pinpointed certain countries to be potential members who in turn also desire to join, we include Jordan as a potential GCC member country. Jordan does not produce oil, but shares geography, language and culture, and has economic and labor ties with the incumbent GCC member countries. To this end, we employ a structural VAR with block exogeneity and identifying restrictions to achieve the objectives of the paper. This model includes macroeconomic linkages among the exchange rate, oil price, the producer price of China, the U.S. export price, the EU export price and Japan export price. It also addresses relationships between industrial production and the consumer price indices of the selected incumbent and potential GCC member countries. The results show that if the GCC members are to focus only on stabilizing inflation, there is no harm for them to accept Jordan as a new GCC member. On the other hand, since the GCC's objective is not focusing only on the stabilization of inflation but also on the synchronization of the business cycle, the GCC countries should be more cautious in accepting Jordan as a new member. Given the fact that Jordan is not an oil-producing country, it would be a difficult task to achieve successful business cycle synchronization between the GCC member countries and Jordan, particularly if they want to form a lasting monetary union with a common central bank. The paper is organized as follows. After this introduction, Section 2 presents a review of the literature on the GCC integration, economic growth and inflation. Section 3 provides the model and its identification. Section 4 discusses the empirical results and Section 5 concludes.

This paper uses a structural VAR model with block exogeneity and identifying restrictions to examine two major issues related to economic growth and inflation in the incumbent GCC member countries and the aspirant country Jordan. Based on the availability of data, the selected incumbent GCC members are Kuwait, Oman and Saudi Arabia which are oil producers of varying prowess that is immense for the third member. The aspirant country Jordan, which is not an oil producer, has expressed a strong desire since 1995 to join the GCC as a full member. The first issue is related to global macroeconomic linkages among the dollar exchange rate, the oil price, China's producer price, U.S.'s export price, EU's export price and Japan's export price. Thus, it relates to the effects of global shocks on the economic growth and inflation of the GCC countries and Jordan. The impulse response analyses show that all the global shocks considered in this paper have generally positive effects on the inflation of the GCC countries. This finding suggests that the GCC inflation is caused by the oil boom, depreciating U.S. dollar relative to other countries' currencies, imports inflation from major countries or blocks and domestic sources. The implication of this result has a bearing on the need for having an effective monetary policy, selecting the degree of link between these countries' currencies and the U.S. dollar, labor market flexibility and the magnitude of subsidies for the basic ingredients of life. Specifically, the variance decomposition results show that the U.S. exchange rate depreciation shocks followed by the oil shocks are the major sources of inflation in the GCC countries. Oil price aside, this important result underscores the GCC countries' vulnerability to anchoring their currencies to the U.S. dollar, particularly during dollar depreciation. This is consistent with the findings of Honohan and Lane (2003) who contend that the nominal effective exchange rate and business cycle fluctuations are the key drivers behind the differentials in Europe. China's producer price shock, which is a supply shock, approximates the oil price shock in inflation impact, highlighting the importance of the “China factor” on the GCC inflation. Finally, the demand shocks of the U.S. and EU export prices also have some but varying impacts on the GCC inflation. However, the Japanese export shock has a very limited effect on the GCC inflation probably because of its extended deflation and lost decade. The policy implication of this result points to the need of synchronizing the baskets of currencies that back their exchange rates with the diversity of their trading partners. As far as the aspirant Jordan is concerned, the oil price shock has a more sizable upward effect on its inflation than on the inflation of the oil-producing GCC countries. On the other hand, the responsiveness of Jordan's inflation to the non-oil global shocks is similar to that of the GCC countries. Jordan should also have a more effective monetary policy, more flexible exchange rate and more government subsidies of basic products to avoid political unrest, and be in harmony with the GCC countries. In terms of industrial production and economic growth, the oil-rich GCC countries show different responses to global shocks than Jordan. The results show that Jordan's economic growth is mainly affected by its domestic growth shock (about 90% of the total variation in the economic growth) and marginally by the oil price shock (about 7%) in the long run. Economic growth of the oil-rich GCC countries is not only affected by their own domestic shocks (up to 60% for Oman, for example), but is also greatly affected by the U.S. exchange rate depreciation shock (up to 32% for Kuwait), oil price shock (up to 35% for Saudi Arabia), Chinese producer price shock (up to 19% for Kuwait) and EU export price shock (up to 4% for Oman) in the long run. The U.S. export price shocks only have minor effects on the economic growth of the GCC countries probably because the GCC currencies and oil revenues are effectively tied to the U.S. dollar. Thus, this second major result highlights the importance of the dollar depreciation and China's producer price shocks, as well as the oil shock, on the GCC economic growth which is not the case for Jordan. The second issue in this paper concerns the similarities in economic growth and inflation among the selected incumbent GCC member countries and the aspiring Jordan. An important question here relates to whether there is a significant synchronization between the incumbent GCC members and the aspirant Jordan that would make a case for Jordan to join merely on economic grounds. The results demonstrate that if the GCC members are focused only on stabilizing inflation, then there is no harm for them to accept Jordan as a new GCC member. However, if the GCC's objective is not only focused on the stabilization of inflation but also on the business cycle synchronization which is more important, then the GCC should take more cautious steps in accepting Jordan as a new member. Given that Jordan is not an oil-producing country, it would be difficult to achieve business synchronization between the GCC member countries and Jordan. Given, however, that Jordan's geography, language and culture conformity with the other GCC countries, closer ties can be formed through enhanced labor mobility and workers' remittances.