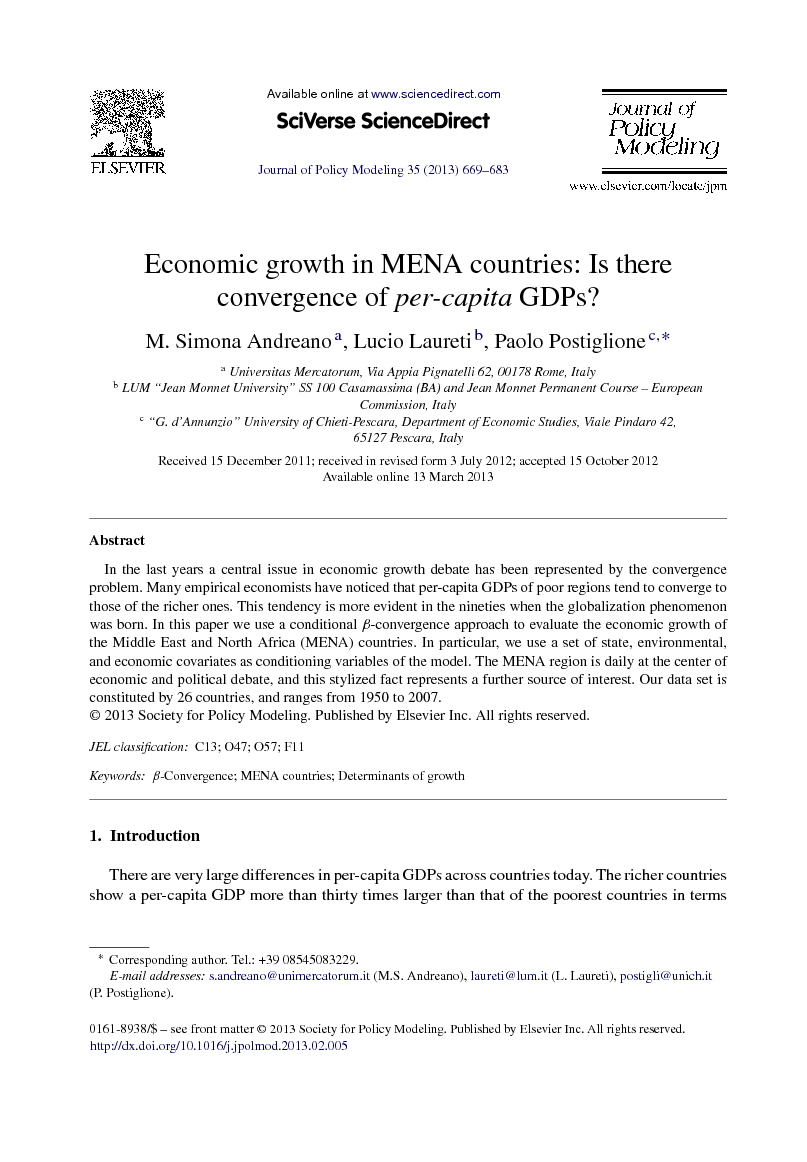 In the last years a central issue in economic growth debate has been represented by the convergence problem. Many empirical economists have noticed that per-capita GDPs of poor regions tend to converge to those of the richer ones. This tendency is more evident in the nineties when the globalization phenomenon was born. In this paper we use a conditional β-convergence approach to evaluate the economic growth of the Middle East and North Africa (MENA) countries. In particular, we use a set of state, environmental, and economic covariates as conditioning variables of the model. The MENA region is daily at the center of economic and political debate, and this stylized fact represents a further source of interest. Our data set is constituted by 26 countries, and ranges from 1950 to 2007.

Globalization is changing the political and economic world with different effects in different regions. The gap between rich and poor countries has widely changed over the past two decades, and long-term convergence can be generally verified in empirical analyses. This paper attempts to empirically answer the question of whether there is convergence in per capita output across MENA countries. The empirical analysis of the natural logarithm of per-capita GDPs for 26 MENA countries over the last 60 years strongly confirms the hypothesis of conditional convergence. The analysis enabled us to identify the main variables on which a careful and prudent policy intervention at regional level should be based. In fact, the long-term growth in this highly heterogeneous area is the result of a set of socio-economic, technological, and governance factors. In our empirical analysis, the degree of international openness and the government intervention and expenditure are important economic control variables. The improvement of governance factors, such as actions to reduce corruption, the greater reliability and efficiency of government, political stability and violence reduction, play a role in stimulating the long-run behavior and moving up the development path of the steady-state. Technological development and human capital are both highly relevant for the growth. One important extension of our work concerns the analysis of the impact of the space dimension on the convergence process, here verified only with ex-ante identified dummies for the five geographic areas. In this respect, a more in-depth analysis is needed in order to confirm these results. Given the prominent role of technological progress in the conditional convergence analysis, different proxy might be used in the empirical analysis, in order to better evaluate its conditioning impact on the growth.