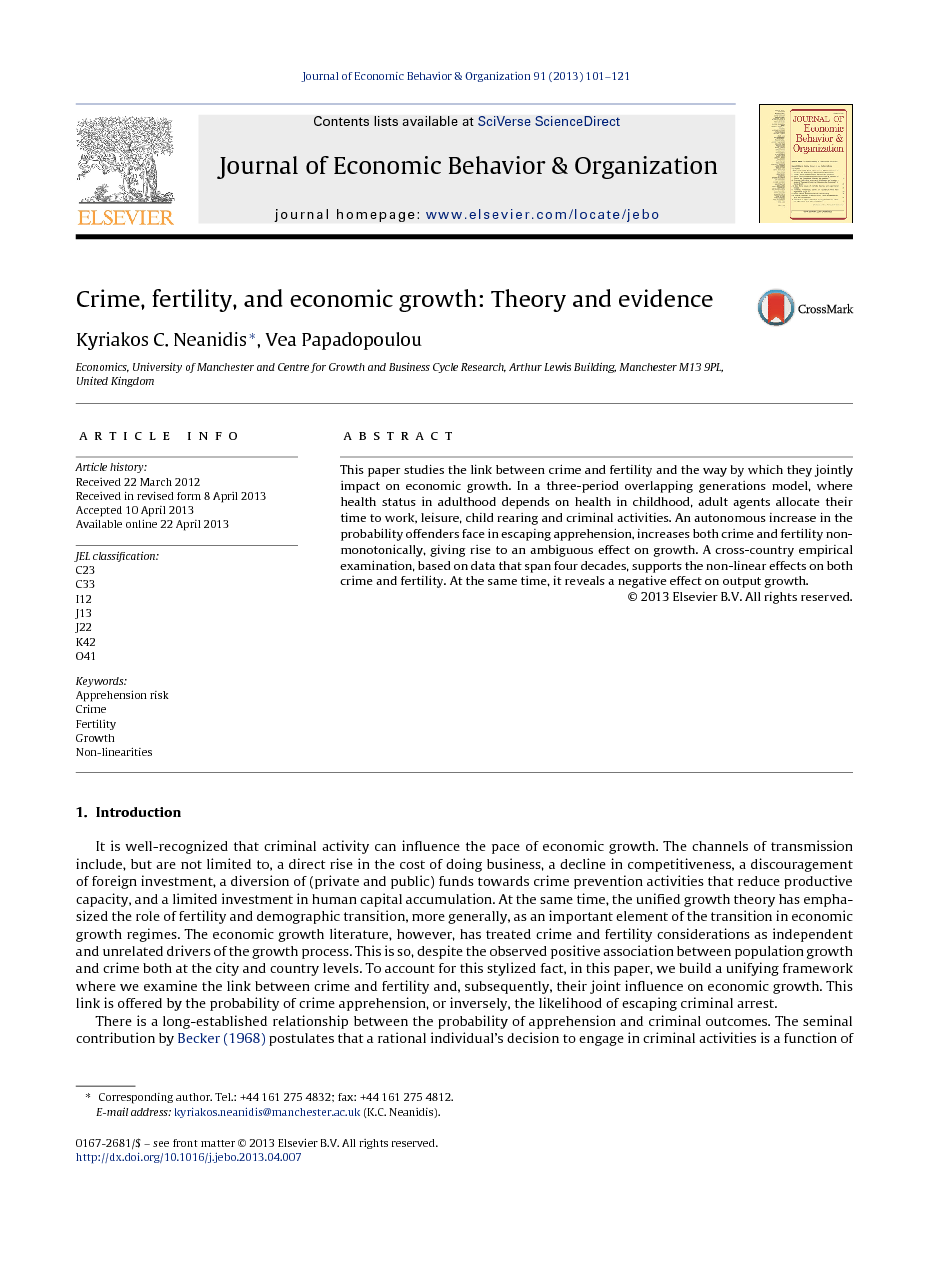 This paper studies the link between crime and fertility and the way by which they jointly impact on economic growth. In a three-period overlapping generations model, where health status in adulthood depends on health in childhood, adult agents allocate their time to work, leisure, child rearing and criminal activities. An autonomous increase in the probability offenders face in escaping apprehension, increases both crime and fertility non-monotonically, giving rise to an ambiguous effect on growth. A cross-country empirical examination, based on data that span four decades, supports the non-linear effects on both crime and fertility. At the same time, it reveals a negative effect on output growth.

The aim of this paper has been to establish a link between crime and fertility and examine the way via which these two variables jointly influence economic growth. The factor that links crime and fertility decisions is the probability of escaping criminal apprehension, or inversely, the likelihood of criminal arrest. We focus on this variable given its importance as a determinant of crime-related activities, stressed both in the theoretical and the empirical literature. The paper develops a theoretical model that brings together the above elements of interest. It then proceeds to test empirically the theoretical predictions. The theoretical model is based on an OLG economy where reproductive agents live for three periods: childhood, adulthood and old-age. Adult agents allocate their time into four activities: work, leisure, child-rearing, and crime. Even though work time is exogenously determined, individuals optimally choose their time allocation in the remaining activities. This involves taking into account the returns of crime and the health status of children. These two jointly influence decisions as to the levels of crime and fertility, which in turn guide the behaviour of economic growth given the linear dependence of adult health status (labour productivity) and children health status. Our theoretical contribution is three-fold. First, we show that the effect of crime-escaping likelihood on criminal activity (in the form of theft) is non-monotonic. Specifically, only after a critical probability threshold, the likelihood of escaping apprehension has a positive effect on crime. This finding improves upon the current literature which reports a linear positive effect. Second, fertility rises for relatively high values of the probability of escaping arrest, thus giving rise to a positive relationship between crime and fertility. Worthy of note is that this relationship is not causal as suggested in the literature, but arises endogenously through the impact of the arrest probability. Third, the impact of the apprehension probability on economic growth is not straightforward due to the non-linearities and the multitude of channels of influence. Thus, in theory it is plausible that higher crime and fertility rates, due to higher likelihood of avoiding apprehension, have a positive growth effect. The implications of the theoretical model are tested against data from 90 countries over the period 1970–2008. This involves tracing the impact of escaping the arrest likelihood on the three key variables of the model: crime, fertility, and growth. The empirical methodology considers both reduced form estimations and simultaneous estimations of the system of the three equations. Our results broadly support the theoretical predictions as they suggest a non-linear effect of the probability of escaping apprehension on both crime and fertility rates. The estimated critical value of this probability is found to lie in the neighborhood of 10–30 percent. In addition, the impact on growth is consistently found to be negative, making clear that higher rates of crime and fertility distort economic growth. These findings are robust to various sensitivity tests and efforts to control for endogeneity bias.