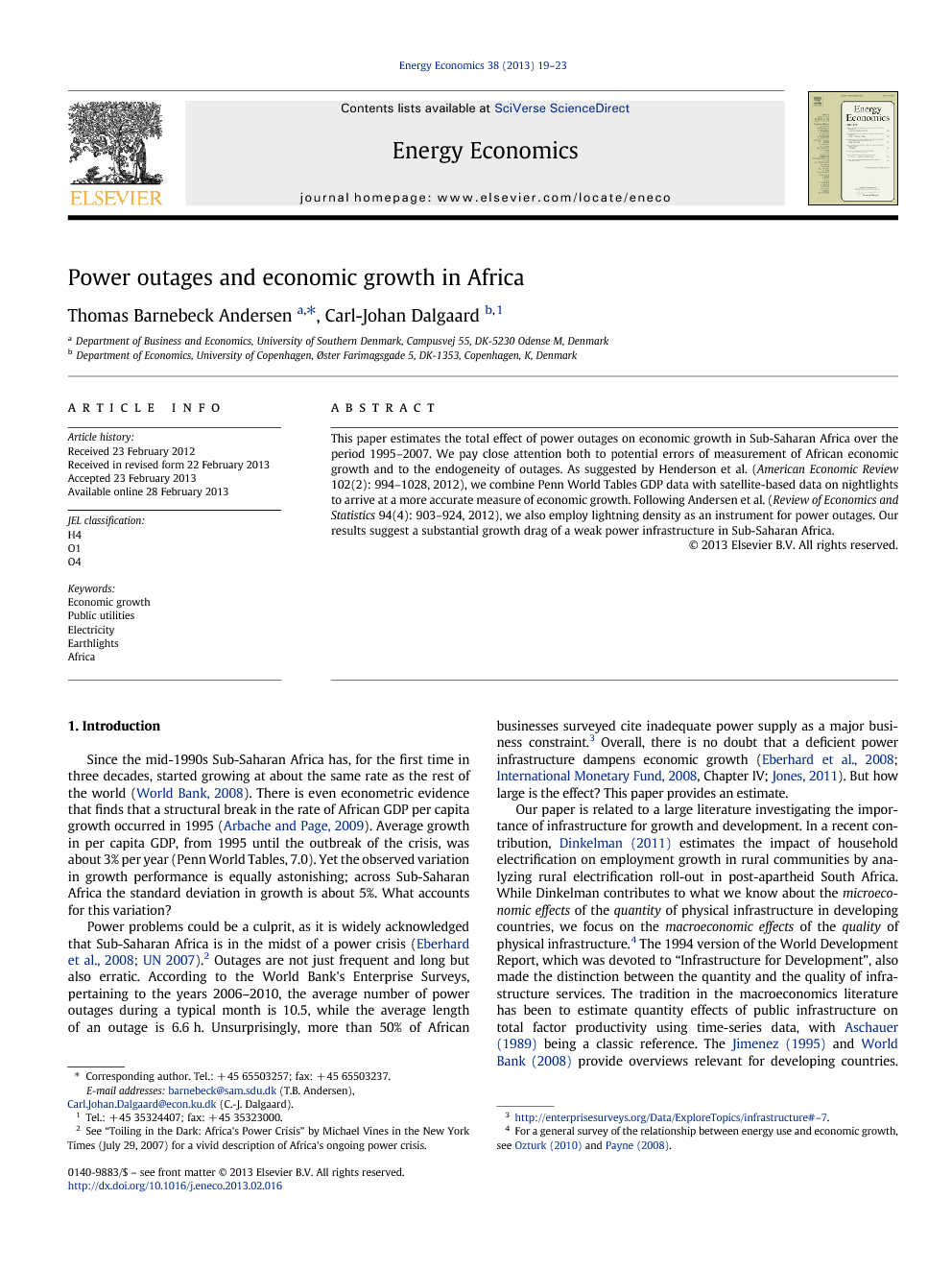 This paper estimates the total effect of power outages on economic growth in Sub-Saharan Africa over the period 1995–2007. We pay close attention both to potential errors of measurement of African economic growth and to the endogeneity of outages. As suggested by Henderson et al. (American Economic Review 102(2): 994–1028, 2012), we combine Penn World Tables GDP data with satellite-based data on nightlights to arrive at a more accurate measure of economic growth. Following Andersen et al. (Review of Economics and Statistics 94(4): 903–924, 2012), we also employ lightning density as an instrument for power outages. Our results suggest a substantial growth drag of a weak power infrastructure in Sub-Saharan Africa.

Since the mid-1990s Sub-Saharan Africa has, for the first time in three decades, started growing at about the same rate as the rest of the world (World Bank, 2008). There is even econometric evidence that finds that a structural break in the rate of African GDP per capita growth occurred in 1995 (Arbache and Page, 2009). Average growth in per capita GDP, from 1995 until the outbreak of the crisis, was about 3% per year (Penn World Tables, 7.0). Yet the observed variation in growth performance is equally astonishing; across Sub-Saharan Africa the standard deviation in growth is about 5%. What accounts for this variation? Power problems could be a culprit, as it is widely acknowledged that Sub-Saharan Africa is in the midst of a power crisis (Eberhard et al., 2008 and United Nations Economic Commission for Africa, 2007).2 Outages are not just frequent and long but also erratic. According to the World Bank's Enterprise Surveys, pertaining to the years 2006–2010, the average number of power outages during a typical month is 10.5, while the average length of an outage is 6.6 h. Unsurprisingly, more than 50% of African businesses surveyed cite inadequate power supply as a major business constraint.3 Overall, there is no doubt that a deficient power infrastructure dampens economic growth (Eberhard et al., 2008; International Monetary Fund, 2008, Chapter IV; Jones, 2011). But how large is the effect? This paper provides an estimate. Our paper is related to a large literature investigating the importance of infrastructure for growth and development. In a recent contribution, Dinkelman (2011) estimates the impact of household electrification on employment growth in rural communities by analyzing rural electrification roll-out in post-apartheid South Africa. While Dinkelman contributes to what we know about the microeconomic effects of the quantity of physical infrastructure in developing countries, we focus on the macroeconomic effects of the quality of physical infrastructure. 4 The 1994 version of the World Development Report, which was devoted to “Infrastructure for Development”, also made the distinction between the quantity and the quality of infrastructure services. The tradition in the macroeconomics literature has been to estimate quantity effects of public infrastructure on total factor productivity using time-series data, with Aschauer (1989) being a classic reference. The Jimenez (1995) and World Bank (2008) provide overviews relevant for developing countries. This paper departs from the macroeconomic tradition in three ways. First we focus exclusively on the quality of infrastructure. Secondly, we estimate the total effect of infrastructure as opposed to a partial effect. Thirdly, using IV estimation and adjusted data, we pay more attention to the intricacies of obtaining identification. The remainder of this paper is organized as follows. The next section discusses the empirical specification, identification and data. Section 3 presents and discusses the main results, while Section 4 concludes.

In this paper we ask by how much power outages have affected Africa's recent growth experience. We believe our estimates show that the economic impact is likely to have been substantial. One way to appreciate the economic significance of the results is to view them through the lens of a neoclassical growth model (e.g., Solow, 1956). In the context of the Solow model, where the long-run growth rate is exogenously given, changes in OUTRAGES will have long-run levels effects. How big is the implied impact? As seen from column 6 of Table 1, conditional convergence prevails (initial GDP per capita is significant at the 10% level). The long-run level effect implied by our estimates can then be assessed by setting g = 0 (or given at some exogenous non-zero level; a steady state assumption) and then proceed to isolate log(GDP per capita) in the regression equation. We obtain log(GDPper capita) = − (0.02/0.007) ∗ log(OUTAGES) = − 2.86 ∗ log(OUTAGES). Hence, a one percent increase in outages reduces long-run GDP per capita by 2.86%. Note that while conditional convergence apparently is present, the rate of convergence is only 0.7% per year, which is considerably below the “iron law of convergence” involving a rate of convergence of 2% per year (Barro, 2012). Taken at face value, the estimate for the rate of convergence implies it takes about 100 years (= 72/0.7) to close half the gap to the steady state after a shock to the economy. The “long-run” is very far away. Accordingly, as an alternative way to gauge the economic significance of our findings, suppose we ignore convergence. Judged from the point estimate for OUTAGES, our results then suggest that if all African countries had experienced South Africa's power quality, the continent's average annual rate of real GDP per capita growth would have been increased by 2 percentage points and, measured by the coefficient of variation, the cross-country variation in growth rates would have been reduced by around 20%. These numbers, we believe, underscore the importance of solving the power crisis in Africa.