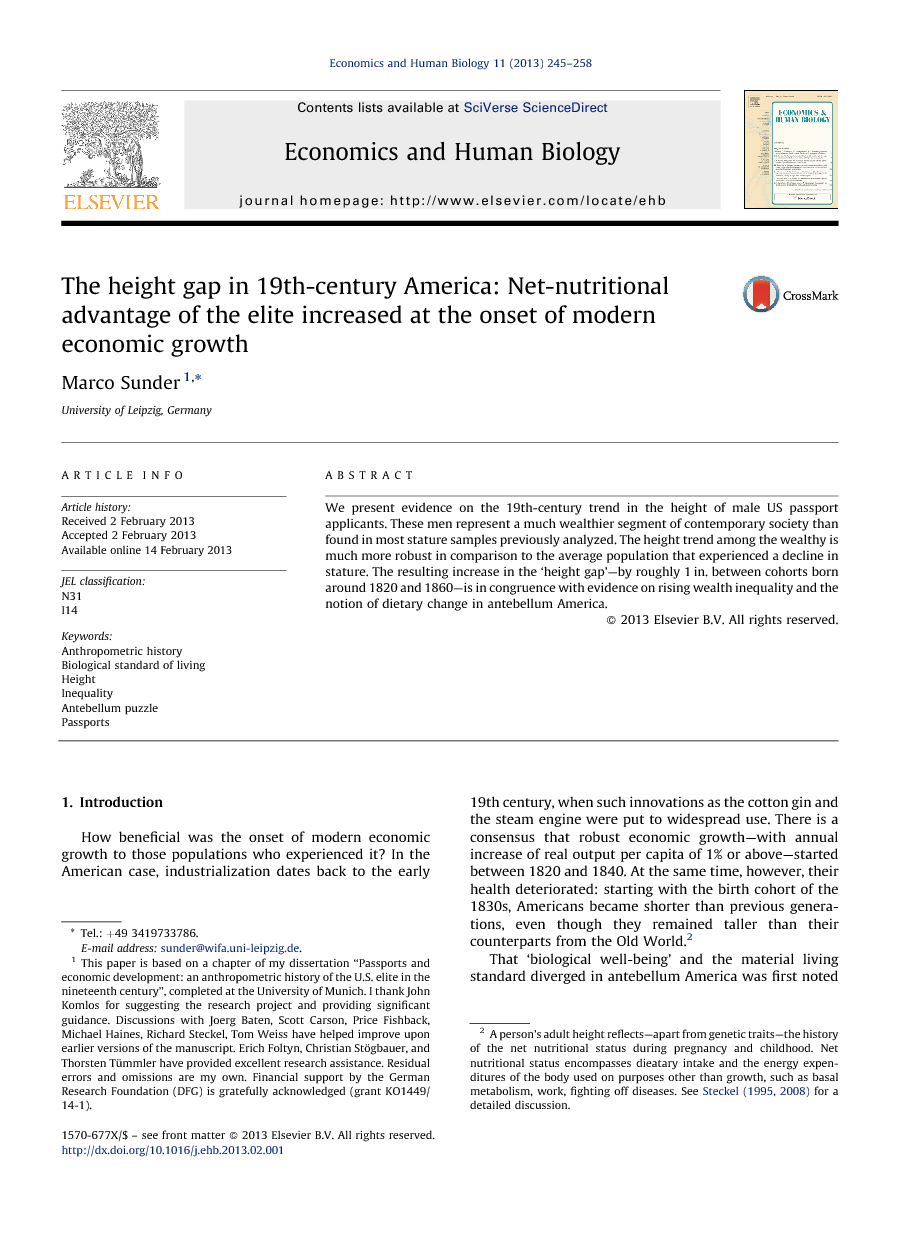 We present evidence on the 19th-century trend in the height of male US passport applicants. These men represent a much wealthier segment of contemporary society than found in most stature samples previously analyzed. The height trend among the wealthy is much more robust in comparison to the average population that experienced a decline in stature. The resulting increase in the ‘height gap’—by roughly 1 in. between cohorts born around 1820 and 1860—is in congruence with evidence on rising wealth inequality and the notion of dietary change in antebellum America.

How beneficial was the onset of modern economic growth to those populations who experienced it? In the American case, industrialization dates back to the early 19th century, when such innovations as the cotton gin and the steam engine were put to widespread use. There is a consensus that robust economic growth—with annual increase of real output per capita of 1% or above—started between 1820 and 1840. At the same time, however, their health deteriorated: starting with the birth cohort of the 1830s, Americans became shorter than previous generations, even though they remained taller than their counterparts from the Old World.2 That ‘biological well-being’ and the material living standard diverged in antebellum America was first noted by Fogel et al. (1979) and later referred to as ‘antebellum puzzle’ (Fogel, 1986, Komlos, 1987, Komlos, 1996, Pope, 1992 and A’Hearn, 1998). A considerable body of literature analyzes the source(s) of the stature decline. Most authors regard urbanization as an important element insofar as infectious diseases could spread more easily in densely populated places without adequate sanitary infrastructure. As the growth of cities depended on an inflow of migrants, new diseases could be imported easily. With such a disease-with-urbanization channel in mind, one could rationalize the deterioration of net-nutritional status (through energy claims by infectious diseases) without having to resort to lower food consumption. In contrast, Komlos, 1987, Komlos, 1996, Komlos, 1998 and Komlos, 2012 has argued in a series of articles that a declining nutritional content of the American diet is a crucial element of the ‘antebellum puzzle’. He draws a much closer connection from the transformation of the economy to the health of its population inasmuch as the income distribution became more skewed and as prices of food increased relative to prices for non-food products. A typical household that seeks to maximize utility might have curtailed food expenditure, even with average incomes rising. This notion is substantiated by the decline in estimates of per-capita production of calorie and protein ( Komlos, 1987 and Floud et al., 2011). Such an ‘endogenous’ explanation of the ‘antebellum puzzle’ does not rule out that the incidence of diseases also increased. Disagreement in the literature as to how important these channels are in relative terms persisted until recently, though. The purpose of the present paper is to discuss the pattern of physical stature of men from 19th-century America's ‘high society’, based on passport application records. The comparison of the stature trajectories among the richer and poorer segments of contemporary society sheds additional light on the ‘antebellum puzzle’. There are two identifying assumptions behind this argument. First, Logan (2006) shows in his analysis of late 19th-century consumer expenditure surveys that richer households tended to consume more calories and proteins per person, which was most likely also the case in earlier decades. An increase in the price ratio of food relative to other consumer goods would have implied an incentive for all strata to substitute away from expensive food products, but the impact on physical growth would have been negligible or even non-existent in richer families as their rising income would have more than compensated the price effect. Second, exposure to infectious diseases hardly differed by socio-economic status in antebellum America.3 However, a substantial difference in the epidemiological environment existed between birth places in cities versus the countryside (Lee, 1997).4 The reduction in mortality rates was to a considerable extent the result of cleaning up the cities and improving hygienic conditions due to a better understanding of the spread of diseases with the Bacteriological Revolution and the increasing acceptance of the germ theory of disease in late-19th century (Melosi, 2000 and Mokyr, 2002). Economic historians have analyzed various historical samples on American physical stature, most of which refer to the net-nutritional experiences of the “common man” or poorer segments of society, such as soldiers, prisoners, and slaves. However, there are notable exceptions that focus on men of the 19th-century middle and upper classes: students at military academies (Komlos, 1987, Coclanis and Komlos, 1995 and Lang and Sunder, 2003), at Harvard University (Komlos, 1987), and John Murray's work on the stature, mortality, and marriage patterns among students of Amherst college (Murray, 1997 and Murray, 2000). Lang and Sunder (2003) argue, based on data on West Point cadets, that the height trajectory of cadets from white-collar families differed meaningfully from other cadets. In a paper on the female passport applicants, we showed that women's heights in the upper socio-economic segment were exempt from the mid-19th century height decline (Sunder, 2011).

Table 2 presents OLS regression results for the full adult sample, i.e. application years 1830–1924. In order to reflect a large range of birth years (1790s–1890s), the age range was deliberately increased beyond what one would usually associate with maximum adult stature, and thus we use dummy variable at the edges of the age distribution. The cohort trend in stature is measured by a set of binary variables for decade or quinquennium of birth. The models employ a finer grid around the middle of the 19th century when observations are more plentiful. Our first specification considers whether or not an applicant was born in (or near) a major city or close to a major waterway and thus presumably had access to cheap means of transportation. Consistent with previous studies, these two factors were associated with shorter stature.17 Even though the model explains only about 1% of the variance in stature, it finds a statistically significant birth cohort pattern.To account for (persistent) regional differences in stature levels, the second model includes fixed effects for region of birth. An F-test reveals that these fixed effects are jointly significant at the 1% level. In turn, the dummy variables for city and waterway proximity are smaller in magnitude now, and only access to waterways remains significant. The resulting birth cohort trend does not differ substantially from the first model, though. The intercept is identified by scaling the fixed effects such that they exert an impact of zero on average. Fig. 6 plots the birth region effects. 18 In qualitative terms, these resemble the height-by-state pattern of World War I recruits presented by Haines and Steckel (2000), though the magnitude of spatial differences is smaller in the passport sample.