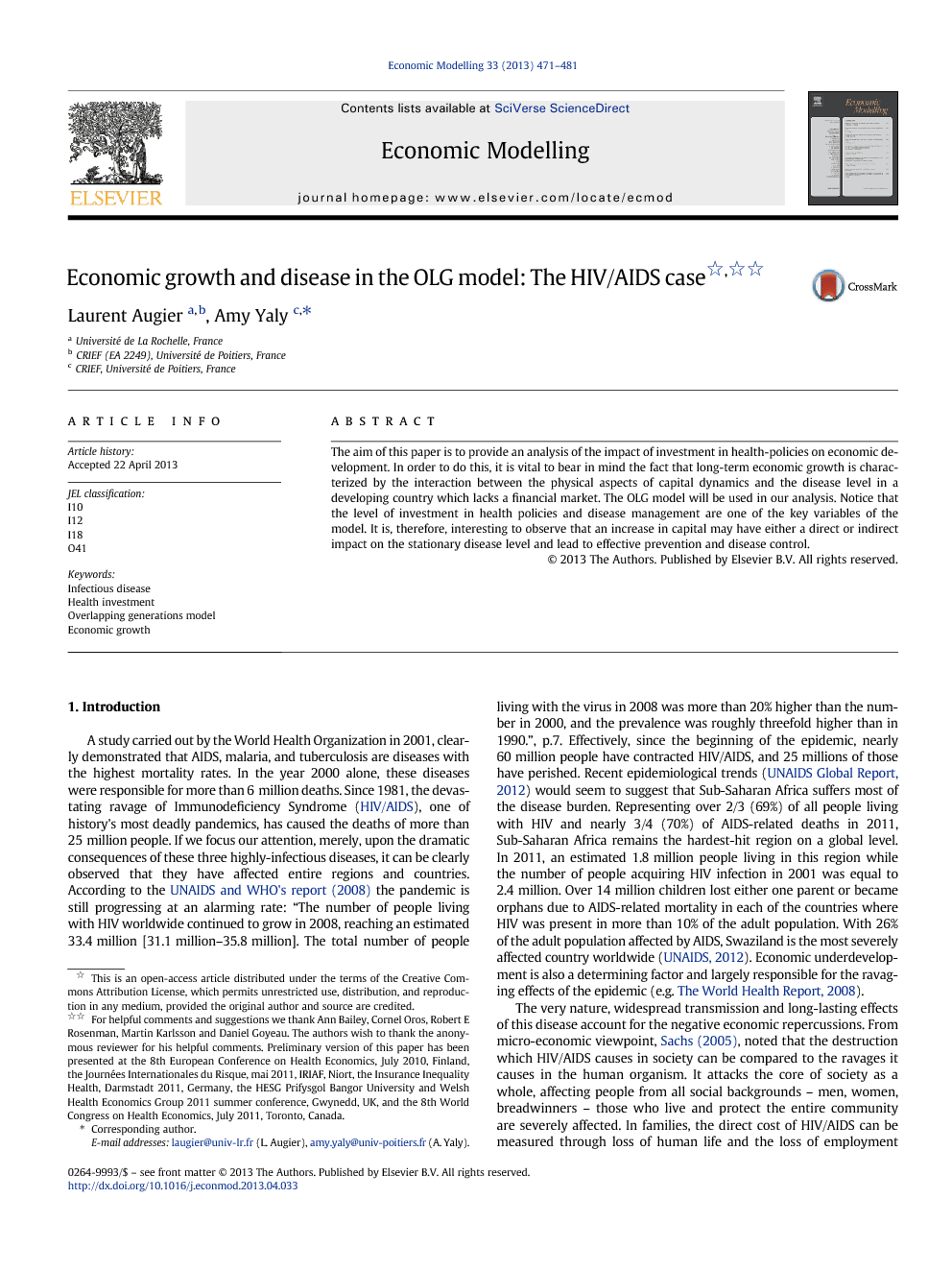 The aim of this paper is to provide an analysis of the impact of investment in health-policies on economic development. In order to do this, it is vital to bear in mind the fact that long-term economic growth is characterized by the interaction between the physical aspects of capital dynamics and the disease level in a developing country which lacks a financial market. The OLG model will be used in our analysis. Notice that the level of investment in health policies and disease management are one of the key variables of the model. It is, therefore, interesting to observe that an increase in capital may have either a direct or indirect impact on the stationary disease level and lead to effective prevention and disease control.

We care about health not only because it affects mortality, quality of life and morbidity, but also because it may affect the economic growth. This paper makes the case that poor health due to infectious diseases has effects in explaining some economic downturns. More precisely, we present a closed-economy model with overlapping-generations. We use the general equilibrium model of economic growth to study the incidence of infectious diseases. Using this model, we show that impact of infectious diseases depend on economic incentives, rational and preventive behavior. We considered the agent's preventive behavior explicitly by studying the dynamical system of this economy. Incorporating rational behavior (i.e. individual health investment) in a macroeconomic disease structure is our key theoretical innovation. Our main results are twofold. First, for a given level of capital, the disease function is characterized by a critical threshold. It may be observed that if the disease level of a country is below the critical, then the disease progressively disappears. If, however, it rises above the critical, then the increasing speed of the disease becomes a serious risk factor for the economy, and the state of the economy becomes extremely precarious. Second, when the prevalence of the disease intensifies, it can be observed that the trajectories of the system, representing the economy, diverge towards the long-term equilibrium. The disease tends to disappear due to the relatively low initial degree of prevalence of the disease. However, in the neighborhood of the steady state where the disease level is relatively high, the trajectories of the system gradually move away from equilibrium due to the increasing the spread of disease. The trajectories of capital per capita and prevalence of the disease level, then tend to diverge. This strong finding is generated by our hypothesis of the model. An important consequence of these results is the impact of physical capital due to its influence on health investment policies and disease management. The increase in capital per capita in order to fight against disease is not always sufficient. Indeed, depending on the intensity of the disease, the increase in capital may cause an increase or decrease in aggregate health investment. For example, heightened prevalence of disease can actually dissuade an agent from investing in health even if, we assume that the representative agent's investment has potential benefits in disease management. So, rising capital per capita does not prove very effective when the disease is relatively severe: “The steady-state infection level is reduced from 0.31 to 0.19 percent and capital per capita is reduced from 4 to 3.5.”, p.491 (Cuddington et al., 1994). It is vital to take these factors into account when implementing programs and prevention campaigns to halt and reverse disease (HIV/AIDS) in developing countries. The study of comparative statics also demonstrates that long-term equilibrium is characterized by complex relation between disease level and economic growth due to the level of health investment. The macroeconomic equilibrium can be modified by changing the appropriate microeconomic variables. It is, therefore, crucial to point out that increased health investment is not always sufficient to reverse the spread of disease. It is extremely interesting to assess prevention efforts in the healthcare by investigating both the public and private sectors.