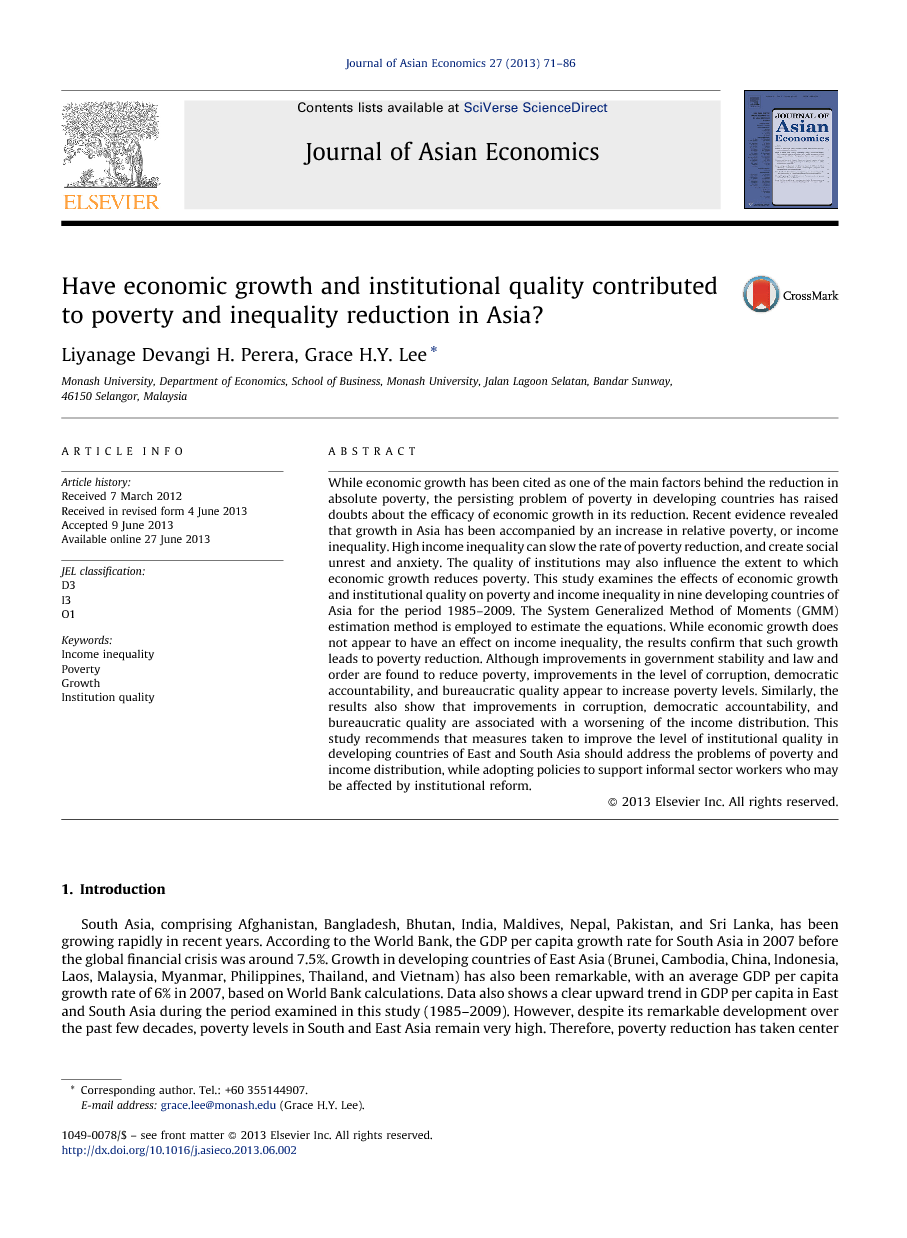 While economic growth has been cited as one of the main factors behind the reduction in absolute poverty, the persisting problem of poverty in developing countries has raised doubts about the efficacy of economic growth in its reduction. Recent evidence revealed that growth in Asia has been accompanied by an increase in relative poverty, or income inequality. High income inequality can slow the rate of poverty reduction, and create social unrest and anxiety. The quality of institutions may also influence the extent to which economic growth reduces poverty. This study examines the effects of economic growth and institutional quality on poverty and income inequality in nine developing countries of Asia for the period 1985–2009. The System Generalized Method of Moments (GMM) estimation method is employed to estimate the equations. While economic growth does not appear to have an effect on income inequality, the results confirm that such growth leads to poverty reduction. Although improvements in government stability and law and order are found to reduce poverty, improvements in the level of corruption, democratic accountability, and bureaucratic quality appear to increase poverty levels. Similarly, the results also show that improvements in corruption, democratic accountability, and bureaucratic quality are associated with a worsening of the income distribution. This study recommends that measures taken to improve the level of institutional quality in developing countries of East and South Asia should address the problems of poverty and income distribution, while adopting policies to support informal sector workers who may be affected by institutional reform.

Using data from nine developing countries in East and South Asia for the period 1985–2009, the present study examines the effect of economic growth and institutional quality on poverty and income inequality. The research questions of the study are as follows: To what extent has economic growth led to a reduction in poverty in East and South Asia? Does economic growth lead to higher income inequality? Has the level of institutional quality had an influence on poverty reduction? What is the effect of institutions on inequality? The results of the system GMM estimation indicate that growth leaves the income distribution unchanged. Therefore, it is quite likely that growth will be accompanied by a reduction in poverty levels. Although previous studies have also observed that growth is effective in reducing poverty, it is important to emphasize this finding in light of recent debates on the issue and the mixed results reported in the literature. Despite the examination of the growth-poverty relationship in past studies, these previous studies use data from several countries across regions; hence, their elasticities apply to all countries globally. The present study, however, examines the elasticity of poverty reduction for the Asian region specifically and estimates it to be around −4.21 and −6.09, which is quite high compared to previous global estimates. Therefore, this study also reveals that poverty can reduce considerably with economic growth in the Asian region compared to other regions. As a result, pro-growth policies should be central to poverty-reduction strategies in East and South Asia. Policies such as openness to international trade, financial development, and macroeconomic stability have been found to leave the income distribution unchanged, and would therefore contribute to poverty reduction (Dollar and Kraay, 2002 and Dollar and Kraay, 2003). Dollar and Kraay, 2002 and Dollar and Kraay, 2003 concluded that such policies create a favorable environment for poor households, as well as others, to increase their production and income. For example, greater trade openness can increase average incomes that translate into economic growth in the medium term and, in the long run, this can lead to higher productivity and more rapid growth (Bussolo & Nicita, 2009). Nevertheless, it cannot be asserted that economic growth is always be good for the poor or that none of the poor would be badly affected by pro-growth policy reform (Bruno et al., 1996). This study, then, examines the effect of growth on an aggregate measure of income inequality (the Gini coefficient). On average, it can be concluded that growth tends to leave the income distribution unchanged, and would thus contribute to poverty reduction. However, in view of recent increases in inequality, policies that specifically address the income distribution are recommended. Social assistance schemes are one such strategy that target the poor and can improve the income distribution. According to Walker and Pellissery (2008), social assistance schemes in Asia are still comparatively rare. Such schemes must be able to alleviate the consequences of collective and individual crises, prevent a decline in the living standards of the poor, and assist those who face constant vulnerability due to disability, severe illness, old age, or neglect. System GMM estimation also revealed that improvements in government stability and law and order are found to reduce poverty. But the interesting findings of this study are the positive relationships between corruption, democratic accountability, bureaucratic quality, and poverty and income inequality. This study finds that improvements in these three institutional measures tend to worsen poverty levels and increase income inequality. Fighting corruption is costly as it uses up resources that could have been utilized more productively elsewhere, and in certain countries, corruption may not be so harmful. Therefore, it is important to analyze and understand the nature of corruption in individual countries before anti-corruption strategies are adopted. On the contrary, in the long term, whether corruption is degenerative or developmental, it will ultimately lead to lower economic growth with the beneficial effects of developmental corruption most likely offset by its negative effects. Hence, this study recommends that the level of corruption needs to be reduced to ensure sustained economic growth and faster poverty reduction. Similarly, even though the findings of this study indicate that improvements in democratic accountability and bureaucratic quality will increase income inequality and poverty, measures must be taken to improve the quality of institutions. Better quality institutions will encourage foreign direct investment, promoting economic growth and poverty reduction. They can also increase the efficiency and effectiveness of the delivery of social services to the poor. At the same time, it is important to adopt policies that specifically address income distribution to prevent any increases in income inequality. However, since institutional reform may impose additional costs on the informal sector, policies that improve the welfare of those in the informal economy and encourage them to move to the formal economy must be implemented. Becker (2004) claimed that efforts to reduce poverty would not be successful unless employment needs and the vulnerability of workers in the informal sector are addressed. Therefore, governments should create suitable macroeconomic, social, legal and political environments that foster the “large-scale creation of sustainable, decent jobs and business opportunities” (Becker, 2004, p. 28). Informal workers must also have access to education, training, microfinance, and such programs must be well-designed and implemented to help these workers move to the formal sector where they are protected by the legal and institutional framework. International donors could also help governments formulate and implement national policies to assist informal workers in the transition to the formal economy, and assist governments by guaranteeing that policies and programs reach the most vulnerable groups (Becker, 2004).