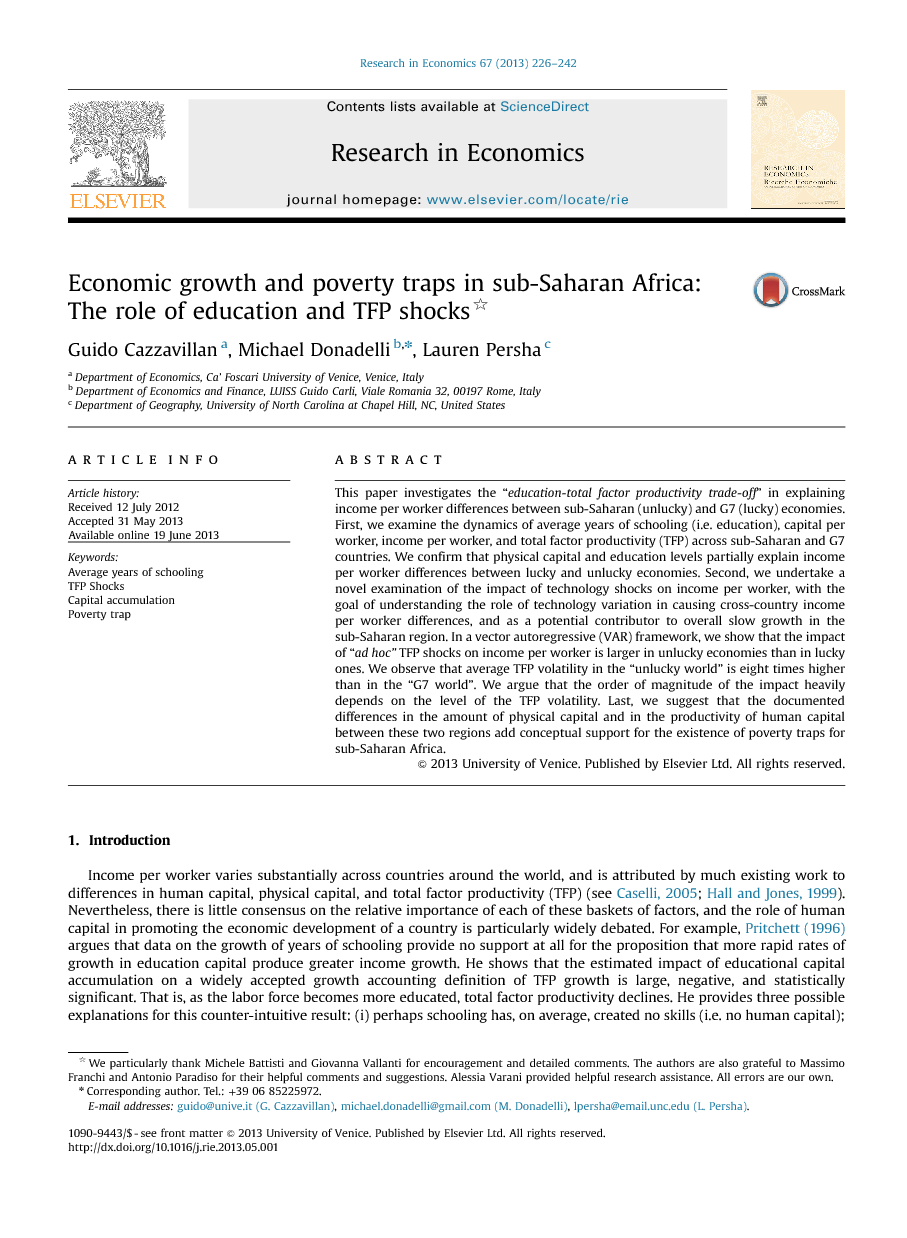 This paper investigates the “education-total factor productivity trade-off” in explaining income per worker differences between sub-Saharan (unlucky) and G7 (lucky) economies. First, we examine the dynamics of average years of schooling (i.e. education), capital per worker, income per worker, and total factor productivity (TFP) across sub-Saharan and G7 countries. We confirm that physical capital and education levels partially explain income per worker differences between lucky and unlucky economies. Second, we undertake a novel examination of the impact of technology shocks on income per worker, with the goal of understanding the role of technology variation in causing cross-country income per worker differences, and as a potential contributor to overall slow growth in the sub-Saharan region. In a vector autoregressive (VAR) framework, we show that the impact of “ad hoc” TFP shocks on income per worker is larger in unlucky economies than in lucky ones. We observe that average TFP volatility in the “unlucky world” is eight times higher than in the “G7 world”. We argue that the order of magnitude of the impact heavily depends on the level of the TFP volatility. Last, we suggest that the documented differences in the amount of physical capital and in the productivity of human capital between these two regions add conceptual support for the existence of poverty traps for sub-Saharan Africa.

The roles of education and TFP in helping to explain cross-country income differences have been widely discussed and documented in the economic growth literature,14 even as very high income inequalities continue to persist between advanced and poor economies. In this relatively simple analysis, we confirm that the TFP (i.e. Solow’s residual) seems to explain a larger portion of the income gap between Sub-Saharan and G7 economies than education (i.e. average years of schooling). On average the TFP in the unlucky world accounts only for 27% of the US TFP. Capital and education account for 39.4% and 60% respectively. Thus, it appears that income inequalities are driven more by differences in technological progress and physical capital, while education differences account only residually. We show that negative TFP uncertainty shocks, once they occur, further depress income per worker in the sub-Saharan zone, conceivably generating a feedback mechanism by which poorer countries continue to grow slowly. The magnitude of the impulse generated by the shock is on average much higher in the unlucky world than in the lucky one. We argue that the TFP volatility level affects the order of magnitude of the impact. In other words, the effect of large changes in the TFP level on a relatively low income per worker growth rate is higher than in an economy with a high income per worker growth rate. To conclude, we suggest that large differences in capital per worker and very low levels in the productivity of human capital across these two world regions adds conceptual support for the existence of poverty traps for Sub-Saharan Africa. Further work to understand how technology accumulation differences and shocks might mechanistically contribute to trap dynamics could help to elucidate appropriate policy responses for more sustained economic growth.