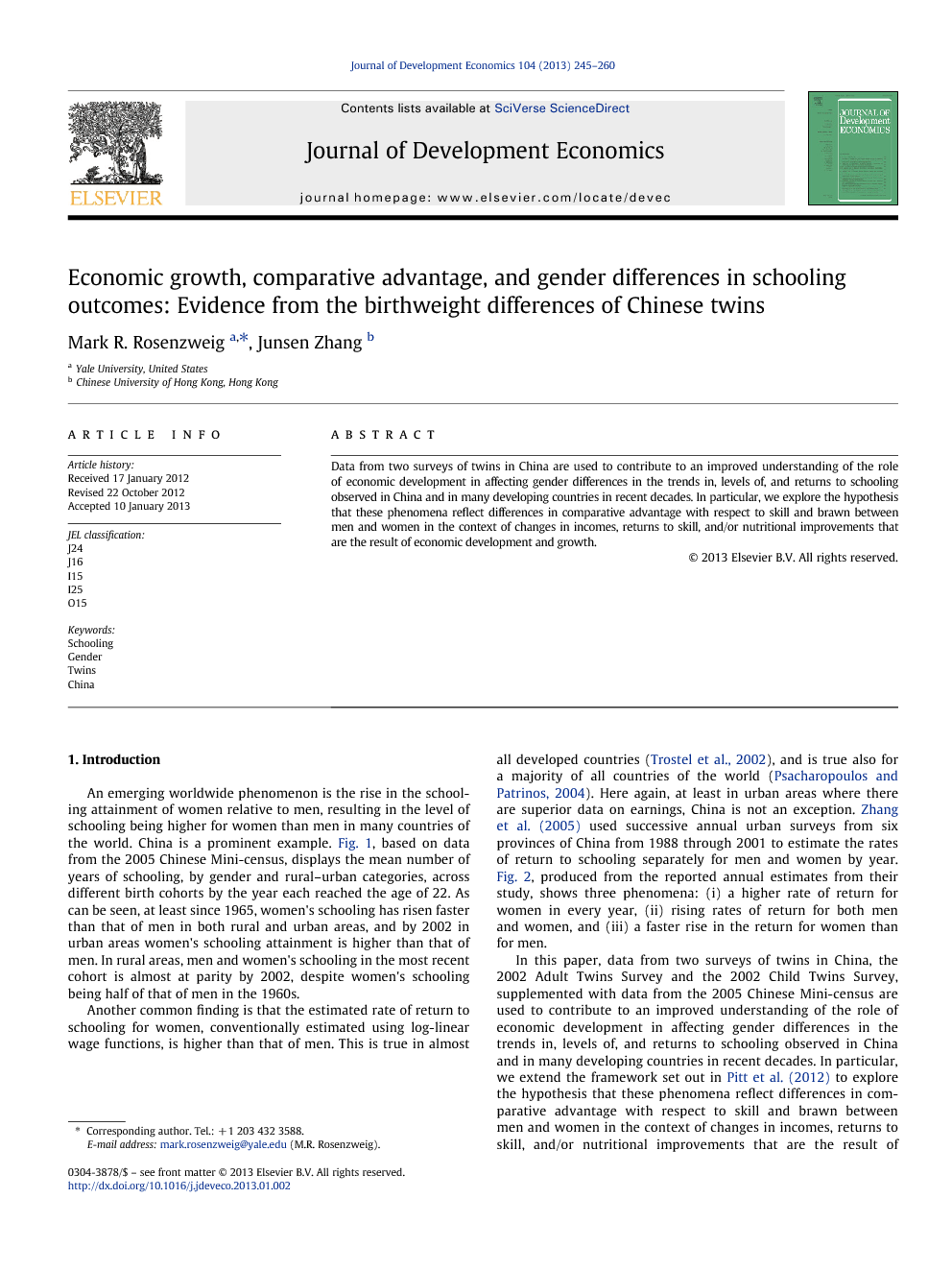 Data from two surveys of twins in China are used to contribute to an improved understanding of the role of economic development in affecting gender differences in the trends in, levels of, and returns to schooling observed in China and in many developing countries in recent decades. In particular, we explore the hypothesis that these phenomena reflect differences in comparative advantage with respect to skill and brawn between men and women in the context of changes in incomes, returns to skill, and/or nutritional improvements that are the result of economic development and growth.

In this paper, estimates of the gender-specific effects of birthweight on a variety of schooling and labor market outcomes obtained from data from two surveys of twins in China were used to contribute to an improved understanding of gender differences in the trends in, levels of and returns to schooling observed in many developing countries in recent decades. In China, these include the rise in the levels of female schooling relative to male schooling, the higher level of female schooling, and the higher and rising returns to female schooling compared to male schooling in the urban labor market. Using a simple model of schooling and occupational choice incorporating well-established biological differences in brawn between males and females, we showed that the comparative advantage of women in skill is reflected in their greater schooling investment and the selection of more skill-intensive occupations than men. We also showed that comparative advantage in skill is manifested in differences in the relationship between birthweight and schooling between males and females and that these differences reflect changes in the skill-intensity of the occupational structure in the aggregate economy as well as income changes. In the case of China, we showed, using unique information on the time-of-marriage occupations of birth-cohorts spanning the period between the early 1970s and 2002, that China's occupational structure since the 1980s has become more skill-intensive in urban areas. The model we used indicated that the rise in the relative value of skill to brawn would increase the schooling of females relative to males, increase specialization according to comparative advantage, with women entering the skill-intensive occupations at a faster rate than men, and increase the effects of early nutritional advantages on schooling for females relative to males. We showed that all of these phenomena are observed in China. The greater and rising participation of women in skill-intensive occupations is also consistent with the relative rise in the estimated returns to schooling of women in urban areas of China. Our framework and findings have implications for the effects of growth policy on the male–female wage gap. For example, economic growth policies that stress industrialization will alter the occupational mix in favor of less brawn-intensive jobs, which favors women, who have a comparative advantage in skill. If economic development increases the relative demand for skill-based work, the gender wage gap should diminish. However, our estimates also indicated that in urban China brawn is still valued in the labor market. Given that men have an absolute advantage in brawn, this means that despite the higher levels of schooling of women compared to men, men may continue to earn higher wages than women even where industrialization has taken place. However, it is important to note that not all economic growth strategies devalue brawn relative to skill. Growth facilitated by improvements in the productivity of seeds in agriculture, for example, in the absence of other changes, increases the demand for manual labor and thus may not reduce the male–female wage gap. Finally, a unique feature of our study was to use micro evidence on the relationship between birthweight, an early measure of nutritional advantage, and schooling outcomes in different contexts to make inferences about the relationships between specific aspects of economic growth and schooling investments and returns. Even our very simple model of schooling investment and occupational selection, consistent with our findings, indicates that estimates of the effects of childhood nutrition on measures of human capital investment, whether based on randomized interventions or natural experiments, will not only differ by gender but also by context. Simple linear estimates obtained from a particular country on the outcomes of early-childhood nutritional interventions will thus not be generalizable unless care is taken to understand both the level of development and the macro structure.