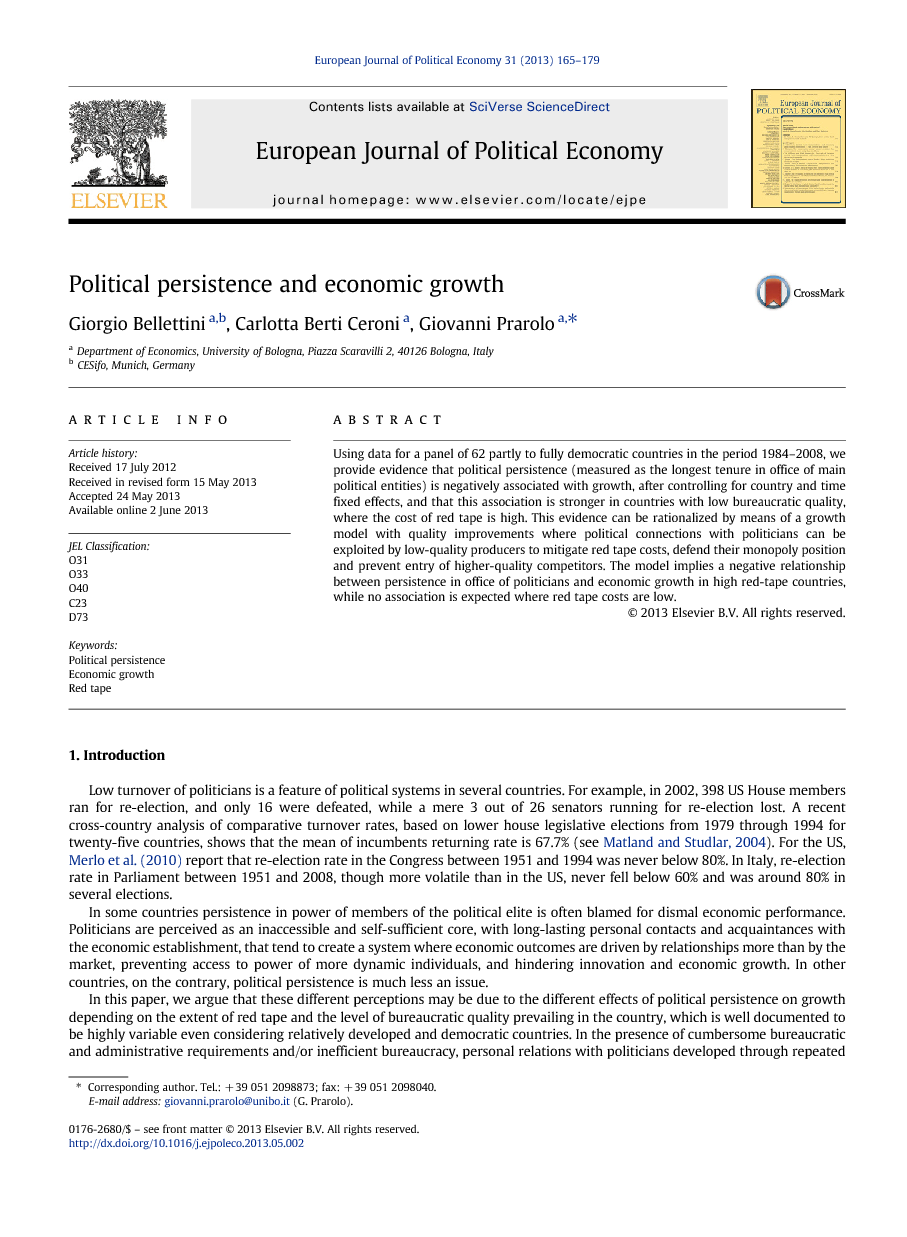 Using data for a panel of 62 partly to fully democratic countries in the period 1984–2008, we provide evidence that political persistence (measured as the longest tenure in office of main political entities) is negatively associated with growth, after controlling for country and time fixed effects, and that this association is stronger in countries with low bureaucratic quality, where the cost of red tape is high. This evidence can be rationalized by means of a growth model with quality improvements where political connections with politicians can be exploited by low-quality producers to mitigate red tape costs, defend their monopoly position and prevent entry of higher-quality competitors. The model implies a negative relationship between persistence in office of politicians and economic growth in high red-tape countries, while no association is expected where red tape costs are low.

Excessive regulatory and administrative burdens due to cumbersome regulatory and administrative requirements and/or inefficient bureaucracy are often pointed out as a major hindrance to growth as they subtract resources to investment and innovation and represent a barrier to entry for new firms and superior technologies. In this paper, we consider red tape as a production cost for firms that can be mitigated through political connections in a relationship-based system where operating firms face lower marginal costs than potential competitors. Thus, incumbent firms may be able to prevent entry of superior technologies if they can exploit their political connections, that is, if politicians do not change too frequently. For the society as a whole, this creates a trade-off between short-run benefits of keeping the status quo and enjoying low prices and long-run costs of postponing technological upgrade. Our theoretical analysis suggests that the magnitude of red tape costs plays a crucial role in determining whether we should expect a relationship between the frequency of political change and economic growth. When red tape costs are high, the advantage granted by political connections allows the incumbent to maintain her dominant position and prevent adoption of superior technologies, implying a negative relationship between political persistence and economic growth. Instead, when red tape costs are low, political connections become irrelevant, innovation takes place irrespective of political turnouts and political persistence and economic growth are unrelated. In the empirical part of the paper, we provide evidence of a differential relationship between political persistence (that we measure as the longest tenure in office among main political entities) and economic growth, depending on red tape costs prevailing in the country. Using the quality of bureaucracy as inverse measure of red tape costs, we classify 62 countries with relatively high political and civil rights according to Freedom House for which data are available over the 1984–2008 period into two groups, high and low red tape cost, and estimate the coefficients of political persistence for the two groups. Consistent with the theoretical analysis, we find that political persistence is negatively associated with growth in the high-cost group, but not in the low-cost group. These findings are obtained controlling for country and time fixed effects, and are robust to several robustness checks.