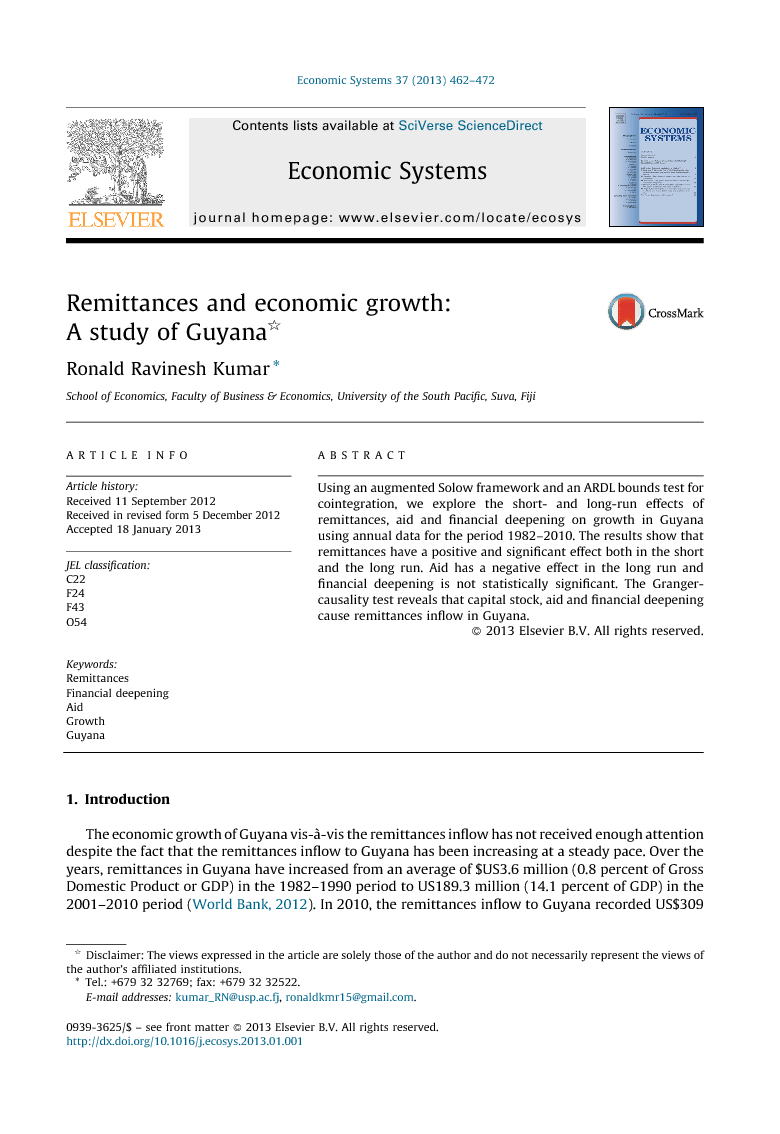 The economic growth of Guyana vis-à-vis the remittances inflow has not received enough attention despite the fact that the remittances inflow to Guyana has been increasing at a steady pace. Over the years, remittances in Guyana have increased from an average of $US3.6 million (0.8 percent of Gross Domestic Product or GDP) in the 1982–1990 period to US189.3 million (14.1 percent of GDP) in the 2001–2010 period (World Bank, 2012). In 2010, the remittances inflow to Guyana recorded US$309 million (13.7 percent of GDP) and was ranked 16th in the World in relative terms. Nevertheless, these inflows are understated because a significant amount of remittances flow through informal channels. The major remittance markets are USA (68%), U.K. (11%), and Canada (10%), among others (Debra, 2006 and World Bank, 2012). A summary of Guyana's economic profile is given in Table 1.As noted in Fig. 1, although there is a slight increase in domestic credit between 1982 and 2003, it has remained below 65 percent of GDP. Moreover, there has been some volatility in aid inflows (ODA as a percent of GDP) over the sample period. On the other hand, the remittances inflow has increased significantly since early 2000. It is also noted that the remittances inflow has been relatively stable, indicating some resilience from economic shocks.The role of remittances in economic growth has been studied vastly. However, in the case of Guyana, the subject is not well explored. Subsequently, in this paper, we advance our study by exploring the nexus between remittances, financial deepening and official development assistance (ODA) vis-à-vis growth. We hypothesize that the remittances inflow has a plausible positive effect on growth in Guyana given its history of migration and the recent surge in remittances. However, we give equal importance to the role of financial deepening measured by domestic credit to private sectors and aid in the development process. However, their respective impacts will depend on the degree of financial depth and aid management and deployment strategies over the years, respectively. The structure of the article is as follows. Section 2 provides a brief literature survey on selected variables. Section 3 discusses the method and data. Section 4 provides regression and Granger-causality test results. Conclusions with some limitations are presented in Section 5.

Using the augmented Solow framework (Rao, 2010 and Rao and Hassan, 2012b), bounds procedure, and Granger-causality test, we explored the plausible nexus between remittances, aid and financial deepening vis-à-vis growth in Guyana. Our study used annual data from 1982 to 2010. The results show that the remittances inflow is positive and statistically significant in both the short and the long run. Therefore, our study posits that remittances matter for countries like Guyana, which has a relatively small economy and a developing financial sector (Diego, 2009, Giuliano and Ruiz-Arranz, 2009 and Mundaca, 2009). On the other hand, the effect of aid (ODA) on growth is not significant in the short run and negative in the long run, thus calling for a more vigilant look at the aid deployment and management aspects. The effect of financial deepening is not significant in our results. This is plausible because of the low share of domestic credit (as a percent of GDP) over the sample period, which is indicative of weak financial intermediation (Diego, 2009). Subsequently, one may consider the possibility of expanding credit and linking the remittances inflow with cost-effective financial services including remittance transfer services. The Granger-causality test provides some important linkages worth noting. We find that capital stock causes output, aid causes capital stock, capital stock, aid and financial deepening cause remittances inflow, and output causes financial deepening. However, there are some limitations to our study. Firstly, given the paucity of data on remittances, our analysis was confined to a relatively small sample size. We used a relatively high depreciation rate to compute capital stock in order to ensure that per worker capital stock exhibits diminishing returns to scale over time. Furthermore, our long-run capital share is 0.689 (68.9%), which is relatively higher than the usual stylized value of 0.33 (33.3%). A relatively high capital share is due to a couple of reasons. Firstly, when capital and labor inputs tend to grow at relatively similar rates; secondly, when economies of developing countries such as Guyana have large numbers of self-employed persons who derive income from both capital and their own labor, thus making it difficult to obtain meaningful measures of income shares; and, thirdly, because of the poor quality of data and the small sample size (Bosworth and Collins, 2008). We concur with all the aforementioned reasons in our study. Finally, we did not explore the interaction effect of remittances with financial development and its consequent impact on growth because of the small sample size resulting in multicollinearity problems. Nevertheless, we hope that our specifications based on the Solow growth model and methods of analysis to estimate the long-run growth effects of remittances, aid and financial deepening will interest others working on the sources of growth in Guyana and other developing countries.