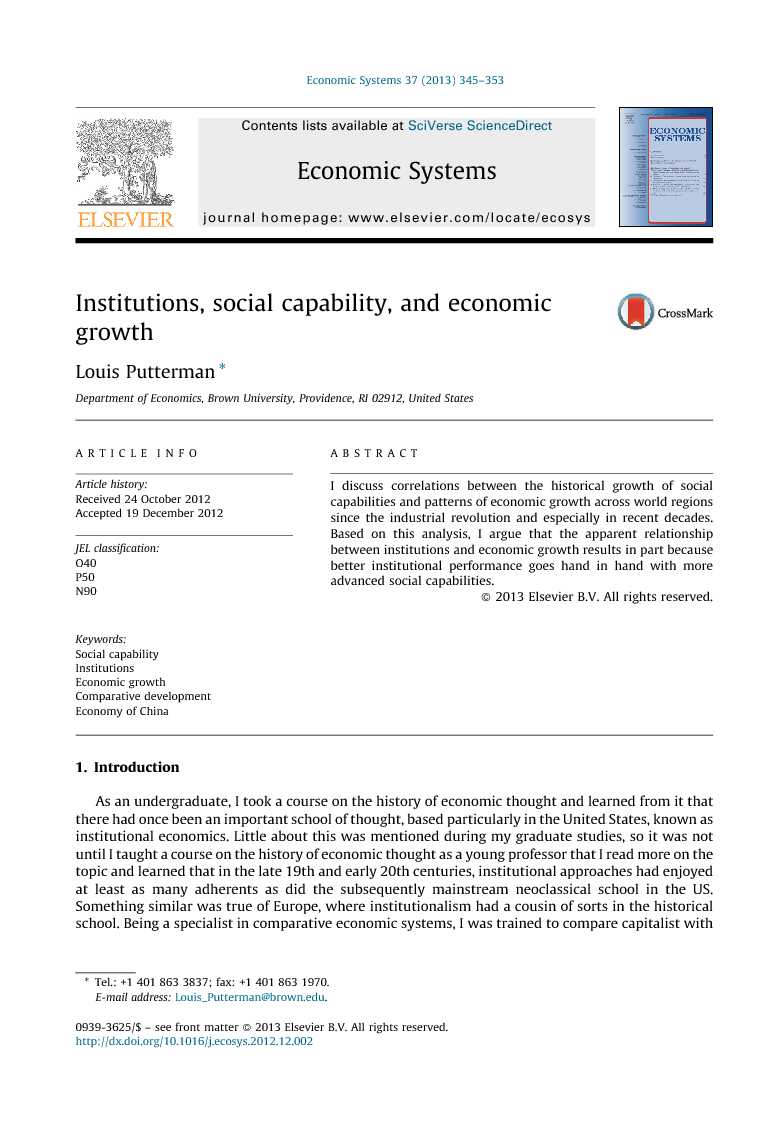 I discuss correlations between the historical growth of social capabilities and patterns of economic growth across world regions since the industrial revolution and especially in recent decades. Based on this analysis, I argue that the apparent relationship between institutions and economic growth results in part because better institutional performance goes hand in hand with more advanced social capabilities.

As an undergraduate, I took a course on the history of economic thought and learned from it that there had once been an important school of thought, based particularly in the United States, known as institutional economics. Little about this was mentioned during my graduate studies, so it was not until I taught a course on the history of economic thought as a young professor that I read more on the topic and learned that in the late 19th and early 20th centuries, institutional approaches had enjoyed at least as many adherents as did the subsequently mainstream neoclassical school in the US. Something similar was true of Europe, where institutionalism had a cousin of sorts in the historical school. Being a specialist in comparative economic systems, I was trained to compare capitalist with socialist economies, so institutions and formal economic arrangements were never far from my attention. But in the 1970s and 1980s, the concept of institutions seemed to have little place in the economics discipline outside of the comparative systems field and the specialized literature of “new institutional economics”. This inattention to institutions by mainstream economists began to change with the collapse of Communism in Eastern Europe and the Soviet Union at the end of the 1980s. When rapid privatization failed to lead to the quick emergence of vibrant market economies in some ex-Communist countries, economists turned to both economic institutions and aspects of economic culture, such as corruption and social capital, to explain what was going wrong. Privatizing firms and freeing prices were not sufficient to create a well-functioning market economy, one began to hear; rule of law, tax compliance, resistance to corruption, and trust were also required (see, for example, Murrell, 1995). By the early 2000s, economic institutions had emerged as a major contender for explaining the differences in economic achievement and growth among the world's countries. A debate about whether institutions, geography, or something else determines long-term economic growth has been waged since the late 1990s by economists such as Jeffrey Sachs, William Easterly, Rafael LaPorta, and Daron Acemoglu. While the existence of such a debate is encouraging, its contents have sometimes been less so. The new institutional economists were reasonably concrete about the institutions they discussed, including private property rights and the M-form corporation. Comparative systems scholars defined economic systems in terms of constellations of institutions; for instance, the (soviet-type) centrally planned economy included as its pillars state ownership of the major means of production, economic coordination by bureaucratic planning and bargaining rather than markets, and a monopoly on power by a Communist party. As another example, Western European social democracy's institutions included private ownership of means of production, markets as the main coordination device, and provision of welfare benefits and services by a democratically-elected government raising revenues via taxation. In the literature on economic growth, in contrast, institutions are often accorded considerable importance, but they tend to be defined unclearly. Favorite empirical indicators of “institutions” have been security of property from risk of government expropriation, assessments of the quality of government bureaucracy, absence of corruption, and constraints on powers of the executive branch. Most of these are qualitative indicators that reflect adherence to norms or aspects of economic culture, rather than structural measures of the presence or absence of specific formal rules, bodies, or mechanisms. The line between institutions and culture is thus unclear. Perhaps that is as it should be, but if so, we also need to recognize the unsustainability of the argument that only institutions matter. As attention to institutions has shifted from specialist students of economic organization to generalist students of economic growth, there has also been a tendency to lump institutions into coarse categories, epitomized by Acemoglu and Robinson (2012) distinction between “inclusive” and “extractive” institutions. Why Nations Fail is perhaps aimed at a general audience, making it unfair to hold it to scholarly standards. But it does appear to be an extension of the scholarly work of Acemoglu et al., 2001 and Acemoglu et al., 2002, which introduced the “extractive” institutions category and contrasted it with “institutions of private property”. Acemoglu and Robinson group Stalin's Russia, 1990s China, and Mobutu's Zaire under the same “extractive institutions” label, but the first was a quintessential command economy with maximum suppression of markets and decentralized pricing, China of the 1990s lay closer to the state-led capitalism of 1960s South Korea, and Mobutu's was a petty dictatorship monopolizing control over mining and a few other sectors with no effort to eliminate the market economy per se. Why Nations Fail is also troubling in its insistence on looking for single causes, rather than investigating the degree of influence and the nature of the interactions between the various factors that influence economic growth. In these remarks, I will describe an approach in which geography, social capabilities (a concept that can encompass but is much broader than norms), and institutions (whose operation is much influenced by social capabilities) are interconnected determinants of growth. I’ll suggest how that view helps to explain the differences in outcomes among countries and global regions including those in the Americas, in sub-Saharan Africa, and among former Communist countries. Toward the end, I’ll provide particular observations about China.

Modern economic growth, a process that began with the industrial revolution in the 19th century and that brought levels of prosperity never previously seen to the majority of people in many countries, has reflected definite geographic and cultural contours in the course of its diffusion. Although institutional factors may have played an important role in determining that the process began in Britain, broader social and cultural factors may well have been equally important. That the revolution would take place in Eurasia could have been predicted with reasonable confidence two millennia earlier; and that it would take place in Western Europe became considerably more likely with the onset of Atlantic exploration, colonization, and trade in the late 15th century. Once it began, modern growth spread rapidly to England's offshoots and neighbors, advanced more unevenly in other parts of Europe and their overseas territories, and spread little to the non-European world. The Japanese exception became a new center of diffusion, initially by conquest, to many of its own Far East neighbors. While sustained modern growth has required an institutional framework permitting individuals to profit from their efforts and using markets as the principal economic coordinating device, the capacity for growth is mainly social. As Abramovitz (1986) wrote in response to the puzzle of “convergence,” “a country's potential for rapid growth is strong not when it is backward without qualification, but rather when it is technologically backward but socially advanced”. This was a prescient comment for the 1980s, when it might have been used mainly to describe the then contemporary successes of South Korea and Taiwan. In hindsight, we can see that it well anticipated the subsequent growth of giants China and India. Which countries had greater potential for rapid modern growth in the late 20th century had largely been determined as early as 1500, although political and institutional factors continued to delay growth in some candidate states. What of the countries peopled by groups that were already well behind in the social capability sweepstakes in 1500: by the Africans of the sub-Saharan countries and their diaspora in the Caribbean, by the Amerindians of Central America and the Andes, by the Papuans of New Guinea and the Austronesians of the Indian and Pacific Oceans? Does being behind by centuries or even millennia in terms of technology, economy, and political systems mean that catching up will also take centuries? Not necessarily. Their falling behind was strung out over thousands of years due to geography and the nature of pre-modern transportation and communication technologies. Their disadvantage was then amplified and extended for centuries longer by the absence of international constraints against colonial exploitation by their “technological betters”. But in a world with far more rapid dissemination of ideas and still increasing social pressure against the exploitation of poor countries by rich, their catching up could yet be surprisingly rapid.