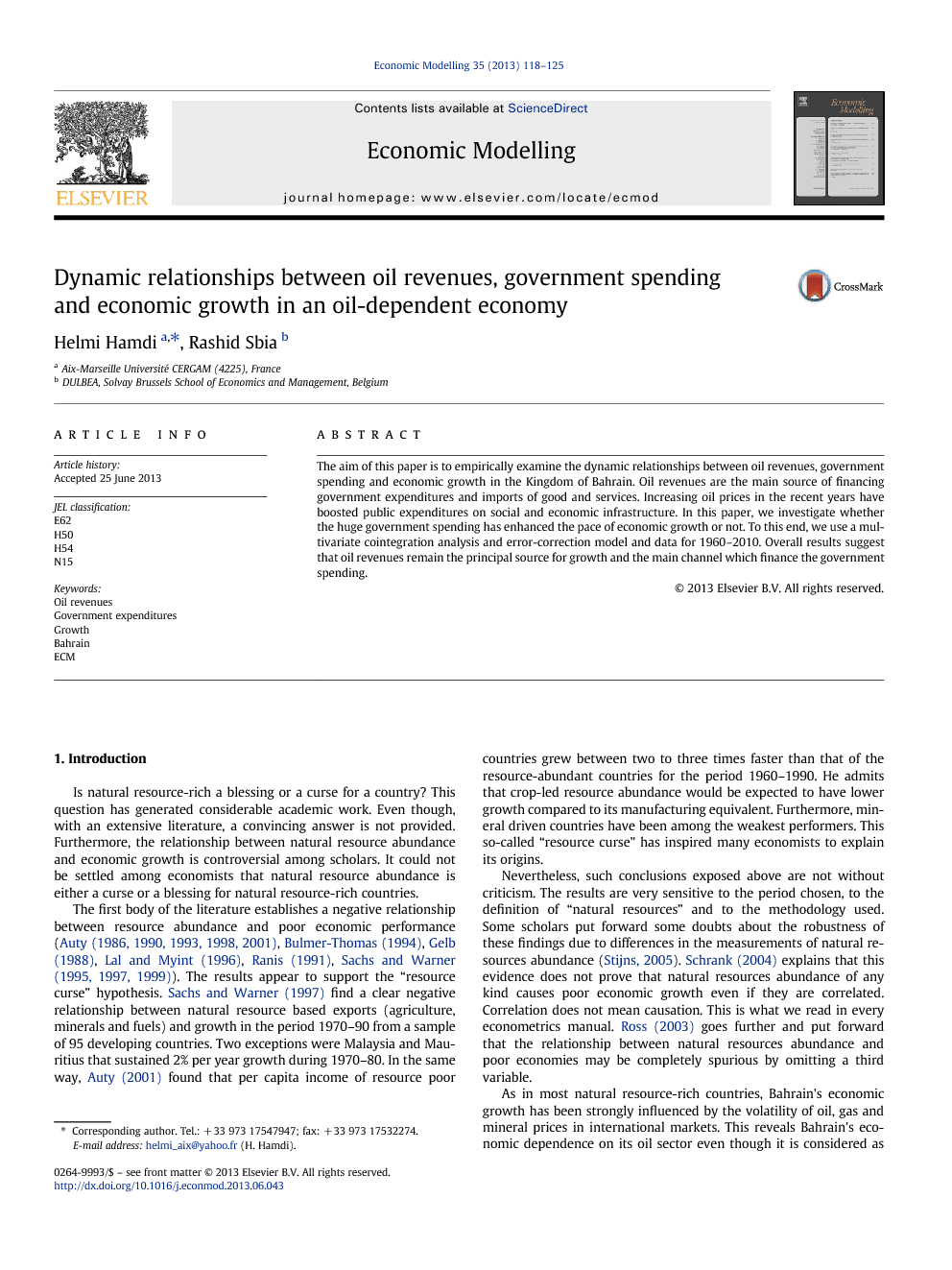 The aim of this paper is to empirically examine the dynamic relationships between oil revenues, government spending and economic growth in the Kingdom of Bahrain. Oil revenues are the main source of financing government expenditures and imports of good and services. Increasing oil prices in the recent years have boosted public expenditures on social and economic infrastructure. In this paper, we investigate whether the huge government spending has enhanced the pace of economic growth or not. To this end, we use a multivariate cointegration analysis and error-correction model and data for 1960–2010. Overall results suggest that oil revenues remain the principal source for growth and the main channel which finance the government spending.

The 2008 financial turmoil and the ongoing sovereign debt crisis have renewed the debate on the role of fiscal policy in stimulating economic growth and have also raised serious concerns among the policy makers around the world because of its adverse impacts. This is because the effectiveness of fiscal policy is very sensitive to a large set of factors. Further, its role in absorbing shocks relies on the size of fiscal multiplier (Espinoza and Senhadji, 2011). This fact is pertinent for the case of Bahrain as a small state with monetary policy based on the fixed exchange rate. Therefore, this was the motivation of this study. Precisely, we set out to investigate the dynamic relationships between oil revenues, total government expenditures and economic growth in the Kingdom of Bahrain. We used annual time series data from 1960 to 2010 and we performed an econometric model based on the cointegration analysis and error-correction model. The estimations were made to obtain both short and long-run results. The time series diagnostics were investigated before the estimation and the stability tests were conducted to confirm the robustness of results. The Johansen method of cointegration confirmed the existence of a unique long-run relationship among the variables. The long-run results indicate that coefficients of total government expenditures and oil revenues' variables are statistically significant. The results for short-run, however, show that oil revenue is the only significant variable. The value of the coefficient of the ECT is − 0.276 of the GDP which is statistically significant at 5%. This suggests that the convergence is moving fast enough towards the long-run equilibrium. The study also finds uni-directional causalities running from oil revenues to GDP. The results appear robust and might be useful to policy makers for different reasons. Firstly, Bahrain as a small open economy and an oil-dependent country, is facing a number of specific challenges, stemming mainly from the fact that oil revenues, which constitute the bulk of government revenues, are exhaustible, volatile, uncertain and largely originate from external demand (Sturm et al., 2009). Therefore, Bahrain is highly exposed to external shocks such as oil shocks. Literature on small states,9 suggests that those countries are very vulnerable to external events and face major challenges. They are heavily exposed to the global market behavior and have limited diversification opportunities because of their small domestic markets (World Bank, 2000). Secondly, Bahrain has a limited monetary policy because of the dollar-pegging regime and thus the fiscal multipliers could be weak due to substantial leakages through remittances and imports (Espinoza and Senhadji, 2011). Consequently, to overcome these drawbacks the government of Bahrain should adopt further structural reforms that promote non-oil sector development independently from government spending.10 The government would need to continue its structural adjustment efforts to encourage diversification of the economy,11 to broaden and deepen the financial market and to improve the effectiveness of the public sector. It is well-known that Bahrain is the most diversified economy in the GCC region. However, as oil is an exhaustible natural resource, further diversification of the economy appears to be a must. This would reduce the sudden shock in oil prices and would make the economy less reliant on energy resources. Here, the government has to strengthen its efforts in encouraging the development of the private sector by ensuring proper environment and adequate strategies. The Gulf Cooperation Countries' common plan to implement a large tax system could be a good instrument to reduce the effect of oil price volatility. Further work is needed in terms of automatic stabilizers.