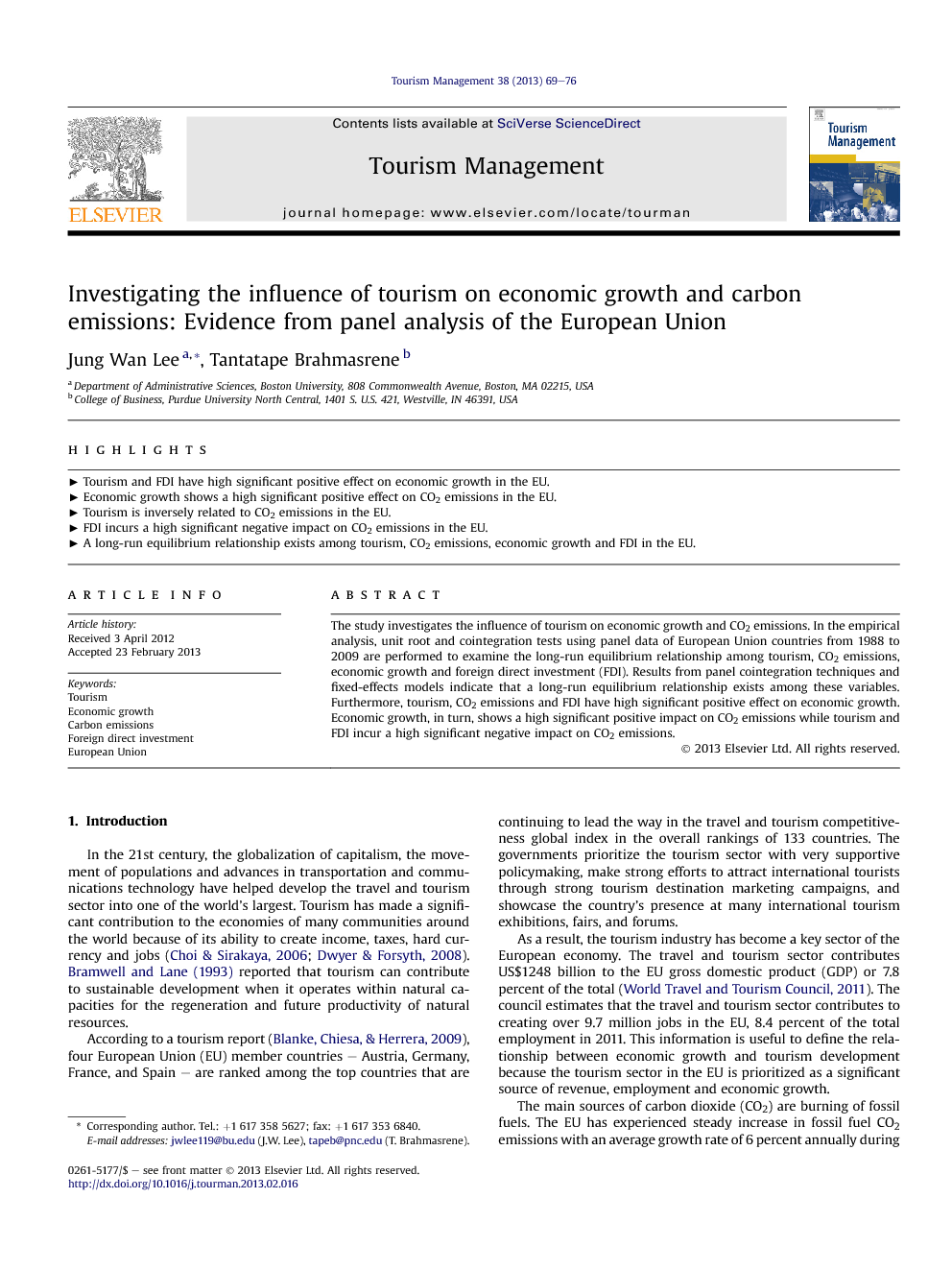 In the 21st century, the globalization of capitalism, the movement of populations and advances in transportation and communications technology have helped develop the travel and tourism sector into one of the world's largest. Tourism has made a significant contribution to the economies of many communities around the world because of its ability to create income, taxes, hard currency and jobs (Choi & Sirakaya, 2006; Dwyer & Forsyth, 2008). Bramwell and Lane (1993) reported that tourism can contribute to sustainable development when it operates within natural capacities for the regeneration and future productivity of natural resources. According to a tourism report (Blanke, Chiesa, & Herrera, 2009), four European Union (EU) member countries – Austria, Germany, France, and Spain – are ranked among the top countries that are continuing to lead the way in the travel and tourism competitiveness global index in the overall rankings of 133 countries. The governments prioritize the tourism sector with very supportive policymaking, make strong efforts to attract international tourists through strong tourism destination marketing campaigns, and showcase the country's presence at many international tourism exhibitions, fairs, and forums. As a result, the tourism industry has become a key sector of the European economy. The travel and tourism sector contributes US$1248 billion to the EU gross domestic product (GDP) or 7.8 percent of the total (World Travel and Tourism Council, 2011). The council estimates that the travel and tourism sector contributes to creating over 9.7 million jobs in the EU, 8.4 percent of the total employment in 2011. This information is useful to define the relationship between economic growth and tourism development because the tourism sector in the EU is prioritized as a significant source of revenue, employment and economic growth. The main sources of carbon dioxide (CO2) are burning of fossil fuels. The EU has experienced steady increase in fossil fuel CO2 emissions with an average growth rate of 6 percent annually during 1990–2008 (Boden, Marland, & Andres, 2011). Among the top 20 national fossil fuel CO2 emitters, the United Kingdom, Italy, France, and Spain lead in CO2 fossil fuel emissions. In 2008 the total CO2 emissions of the EU reached 712 million metric tons. Emissions from all fuel sources have grown in the EU region over time, with gas fuels now accounting for approximately 28.1 percent of the regional total (Boden et al., 2011). Table 1 presents some context for the CO2 emissions. From 1988 to 2009, the average CO2 per capita among 27 EU members is 8.58 metric tons with the range of 3.50 in Latvia to 22.71 metric tons in Luxembourg.Participating in a global market has consequences for a country's economic evolution, both for the value of the output produced and the resulting consumption. The question here is whether the economic growth and, social and environmental indicators improve over time or whether they decline. Recently, CO2 emissions levels have been growing at varying degrees throughout the EU. Environmental issues are complex in nature and transcend national boundaries. In order to optimize healthy economic growth, policy responses must consider current environmental problems, climate change and CO2 emissions from industries while promoting sustainable growth. The increased economic importance of tourism raises new questions for policy makers regarding the best practice to promote economic growth and reduce CO2 emissions. There has not been a time series approach to analyze the relationship among tourism, CO2 emissions and economic growth for EU countries. This research questions whether tourism induces an increase in the CO2 emissions and economic growth of the region. The questions are vital to disentangle the effect of tourism on both environment and economic growth in the region, where governments often make legislative responses to current environmental issues.

This paper integrates tourism, economic growth, CO2 emissions and FDI in a multivariate format for cointegration tests with the panel data of 27 nations of the EU. The current research discovers and enhances an understanding of a long-run equilibrium relationship among these variables. More importantly, as an exploratory study, the findings indicate tourism directly affects economic growth and inversely alters CO2 emissions in the EU. The applicability of a highly significant effect on both implies that tourism plays a critical role in the continuing economic growth for the region and in achieving emissions reductions through policy and practice changes. There is evidence that when policy makers make strong efforts to attract international tourists through strong marketing campaigns, and showcase the country's presence at many international tourism exhibitions or media, both economy and environment benefit. The relationship between economic growth and CO2 emissions can be different for a developing versus a developed country. Setting different hypotheses for Western and Eastern EU countries to compare results across Western versus Eastern EU economies may be of interest to see if there is a difference. A final suggestion is in order regarding the prospect of global CO2 emissions underlines the need to transform carbon-intensive economies rapidly into green economies. In order to implement such an approach, further empirical analyses are needed to estimate the future associated emissions and the future mitigation potential of growth. This provides an initial guide for ranking sustainable growth actions. Policy makers can then weigh the emissions reduction potential against other sustainability aspects of the action in choosing the appropriate policy to implement.