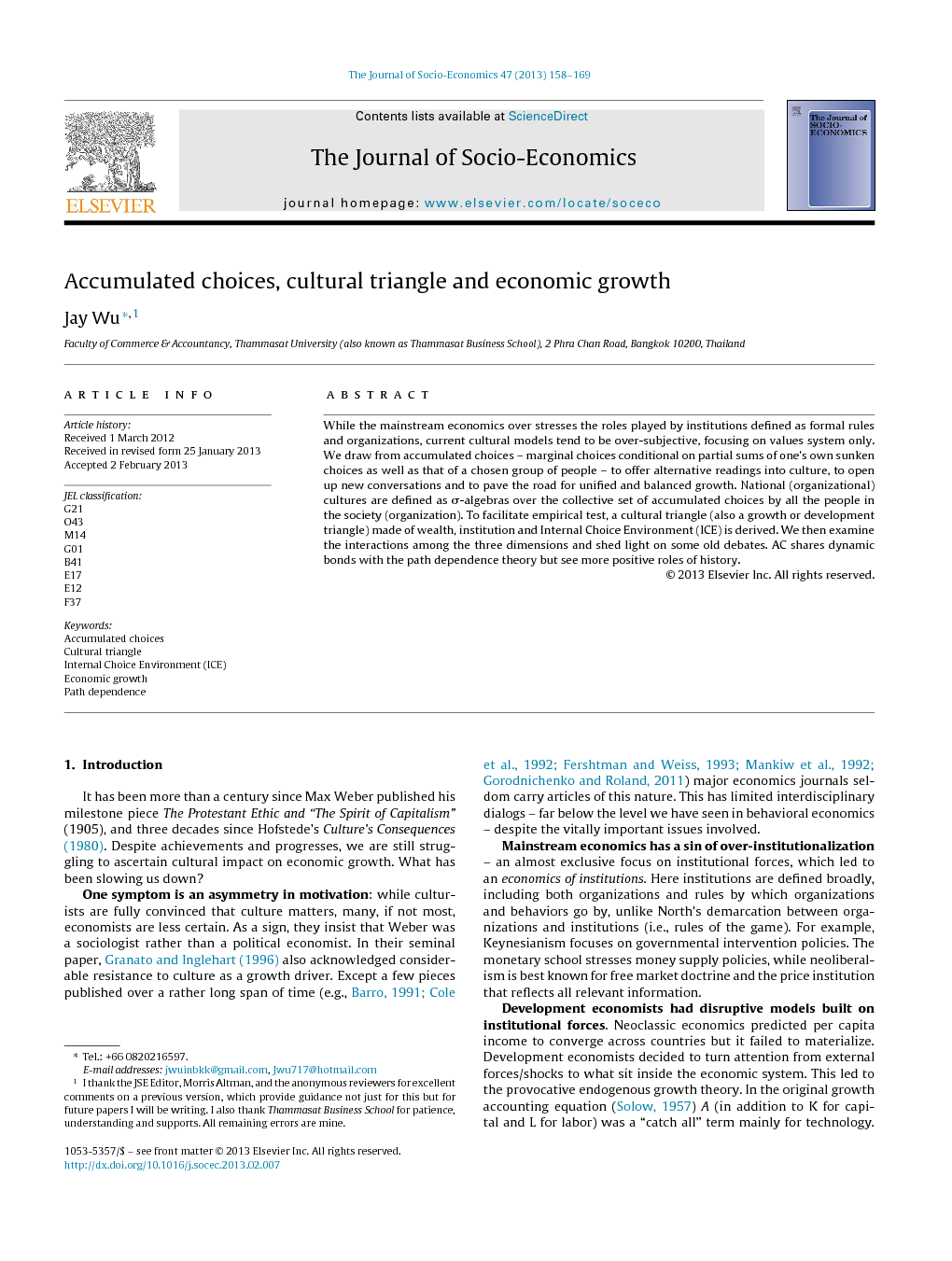 While the mainstream economics over stresses the roles played by institutions defined as formal rules and organizations, current cultural models tend to be over-subjective, focusing on values system only. We draw from accumulated choices – marginal choices conditional on partial sums of one's own sunken choices as well as that of a chosen group of people – to offer alternative readings into culture, to open up new conversations and to pave the road for unified and balanced growth. National (organizational) cultures are defined as σ-algebras over the collective set of accumulated choices by all the people in the society (organization). To facilitate empirical test, a cultural triangle (also a growth or development triangle) made of wealth, institution and Internal Choice Environment (ICE) is derived. We then examine the interactions among the three dimensions and shed light on some old debates. AC shares dynamic bonds with the path dependence theory but see more positive roles of history.

It has been more than a century since Max Weber published his milestone piece The Protestant Ethic and “The Spirit of Capitalism” (1905), and three decades since Hofstede's Culture's Consequences (1980). Despite achievements and progresses, we are still struggling to ascertain cultural impact on economic growth. What has been slowing us down? One symptom is an asymmetry in motivation: while culturists are fully convinced that culture matters, many, if not most, economists are less certain. As a sign, they insist that Weber was a sociologist rather than a political economist. In their seminal paper, Granato and Inglehart (1996) also acknowledged considerable resistance to culture as a growth driver. Except a few pieces published over a rather long span of time (e.g., Barro, 1991, Cole et al., 1992, Fershtman and Weiss, 1993, Mankiw et al., 1992 and Gorodnichenko and Roland, 2011) major economics journals seldom carry articles of this nature. This has limited interdisciplinary dialogs – far below the level we have seen in behavioral economics – despite the vitally important issues involved. Mainstream economics has a sin of over-institutionalization – an almost exclusive focus on institutional forces, which led to an economics of institutions. Here institutions are defined broadly, including both organizations and rules by which organizations and behaviors go by, unlike North's demarcation between organizations and institutions (i.e., rules of the game). For example, Keynesianism focuses on governmental intervention policies. The monetary school stresses money supply policies, while neoliberalism is best known for free market doctrine and the price institution that reflects all relevant information. Development economists had disruptive models built on institutional forces. Neoclassic economics predicted per capita income to converge across countries but it failed to materialize. Development economists decided to turn attention from external forces/shocks to what sit inside the economic system. This led to the provocative endogenous growth theory. In the original growth accounting equation (Solow, 1957) A (in addition to K for capital and L for labor) was a “catch all” term mainly for technology. The endogenous growth models spelt out and tested quite successfully on forces promoting new technology and productivity. The key breakthrough derived from a deviation from the neoclassical assumption of diminishing returns and argued that marginal product of generalized capital is constant, where generalized capital covers both physical and human capitals, the latter includes the result of learning by doing ( Romer, 1986) schooling or “studies” ( Lucas, 1988). Endogenous growth models have kept the tradition by seeking institutional – systematic, tangible and ubiquitous – factors like R&D in the growth formulae. This tradition is still very much alive. For example, Bucci and Segre (2011) used human capital and skill acquisition as the proxy for cultural capital and found the latter indeed helped retain the long run growth rate of real per-capita income. Culturists on the other hand tend to be over-subjective. The most popular definition of cultures – both at organizational and national levels – is values and their dimensions, of which the best known are the four from Hofstede's (1980) – individualism versus collectivism, power distance, uncertainty avoidance and masculinity versus femininity – followed by Schwartz's (1992) layered theory containing both value contents (a total of 57 individual values) and structure (with 10 values types, which were further organized into two higher dimensions). The value centric definition of culture has been widely accepted, including (at least some) economists (e.g., Gorodnichenko and Roland, 2011). Calls for change have arisen from the field. Nævestad (2009), for example, discussed the problem of ignoring organizational (i.e., institutional) factors with research on safety culture, which led to an inappropriate conceptualization of the relationship between culture, technology and structure in high risk organizations. Williamson and Mathers (2011) not just employed cultural measures by the World Values Surveys but also economic institutions associated with economic freedom and found the latter were more important than values for growth. Relying on value along, especially with a single dimension (e.g., individualism and collectivism) could exaggerate cross cultural difference. Tu (2010) for example found significant difference along the IND-COLL dimension among the Asian Four Little Dragons. New value scales have been brought into the field for modeling culture and growth. When it comes to culture in relation to economic development, another two measures – achievement motivation and postmodernist values – have been developed and tested (Granato and Inglehart, 1996) in conjunction to a baseline endogenous growth model. The motivation literature grows out of Weber's original thesis, while the postmodernist value is the inverse of the pro-development spirit in developed countries. The authors created an achievement motivation index by summing up the percentage in each country emphasizing autonomy and economic achievement such as “thrift”, “saving money and things”, and “determination” minus the percentage emphasizing conformity to traditional social norms such as “obedience” and “religious faith”. This strategy paid off: together with per capita GDP and educational investment, their model reached an adjusted R-square of 0.70 and achievement motivate survived through the final model.

We call scholarly attention to accumulated choices that ultimately drive – or stall – cultural changes and economic growth. Values and growth not only have a mutual causality but are in permanently interlocked chains. Growth always comes as a holistic package, and sustainable development always demands, as well as entails, multi dimensional changes. China is perhaps the largest and last example where rapid economic growth fails to bring political reform, but it is an open secret, admitted by leaders in the mainland, that the current Chinese model is not sustainable if not politically, at least environmentally. We expect more changes in the near future there. On the other hand, do not expect an identical trigger of changes for all countries. Rather, each country has own weakest link that most likely turns into next eruption spot. Development research can benefit more from unification than separation. Instead of arguing which comes first or which causes which between values and growth, we should examine history to find out how and what initial changes are more likely to bring follow up events while others are likely contained. A related call is for more interdisciplinary research. We need to bring more scholars on board, not just economists and sociologists. Our cultural triangle serves as a framework or a blueprint for researchers to find their best niches. We now compare AC with the path dependence theory (PDT) and discuss how AC, matched with sigma algebras, offers assistance in modeling cultures.