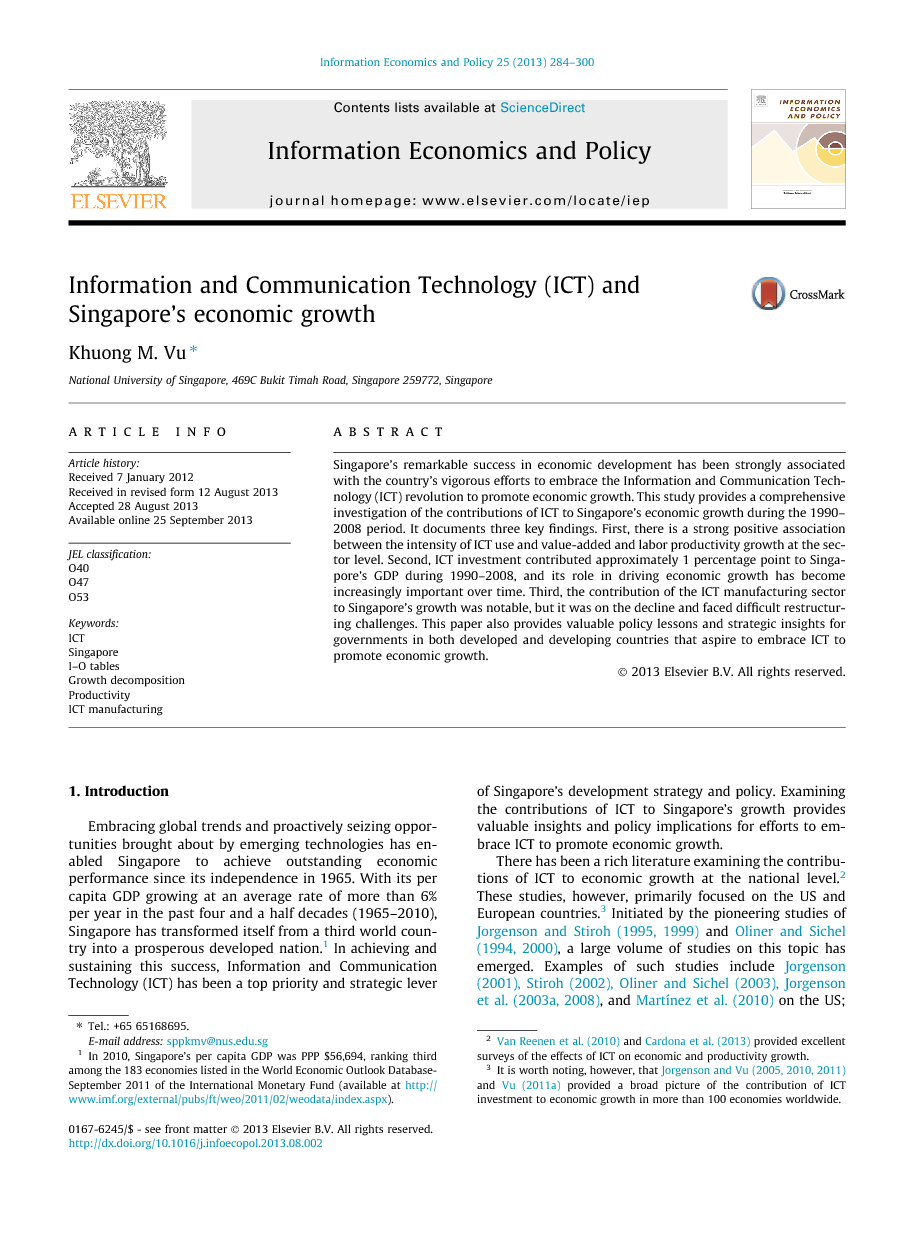 Singapore’s remarkable success in economic development has been strongly associated with the country’s vigorous efforts to embrace the Information and Communication Technology (ICT) revolution to promote economic growth. This study provides a comprehensive investigation of the contributions of ICT to Singapore’s economic growth during the 1990–2008 period. It documents three key findings. First, there is a strong positive association between the intensity of ICT use and value-added and labor productivity growth at the sector level. Second, ICT investment contributed approximately 1 percentage point to Singapore’s GDP during 1990–2008, and its role in driving economic growth has become increasingly important over time. Third, the contribution of the ICT manufacturing sector to Singapore’s growth was notable, but it was on the decline and faced difficult restructuring challenges. This paper also provides valuable policy lessons and strategic insights for governments in both developed and developing countries that aspire to embrace ICT to promote economic growth.

Embracing global trends and proactively seizing opportunities brought about by emerging technologies has enabled Singapore to achieve outstanding economic performance since its independence in 1965. With its per capita GDP growing at an average rate of more than 6% per year in the past four and a half decades (1965–2010), Singapore has transformed itself from a third world country into a prosperous developed nation.1 In achieving and sustaining this success, Information and Communication Technology (ICT) has been a top priority and strategic lever of Singapore’s development strategy and policy. Examining the contributions of ICT to Singapore’s growth provides valuable insights and policy implications for efforts to embrace ICT to promote economic growth. There has been a rich literature examining the contributions of ICT to economic growth at the national level.2 These studies, however, primarily focused on the US and European countries.3 Initiated by the pioneering studies of Jorgenson and Stiroh, 1995 and Jorgenson and Stiroh, 1999 and Oliner and Sichel, 1994 and Oliner and Sichel, 2000, a large volume of studies on this topic has emerged. Examples of such studies include Jorgenson, 2001, Stiroh, 2002, Oliner and Sichel, 2003, Jorgenson et al., 2003a and Jorgenson et al., 2008, and Martínez et al. (2010) on the US; Oulton (2002) and Correa (2006) on the UK; Jorgenson and Motohashi (2005) on Japan; Jalava and Pohjola, 2002 and Jalava and Pohjola, 2007 on Finland; Atzeni and Carboni (2005) on Italy; Martínez et al. (2008) on Spain; Antonopoulos and Sakellaris (2009) on Greece; Colecchia and Schreyer, 2001, Van Ark et al., 2002 and Daveri, 2002, and Timmer et al. (2003) on EU economies; Jorgenson (2003) on the G7 economies; and Dimelis and Papaioannou (2011) on industry-level comparisons between the EU and the US. This paper examines the contributions of ICT to growth in Singapore, where ICT diffusion and production have been promoted with rigorous policy initiatives. Three factors motivate this study. First, Asia is a vibrant region for ICT diffusion and production, but research on the contributions of ICT to growth is scarce. Therefore, there is a need for studies on this topic in countries of the region, especially for those where high-quality data are available, such as Singapore. Second, Singapore has been highly proactive and effective in embracing ICT to foster economic growth. Examining the case of Singapore can provide a comprehensive understanding of the contributions of ICT to growth, which come from ICT use, ICT investment, and ICT production. Third, the fluctuation in the performance of Singapore’s ICT manufacturing sector and its rapid structural change provide valuable policy insights into the challenges faced by the government in its efforts to promote this industry. This paper examines ICT development and growth in Singapore since 1980, with a detailed analysis of the period between 1990 and 2008, for which data on ICT investment and production are available. It is also worth noting that the in-depth analysis of the period 1990–2008 also provides meaningful insights because 1990 marked a milestone in Singapore’s economic growth process. In the period prior to 1990, Singapore’s economic growth was characterized by the government’s export-led efforts to promote quantitative growth through the rapid accumulation of capital. Since 1990, the government has shifted its strategic focus to qualitative development to transform Singapore into a developed nation.4 Furthermore, the period 1990–2008 was also characterized by the accelerating pace of globalization, fueled by the end of the Cold War in 1991, the rise of China and India, and the rapid penetration of the ICT revolution across nations. This paper primarily uses data compiled from Singapore’s Department of Statistics (DOS), of which the data from the I–O tables for 1995, 2000, and 2005 are particularly valuable.5 Additional sources of data include the Ministry of Trade and Industry (MTI), Monetary Authority of Singapore (MAS), World Bank’s World Development Indicators (WDI), and the EU KLEMS Project. The remainder of this paper proceeds as follows. Section 2 introduces Singapore’s strategy and policy initiatives in its effort to embrace the ICT revolution to foster economic growth. Section 3 presents evidence on the associations between ICT use intensity and growth at the sector level. Section 4 estimates the contribution of ICT investment, among other sources, to Singapore’s economic growth. Section 5 examines the contributions of the ICT manufacturing sector. Section 6 summarizes the findings and draws policy lessons.

Singapore has embraced the ICT revolution with tremendous efforts to promote economic growth and has achieved remarkable success. This paper examines the contribution of ICT adoption and production to Singapore’s economic growth over the period between 1990 and 2008. The evidence of the contribution of ICT adoption to growth is solid in both an econometric examination and a growth accounting exercise. Using an econometric examination, this study found that the intensity of ICT use has a significant positive link with value-added and ALP growth at the sector level. The growth accounting exercise revealed that ICT capital played a substantial role in Singapore’s growth, contributing 1.0 percentage point to GDP growth and 0.8 percentage points to ALP growth in 1990–2008. The growth decomposition exercise also revealed that the rate of capital deepening in Singapore’s economy was far more robust for ICT than for non-ICT assets. The share of ICT capital in the contribution of total capital input to growth rose sharply over the three sub-periods of 1990–2008. This indicator for GDP growth was 22% in 1990–1996, 31% in 1996–2002, and 33% in 2002–2008, whereas the figure for ALP growth was 29%, 38%, and 100% for each of the three sub-periods, respectively. Singapore’s ICT manufacturing sector was established in the early stage of Singapore’s development and has been vigorously promoted, especially since 1980. The sector has played an important role in Singapore’s economy, with very large shares in GDP and total exports. Between 1990 and 2008, the sector’s direct contribution was 0.29 percentage points for GDP growth and 0.41 percentage points for ALP growth. The sector’s contribution to Singapore’s growth, however, tended to decline over time in all three measures: Value-added, ALP, and TFP. The declining trend in the sector’s performance and its contributions to the economy is likely caused by external factors: the rapid progress of ICT technology; intensifying global competition, especially from lower-cost countries in the region; and the high volatility of the global demand for ICT hardware. This study offers several important policy insights, especially for developing countries’ efforts to embrace ICT for economic growth. First, ICT use offers solid contributions to growth. A country’s government plays a critical role in fostering ICT adoption. To this end, an effective strategy, well-considered policy initiatives for each stage of ICT development, and the government’s role as a pioneer are critical ingredients for success. Second, ICT production may not always robustly contribute to growth, especially TFP growth. Because of rapid technological change and intensified global competition, the industry faces tremendous pressure to maintain its performance. Given the constraints on its resources, a developing country should assign a much higher priority to fostering ICT adoption than to investing in ICT production. This point is supported by some earlier studies. Wong (2002) observed that some developing East Asian countries may have over-emphasized industrial policy in favor of electronics manufacturing at the expense of promoting ICT diffusion across sectors in the economy. He argued that in such a case, ICT production may divert resources away from ICT diffusion activities rather than being complementary to them. Dedrick and Kraemer (1998) also warned that East Asian countries may become trapped in low-margin electronics manufacturing and fail to develop the ability to move into high-margin, IT-enabled service sectors. Third, an industrial policy that worked well in the past may no longer work well in a new global market landscape, in which the rise of China and, to some extent, India, is transforming the global dynamics of competition and production networks. As a result, policy makers need to rethink and reform their development strategies, especially in their efforts to reap the benefits of the ICT revolution to promote economic growth.