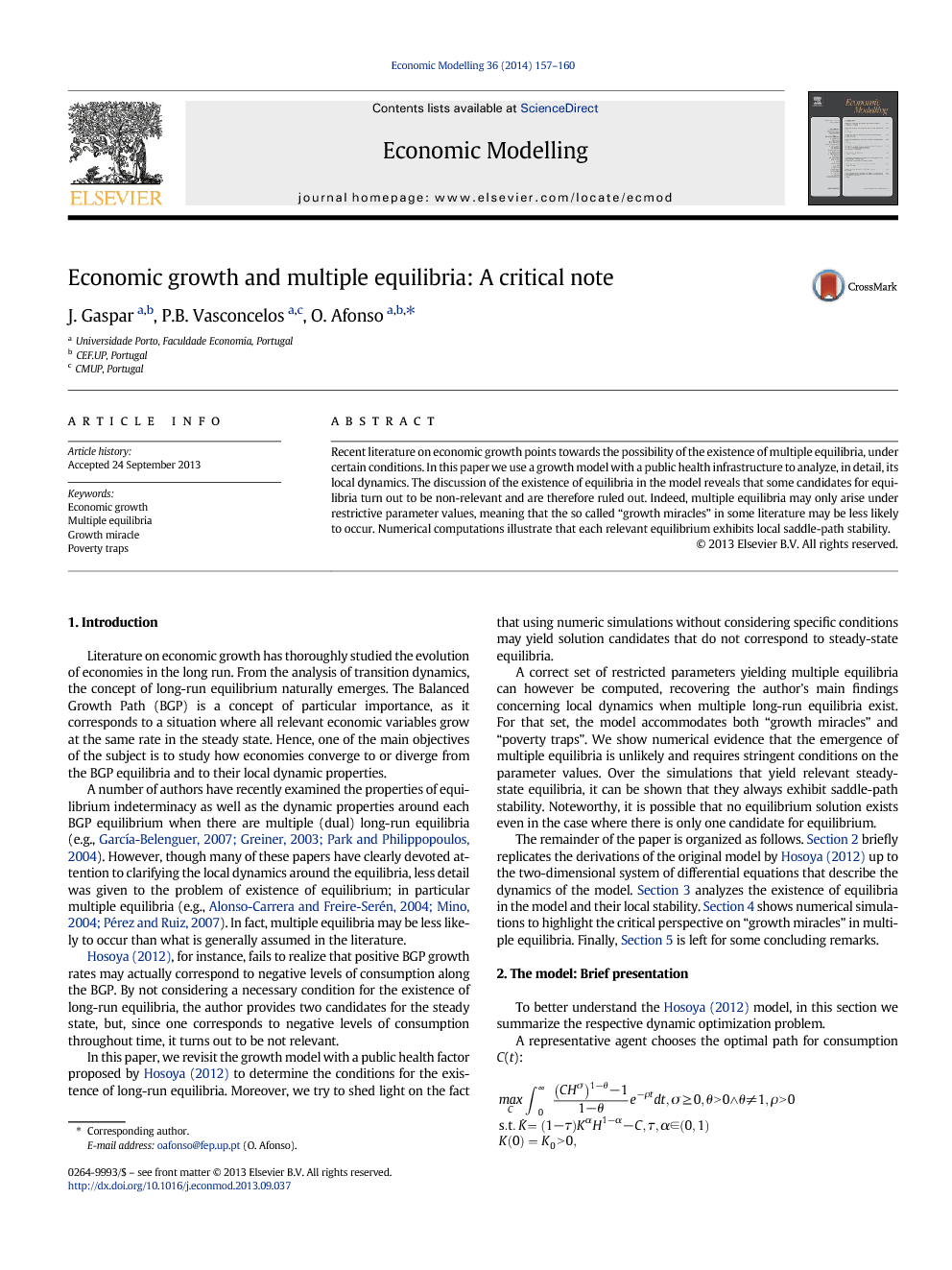 Recent literature on economic growth points towards the possibility of the existence of multiple equilibria, under certain conditions. In this paper we use a growth model with a public health infrastructure to analyze, in detail, its local dynamics. The discussion of the existence of equilibria in the model reveals that some candidates for equilibria turn out to be non-relevant and are therefore ruled out. Indeed, multiple equilibria may only arise under restrictive parameter values, meaning that the so called “growth miracles” in some literature may be less likely to occur. Numerical computations illustrate that each relevant equilibrium exhibits local saddle-path stability.

Literature on economic growth has thoroughly studied the evolution of economies in the long run. From the analysis of transition dynamics, the concept of long-run equilibrium naturally emerges. The Balanced Growth Path (BGP) is a concept of particular importance, as it corresponds to a situation where all relevant economic variables grow at the same rate in the steady state. Hence, one of the main objectives of the subject is to study how economies converge to or diverge from the BGP equilibria and to their local dynamic properties. A number of authors have recently examined the properties of equilibrium indeterminacy as well as the dynamic properties around each BGP equilibrium when there are multiple (dual) long-run equilibria (e.g., García-Belenguer, 2007, Greiner, 2003 and Park and Philippopoulos, 2004). However, though many of these papers have clearly devoted attention to clarifying the local dynamics around the equilibria, less detail was given to the problem of existence of equilibrium; in particular multiple equilibria (e.g., Alonso-Carrera and Freire-Serén, 2004, Mino, 2004 and Pérez and Ruiz, 2007). In fact, multiple equilibria may be less likely to occur than what is generally assumed in the literature. Hosoya (2012), for instance, fails to realize that positive BGP growth rates may actually correspond to negative levels of consumption along the BGP. By not considering a necessary condition for the existence of long-run equilibria, the author provides two candidates for the steady state, but, since one corresponds to negative levels of consumption throughout time, it turns out to be not relevant. In this paper, we revisit the growth model with a public health factor proposed by Hosoya (2012) to determine the conditions for the existence of long-run equilibria. Moreover, we try to shed light on the fact that using numeric simulations without considering specific conditions may yield solution candidates that do not correspond to steady-state equilibria. A correct set of restricted parameters yielding multiple equilibria can however be computed, recovering the author's main findings concerning local dynamics when multiple long-run equilibria exist. For that set, the model accommodates both “growth miracles” and “poverty traps”. We show numerical evidence that the emergence of multiple equilibria is unlikely and requires stringent conditions on the parameter values. Over the simulations that yield relevant steady-state equilibria, it can be shown that they always exhibit saddle-path stability. Noteworthy, it is possible that no equilibrium solution exists even in the case where there is only one candidate for equilibrium. The remainder of the paper is organized as follows. Section 2 briefly replicates the derivations of the original model by Hosoya (2012) up to the two-dimensional system of differential equations that describe the dynamics of the model. Section 3 analyzes the existence of equilibria in the model and their local stability. Section 4 shows numerical simulations to highlight the critical perspective on “growth miracles” in multiple equilibria. Finally, Section 5 is left for some concluding remarks.

This paper analyzes and illustrates the possible occurrence of multiple equilibria in economic growth problems. Using the benchmark growth model by Hosoya (2012) we assert that the existence of equilibria may be more stringent than what is actually considered in economic growth literature. Our first main finding is that, in this model, dual long-run equilibria requires a weight of the public health infrastructure and a discount factor that may be excessively high. Further developments in empirical research are required concerning this matter. Second, we find that no equilibrium solution may exist under somewhat reasonable parameter values. At the very least, it seems that a parametrization required for the existence of multiple equilibria would be more unrealistic than one that would result in no equilibrium. Moreover, we find that the existence of equilibria does not hinge on the level of technological efficiency in public health creation. Finally, in all of our simulations, the relevant BGP equilibria turned out to be saddle-path stable. Thus, when there are multiple equilibria, the economy experiences a relatively undiversified growth pattern when converging on high-growth and low-growth equilibria.