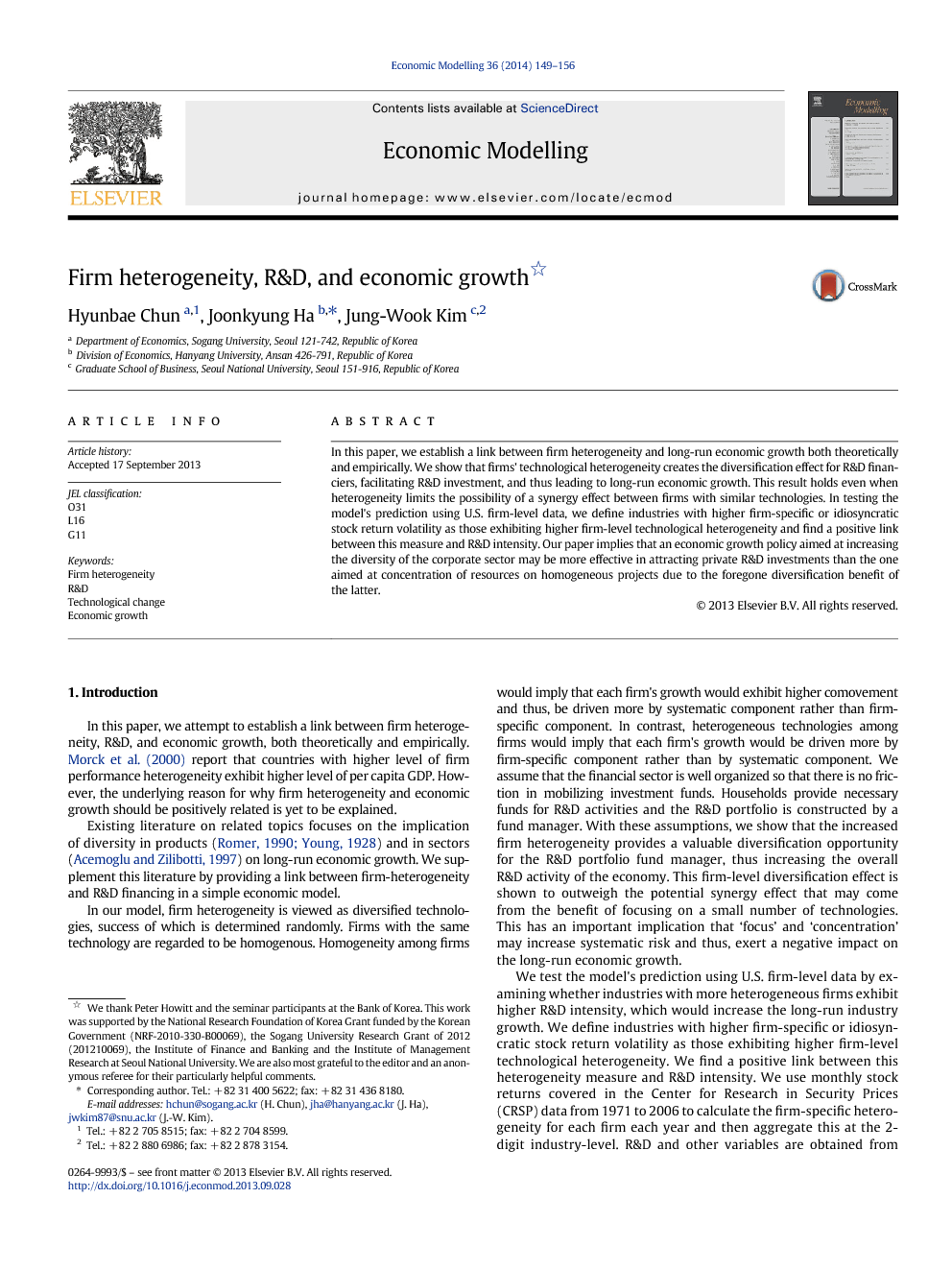 In this paper, we establish a link between firm heterogeneity and long-run economic growth both theoretically and empirically. We show that firms' technological heterogeneity creates the diversification effect for R&D financiers, facilitating R&D investment, and thus leading to long-run economic growth. This result holds even when heterogeneity limits the possibility of a synergy effect between firms with similar technologies. In testing the model's prediction using U.S. firm-level data, we define industries with higher firm-specific or idiosyncratic stock return volatility as those exhibiting higher firm-level technological heterogeneity and find a positive link between this measure and R&D intensity. Our paper implies that an economic growth policy aimed at increasing the diversity of the corporate sector may be more effective in attracting private R&D investments than the one aimed at concentration of resources on homogeneous projects due to the foregone diversification benefit of the latter.

In this paper, we attempt to establish a link between firm heterogeneity, R&D, and economic growth, both theoretically and empirically. Morck et al. (2000) report that countries with higher level of firm performance heterogeneity exhibit higher level of per capita GDP. However, the underlying reason for why firm heterogeneity and economic growth should be positively related is yet to be explained. Existing literature on related topics focuses on the implication of diversity in products (Romer, 1990 and Young, 1928) and in sectors (Acemoglu and Zilibotti, 1997) on long-run economic growth. We supplement this literature by providing a link between firm-heterogeneity and R&D financing in a simple economic model. In our model, firm heterogeneity is viewed as diversified technologies, success of which is determined randomly. Firms with the same technology are regarded to be homogenous. Homogeneity among firms would imply that each firm's growth would exhibit higher comovement and thus, be driven more by systematic component rather than firm-specific component. In contrast, heterogeneous technologies among firms would imply that each firm's growth would be driven more by firm-specific component rather than by systematic component. We assume that the financial sector is well organized so that there is no friction in mobilizing investment funds. Households provide necessary funds for R&D activities and the R&D portfolio is constructed by a fund manager. With these assumptions, we show that the increased firm heterogeneity provides a valuable diversification opportunity for the R&D portfolio fund manager, thus increasing the overall R&D activity of the economy. This firm-level diversification effect is shown to outweigh the potential synergy effect that may come from the benefit of focusing on a small number of technologies. This has an important implication that ‘focus’ and ‘concentration’ may increase systematic risk and thus, exert a negative impact on the long-run economic growth. We test the model's prediction using U.S. firm-level data by examining whether industries with more heterogeneous firms exhibit higher R&D intensity, which would increase the long-run industry growth. We define industries with higher firm-specific or idiosyncratic stock return volatility as those exhibiting higher firm-level technological heterogeneity. We find a positive link between this heterogeneity measure and R&D intensity. We use monthly stock returns covered in the Center for Research in Security Prices (CRSP) data from 1971 to 2006 to calculate the firm-specific heterogeneity for each firm each year and then aggregate this at the 2-digit industry-level. R&D and other variables are obtained from Compustat for the same period. We find that industries with higher firm-specific stock return heterogeneity exhibit higher industry-level R&D intensity. Our model's predictions are related with recent empirical and theoretical literature which examines the relationship between volatility and economic growth. Using cross-country data, Ramey and Ramey (1995) find a negative relationship between the GDP growth volatility and GDP growth. They explain that low aggregate growth volatility provides a stable environment for investment, thus prompting capital accumulation. However, an opposite relationship between volatility and growth is reported from sectoral and firm level analyses. Imbs (2007) finds that sectors with higher growth rate volatilities grow faster in his cross-country study. Chun et al. (2008) analyze U.S. firm-level data and find that industries with higher firm-specific volatilities in stock returns and sales growth grow faster. Both Imbs (2007) and Chun et al. (2008) argue that the high level of sectoral or firm-level growth volatility could be consistent with the low level of aggregate level volatility if sector-specific or firm-specific component in growth, which could be diversified, is larger than systematic component. Acemoglu and Zilibotti (1997), Koren and Tenreyro (2013), and Michelacci and Schivardi (2013) find that economies that could benefit from reduced risk through diversification would grow faster. Our paper supplements these findings by focusing on the role of firm heterogeneity in facilitating R&D funding. Our empirical evidence obtained from firm-level analysis supplements Imbs (2007) who examines the impact of diversification on economic growth using industry-level data. Our finding is different from those studies which examine the implication of the within-firm diversification and R&D activity (Garcia-Vega, 2006, Link and Long, 1981, Peyrefitte and Brice, 2004 and Tanriverdi and Lee, 2008) since our work focuses on the implication of firm heterogeneity in the industry-level R&D funding. This paper is organized as follows; Section 2 presents the model. Section 3 shows the empirical analysis and Section 4 concludes the paper.

In this paper, we develop a model in which firm performance heterogeneity increases the long-run growth rate by providing a diversification opportunity for R&D financiers. The model also shows that the economic significance of the diversification effect outweighs that of the positive spillover effect of clustering among firms in developing the same technology (focus and concentration). We provide the link between theory and empirics using U.S. firm-level data. We define industries with higher firm-specific or idiosyncratic stock return volatility as those exhibiting higher firm-level technological heterogeneity and find a positive link between this heterogeneity measure and R&D intensity, consistent with the model's prediction. The finding of the paper has an important policy implication: strategies aimed at increasing technological diversity are more efficient in attracting private R&D investments, and hence, growth enhancing in the long-run than those aimed at concentrating resources on homogeneous projects. Therefore, when governments make decisions on incentive systems regarding R&D, it may be desirable that they should take into account the relationship between diversification and private R&D financing. Our paper supplements the work of Acemoglu and Zilibotti (1997), who examine the relationship between sectoral diversification and economic growth, by examining a financing channel for R&D activity made possible due to firm performance heterogeneity. Technological diversity is observed not only in developed countries due to firms' heterogeneous adoption of a new technology (Chun et al., 2011), but also in developing countries due to the economic development process itself (Koren and Tenreyro, 2013). Our paper shows that this could further increase the long-run growth potential of an economy through facilitating R&D financing.