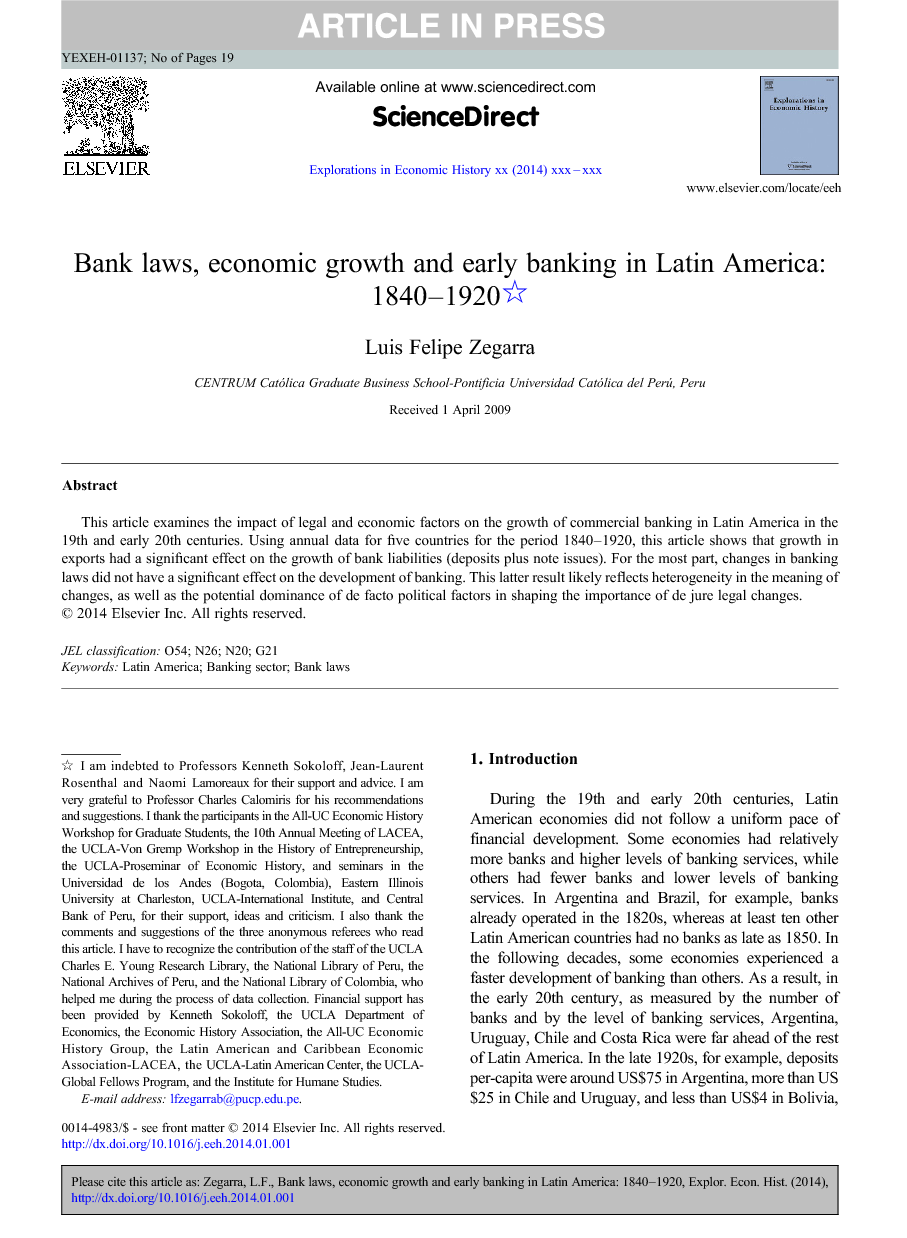 This article examines the impact of legal and economic factors on the growth of commercial banking in Latin America in the 19th and early 20th centuries. Using annual data for five countries for the period 1840–1920, this article shows that growth in exports had a significant effect on the growth of bank liabilities (deposits plus note issues). For the most part, changes in banking laws did not have a significant effect on the development of banking. This latter result likely reflects heterogeneity in the meaning of changes, as well as the potential dominance of de facto political factors in shaping the importance of de jure legal changes.

During the 19th and early 20th centuries, Latin American economies did not follow a uniform pace of financial development. Some economies had relatively more banks and higher levels of banking services, while others had fewer banks and lower levels of banking services. In Argentina and Brazil, for example, banks already operated in the 1820s, whereas at least ten other Latin American countries had no banks as late as 1850. In the following decades, some economies experienced a faster development of banking than others. As a result, in the early 20th century, as measured by the number of banks and by the level of banking services, Argentina, Uruguay, Chile and Costa Rica were far ahead of the rest of Latin America. In the late 1920s, for example, deposits per-capita were around US$75 in Argentina, more than US$25 in Chile and Uruguay, and less than US$4 in Bolivia, Ecuador, Peru, Guatemala and El Salvador.1 This article takes advantage of within-country variation in banking activity over time to investigate which factors are able to account for times of relatively high banking growth. One possible influence on banking growth is economic activity. No matter what the nature of the political or legal constraints on banking, it is likely that improvements in economic activity will produce growth in banking. A greater level of economic activity will increase both the demand for banking services and the amount of banks' profits. It should, therefore, promote banking growth through both the demand and the supply side. With respect to the supply side, increases in the wealth of bankers entrepreneurs should boost bank equity, and therefore, permit expansion of bank assets and debts. Some individual country-studies suggest that the level of economic activity had a significant impact on the development of banking in Latin America. For Mexico, Haber (1991) recognizes the importance of unfavorable economic conditions (small size of the Mexican economy) in partially explaining the slow development of capital markets in Mexico. For Brazil, it seems that economic conditions, in particular the expansion of coffee production, influenced the development of banking. For example, Pelaez (1975) argues that a system of banks of issue developed “when the first impulse of modernization was felt, in the form of expanding coffee trade”,2 whereas Hanley (2005) indicates that in the second half of the 19th century, “the expansion of coffee production stimulated the development of the Sao Paulo capital market by creating a new and large demand for capital to expand plantations and buy or hire workers”.3 Other factors may have mattered, as well. Recent studies have paid much attention to the impact of political limits on banking systems, and also changes in banking laws, for banking development. Some argue that political or legal limits on the establishment of banks or their funding opportunities in some countries were highly restrictive, and that these imposed important barriers to entry. Haber (1991),4 for example, indicates that political factors had a significant role in accounting for the financial backwardness and the stunted process of industrialization in Mexico and Brazil, and that these political factors were, to some extent, reflected in legislative limits. Legal or political constraints in these countries, he argues, dramatically reduced the supply of credit below what it otherwise would have been, and also determined who had access to the scarce supply of credit in the banking system. Limited credit resulted in less industrial production and greater industrial concentration in those countries than would have occurred if their banking systems had permitted free entry. In the case of Mexico, for example, the Mexican ruler Porfirio Diaz (1877–1911) relied on support of a small group of powerful financial capitalists, who pushed for restrictive bank laws.5 For the case of Brazil, Haber (1991) argues that financial markets also were shackled by “public policies designed to restrict entry into banking so as to create a secure source of government finance.”6 Country-case studies for other Latin American economies also support the hypothesis that political or legal barriers to entry had an effect on the development of banking in Latin America.7 In this article, I analyze the effects of changes in the level of commercial activity and changes in banking laws on the growth of bank liabilities in five Latin American countries during the period 1840–1920. This article is the first comparative study of the causes of banking growth in Latin America that includes more than two countries in the sample. In particular, the sample includes the following five countries: Mexico, Argentina, Brazil, Chile, and Peru. Until now the literature has been largely focused on the analysis of individual country-cases, or to the comparative analysis of the largest countries in the region. Second, the article relies on an original database which includes the level of bank output and bank laws. I have used a wide variety of primary and secondary sources to calculate bank output. Bank laws have also been collected from primary and secondary sources. I find that the growth of bank liabilities was substantially influenced by the level of export activity. In particular, I find that growth in exports per-capita had a large and highly significant effect on the size of the banking sector. I find that, for the most part, changes in banking laws did not influence banking growth. That finding likely reflects a variety of influences including: the short durations of many of these legal liberalizations (i.e., some lasted for very brief periods), and the dominance of political factors, which may have rendered legal liberalization of little practical importance for bank entry. The organization of the article is as follows. Section 1 provides a brief description of bank laws in Latin America during this period. In Section 2, I describe the evolution of banking and its possible relationship with the level of economic activity. In Section 3, I conduct a panel data analysis, using annual data for five Latin American countries in the period 1840–1920. Section 4 concludes the article. The Appendix A describes the dataset and the sources I used to construct the dataset.

This article examines the impact of export activity and banking legislation on the growth of banking in five Latin American countries in the 19th and early 20th centuries. The evidence indicates that increased export activity had an important effect on banking growth. The explanation for the importance of export activity is straightforward: an increase in economic activity increased the demand for and supply of financial services. There was a wide variety of banking laws in Latin America. Mexico had a very restrictive legislation: in the late 19th century, it had a charter system on entry and on note issue, as well as high capital requirements, state monopoly rights and branch restrictions. However, this country is not representative of all the banking legislations in the region. Peru and Chile, for example, adopted liberal free-banking regimes on bank entry and on note issue for a long period in the 19th century. The panel data analysis shows that in most countries banking laws did not have a significant effect on the provision of banking services, which may reflect the short duration of liberalizations or political limits that rendered them ineffectual. There is one exception: changes in restrictions on note issue were particularly important in explaining differences in the growth of banking liabilities in Argentina.