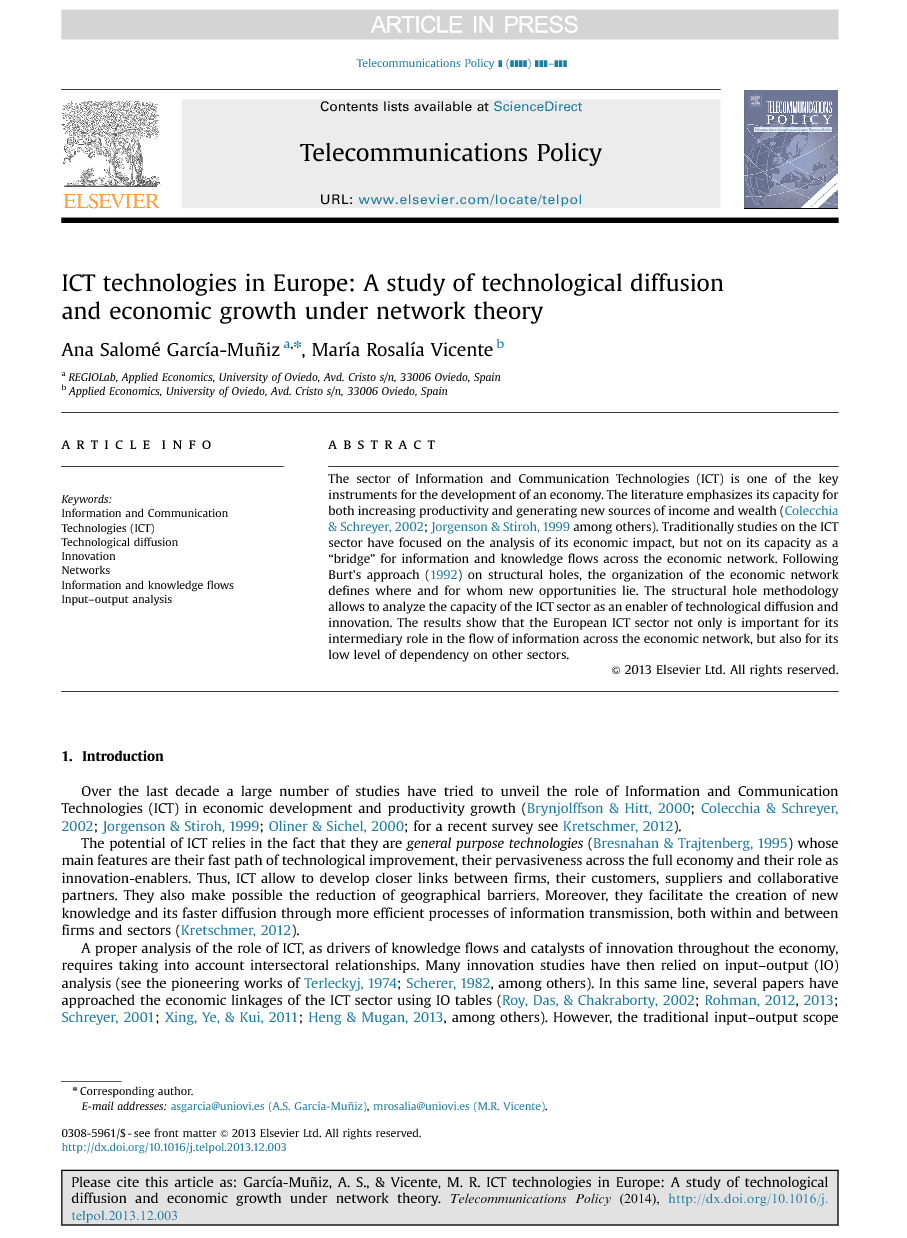 The sector of Information and Communication Technologies (ICT) is one of the key instruments for the development of an economy. The literature emphasizes its capacity for both increasing productivity and generating new sources of income and wealth (Colecchia and Schreyer, 2002 and Jorgenson and Stiroh, 1999 among others). Traditionally studies on the ICT sector have focused on the analysis of its economic impact, but not on its capacity as a “bridge” for information and knowledge flows across the economic network. Following Burt's approach (1992) on structural holes, the organization of the economic network defines where and for whom new opportunities lie. The structural hole methodology allows to analyze the capacity of the ICT sector as an enabler of technological diffusion and innovation. The results show that the European ICT sector not only is important for its intermediary role in the flow of information across the economic network, but also for its low level of dependency on other sectors.

Over the last decade a large number of studies have tried to unveil the role of Information and Communication Technologies (ICT) in economic development and productivity growth (Brynjolfsson and Hitt, 2000, Colecchia and Schreyer, 2002, Jorgenson and Stiroh, 1999 and Oliner and Sichel, 2000; for a recent survey see Kretschmer, 2012). The potential of ICT relies in the fact that they are general purpose technologies ( Bresnahan & Trajtenberg, 1995) whose main features are their fast path of technological improvement, their pervasiveness across the full economy and their role as innovation-enablers. Thus, ICT allow to develop closer links between firms, their customers, suppliers and collaborative partners. They also make possible the reduction of geographical barriers. Moreover, they facilitate the creation of new knowledge and its faster diffusion through more efficient processes of information transmission, both within and between firms and sectors ( Kretschmer, 2012). A proper analysis of the role of ICT, as drivers of knowledge flows and catalysts of innovation throughout the economy, requires taking into account intersectoral relationships. Many innovation studies have then relied on input–output (IO) analysis (see the pioneering works of Terleckyj, 1974 and Scherer, 1982, among others). In this same line, several papers have approached the economic linkages of the ICT sector using IO tables (Roy et al., 2002, Rohman, 2012, Rohman, 2013, Schreyer, 2001 and Xing et al., 2011; Heng & Mugan, 2013, among others). However, the traditional input–output scope does not take into account the qualitative importance of the industrial linkages structure which is essential in the technological diffusion. In this paper, such an approach is combined with network theory and Burt's concept on structural holes (Burt, 1992). The starting basis of this paper is the identification of the flows of goods among the sectors of the economy as the linkages of the productive network. By analyzing the (relative) position of a sector in this network and, hence, the relationships it establishes with other industries, it is possible to approach its capacity for innovation generation and diffusion. As Lundvall (1992) and Edquist (1997) pointed out, innovation is by no means an isolated process but, on the contrary, it emanates from the interaction and learning that takes place between innovative organizations. Nonetheless, there are some considerations to take into account when identifying the intersectoral flows of goods with the links of the economic network and its meaning in terms of innovation diffusion. In the first place, while the flows of goods between two sectors might be small in size, they might be relevant for innovation diffusion and knowledge transmission. In the second place, the use of some goods might be widely spread across the economy, but this might have few or no implications on the quality and effectiveness of innovation diffusion (García et al., 2010, Papaconstantinou et al., 1998, Semitiel-García and Noguera-Méndez, 2012 and Soofi and Ghazinoory, 2011). Given this, the approach used in this paper takes into account not only the size and number of flows of goods between sectors but also the type of linkage in terms of information provision. According to Burt (1992) the relationships of an individual (enterprise) do not provide him with the same information and opportunities, and hence, do not have the same relevance for knowledge transmission and innovation diffusion. In particular, Burt distinguishes between redundant and non redundant connections, the latter being defined as those links that provide access to varied information and therefore allow to gain a competitive advantage. Non redundant contacts are connected by, what Burt calls, structural holes: “there is a structural hole between two people (firms) who (which) provide non redundant network benefits” (Burt, 1992, p. 19).1 Hence, what matters for any individual (firm) is to have a network rich “in structural holes, and so entrepreneurial opportunity, and so information and control benefits” (Burt, 1992, p. 48). Within this context, the aim of this paper is to analyze the extent to which the ICT sector acts as a bridge that facilitates the spread of relevant information and knowledge flows through the productive sectors of the economic network. In order to assess the relevance of information flows between sectors, Burt's approach on structural holes ( Burt, 1992) is applied in the framework of input–output analysis and network theory. Empirical evidence is drawn from data on IO tables for the European Union (EU) over the period 2000–2007. The performance of the ICT sector in the EU is extensively described in the latest Predict report by the Institute for Prospective Technological Studies (2012b). The most recent figures available indicate that the EU ICT sector accounted for 4% of EU Gross Domestic Product (GDP) and 2.7% of total EU employment in 2009. The generation of value added concentrated in ICT services, with more than 90% of the sector's value added produced by ICT services and, in particular, by Telecommunications and computer programming, consultancy and related activities. The ICT sector is highly intensive in research and development (R&D) compared to the rest of the European economy: R&D intensity in the ICT sector, measured by the ratio of R&D expenditures in value added, was more than four times the European average in 2009 (5.3% versus 1.2%). Regarding the performance of the EU ICT sector during the crisis, the report highlights the resilience of ICT services: between 2008 and 2009, ICT manufacturing value added decreased by 30% compared to a 4% decrease in ICT services. The report also reveals an increasing gap between the United States (US) and the EU in ICT performance: not only does the US ICT sector lead on all figures (value added, R&D investment, and labor productivity) but also it manages to keep on growing in spite of the crisis. The paper is organized as follows. Section 2 presents the methodological approach providing some basic ideas on input–output analysis, followed by the description of Burt's concept of structural holes (1992) and the necessary analytical tools. Section 3 describes the data used in this paper together with the definition of the ICT sector. Section 4 presents some results about the strengths and weaknesses of the European ICT sector, followed by some concluding remarks.

This paper has presented a novel perspective on the analysis of the ICT sector. Using the information provided by input–output tables for the European Union and on the basis on network theory, the paper identifies the intersectoral flows of goods as the links of the productive network and explores the importance of such connections for gaining competitive advantages, accessing information and diffusing innovations through Burt's concept on structural holes. Results have shown that the EU ICT sector has a high level of efficiency with low dependences. The presence of structural holes in the network of contacts established by the ICT sector implies that it accesses to diverse information. In contrast, non ICT sectors tend to generate more homogenous information through their linkages and with larger dependences on other industries. Therefore, the ICT sector is a key economic activity that can access to new potentially valuable resources and has advantages in the exclusivity of information. The ICT sector has then the capacity to foster technological diffusion and the generation of innovation in the European Union. Regarding constraints, the low results obtained for the ICT sector have two main implications. On the one hand, they indicate that negative shocks in the economy have a limited impact over this sector compared to the rest of industries. In fact, previous studies by the OECD (2009), the European Commission (2012b) and the Institute for Prospective Technological Studies (2012b)7 have underlined the resilience of the European Union ICT sector during the crisis. On the other hand, they imply that the efforts needed in this sector to establish new links are lower than in the rest of the industries, and thus, the ICT sector can play a fundamental role as a catalyst of innovation throughout the economy. Nonetheless, results draw attention over a serious weakness of the EU ICT sector: the lowest efficiency levels are shown by those ICT activities where most new value creation is taking place. Hence, results underline that European firms operating in Computer and related services are not fully exploiting the advantages offered by their network of contacts. This constitutes a major drawback that constraints European ability to capitalize on the innovation and growth-enhancing effects of these activities throughout the economy All this points to one same direction for European policy action: the need to strengthen the EU ICT sector and specially those activities (Internet and software) with the higher potential for new value generation. Indeed, the European Commission (2012b, p. 3) recently recognized that while “ICT is the essential transformative technology that supports structural change in sectors like health, care, public services and education”, the EU has not been “positioning itself well enough to benefit from these digital developments”. Therefore, the review of the European Digital Agenda, carried out last December 2012, has tried to address such issue by refocusing on seven priority areas: (i) advance in the creation of a single digital market; (ii) orientate public procurement more towards nurturing early-stage ICT innovations; (iii) foster investment in high-speed networks; (iv) reinforce Internet security; (v) speed up the establishment of a favorable framework towards the development of the market for cloud computing services; (vi) improve the digital and entrepreneurial skills of the Europeans and create a more business-friendly environment for ICT start-ups; and (vii) boost research and development efforts in ICT as key enabling technologies for innovation and growth across the economy (European Commission, 2012b). In relation with this last point, the new framework programme, Horizon 2020, is putting especial attention on successfully bringing ideas to market commercialization and so remove one of the main obstacles of innovation in Europe (European Commission, 2012a). Furthermore, it is a key aspect that European firms, following US' example, establish collaboration links in ICT R&D with Asia since the latter has become a center of ICT innovation (Institute for Prospective Technological Studies (IPTS), 2011, Rohman, 2012 and Rohman, 2013). As the Institute for Prospective Technological Studies (2012c, p. 16) states, “in the current wave of the digital shift, there is a need to support the network of cooperation between the different players”. Overall, and as Veugelers (2012, p. 13) points out, any European action aimed at the strength of the ICT sector “should not be seen isolation, but part of a policy mix. This is important because the problems Europe has in building innovation capacity in new ICT markets are systemic”. Only in this way, it will be possible to capitalize on ICT benefits throughout the economy (Veugelers et al., 2012). Finally, some limitations must be considered in the analysis. In particular, it is important to bear in mind that the approach on structural holes using input–output tables only takes into account the economic transactions taking place between sectors. Therefore, there are some elements that have not been captured in the analysis, despite its importance for innovation diffusion across the economic network. These are the cases of strategic alliances between firms and between firms and universities, the existence of technological clusters or poles of excellence in ICT (Institute for Prospective Technological Studies, 2012a), and the maturity of the sectors, among others. Future research in this area should then focus on trying to incorporate such elements in order to get further insights into the analysis of ICT-enabled innovation.