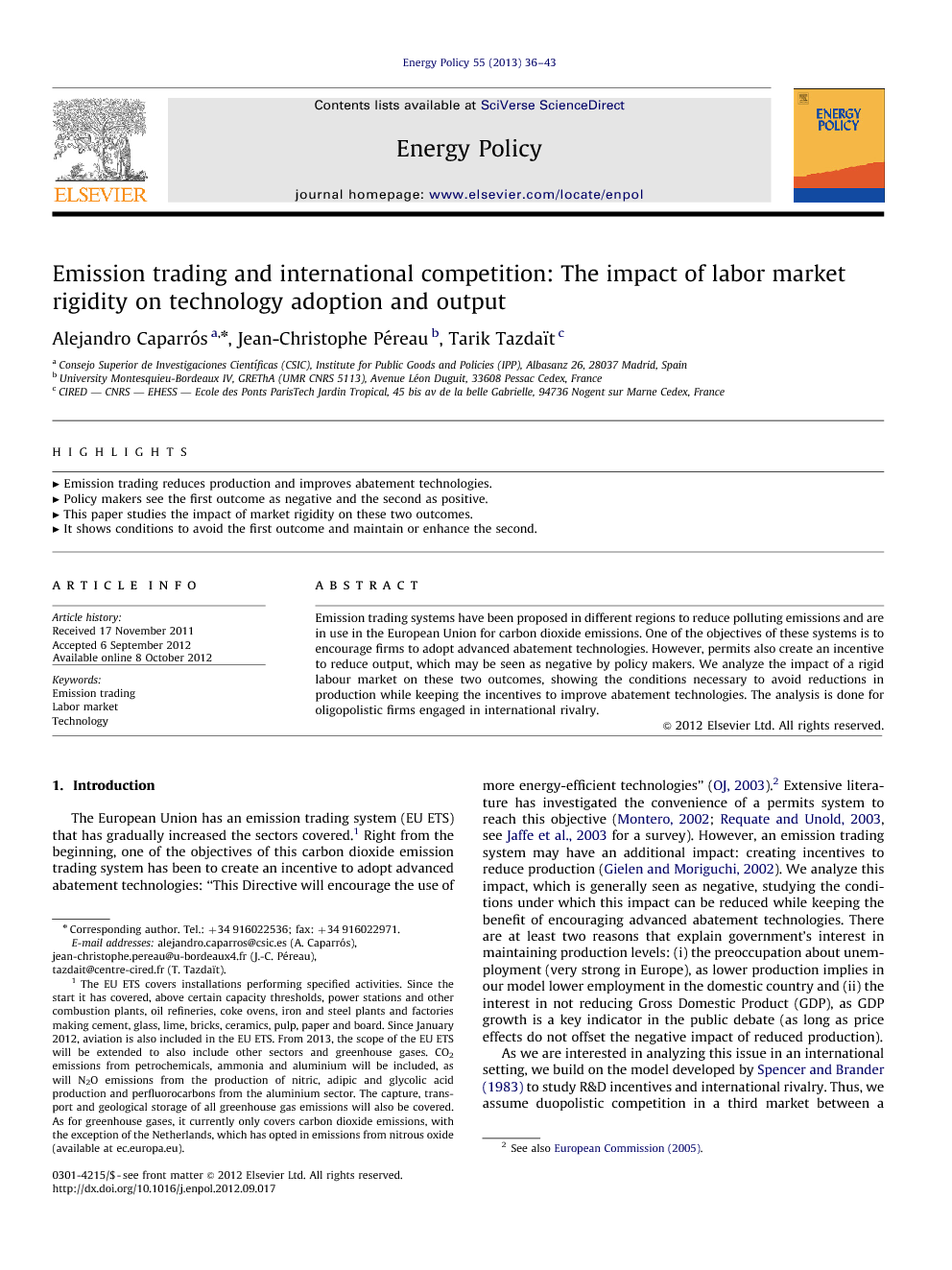 Emission trading systems have been proposed in different regions to reduce polluting emissions and are in use in the European Union for carbon dioxide emissions. One of the objectives of these systems is to encourage firms to adopt advanced abatement technologies. However, permits also create an incentive to reduce output, which may be seen as negative by policy makers. We analyze the impact of a rigid labour market on these two outcomes, showing the conditions necessary to avoid reductions in production while keeping the incentives to improve abatement technologies. The analysis is done for oligopolistic firms engaged in international rivalry.

The European Union has an emission trading system (EU ETS) that has gradually increased the sectors covered.1 Right from the beginning, one of the objectives of this carbon dioxide emission trading system has been to create an incentive to adopt advanced abatement technologies: “This Directive will encourage the use of more energy-efficient technologies” (OJ, 2003).2 Extensive literature has investigated the convenience of a permits system to reach this objective (Montero, 2002 and Requate and Unold, 2003, see Jaffe et al., 2003 for a survey). However, an emission trading system may have an additional impact: creating incentives to reduce production (Gielen and Moriguchi, 2002). We analyze this impact, which is generally seen as negative, studying the conditions under which this impact can be reduced while keeping the benefit of encouraging advanced abatement technologies. There are at least two reasons that explain government's interest in maintaining production levels: (i) the preoccupation about unemployment (very strong in Europe), as lower production implies in our model lower employment in the domestic country and (ii) the interest in not reducing Gross Domestic Product (GDP), as GDP growth is a key indicator in the public debate (as long as price effects do not offset the negative impact of reduced production). As we are interested in analyzing this issue in an international setting, we build on the model developed by Spencer and Brander (1983) to study R&D incentives and international rivalry. Thus, we assume duopolistic competition in a third market between a domestic and a foreign firm.3 The assumption of imperfect competition is well suited for most of the sectors affected by the EU ETS (Antweiler and Trefler, 2002). We further assume that the domestic country or region (e.g. the European Union) establishes an emission trading system, while the foreign country (e.g. the United States) does not.4 This implies that the firm producing in the domestic country has to pay the permit price β>0β>0 when its emissions exceed a limit E of permits grandfathered (we assume throughout the paper that the ETS has a binding cap and that the equilibrium permit price is strictly positive). Conversely, when the emissions of the firm producing in the domestic country are lower than this limit E, the firm can sell permits at the price ββ. As the EU ETS is mainly focused on energy intensive sectors, we assume that the inputs in the firm's production function are energy, technology (capital) and labor. We also analyze the impact of a second big difference between the conditions under which an American (foreign country) and at least some European (domestic country) firms produce: the rigidity of their labor markets. On average, European countries have much stronger employment protection regulations than the US, although there are marked differences between countries within Europe (Southern European countries have the strongest provisions, followed by the Central European countries, the Nordic countries and finally Ireland and the UK, which are the least restrictive in Europe; see OECD, 1999). Bartelsman et al. (2004) provide evidence from firm-level data that these cross-country differences in employment protection influence firms' behavior (they show that young expanding European firms grow more slowly than their US counterparts). In contrast, in a theoretical analysis, Kessing (2006) found that firms facing employment protection will defend their market position more fiercely, resulting in a larger average market position. We do not study possible revenue-recycling effects or the impact of distortionary taxes, as has been done in most of the literature that has linked environmental policy (mainly taxes) and labor markets (Bovenberg and Goulder, 1996 and Parry et al., 1999). On the contrary, we link environmental policy and labor policy and analyze the impacts on output and technology adoption decisions of the former (we focus on energy saving technologies, for an analysis of the relationship between labor-saving technology and labor market rigidity see Lommerund and Straume, 2012). There is a vast literature that studies strategic international environmental policy in an international competition framework (Conrad, 1993, Barrett, 1994, Rauscher, 1994 and Ulph, 1996, amongst others). These models show that environmental policy, in the form of taxes, emission standards or R&D subsidies, can favor domestic firms and be therefore used by governments strategically. Our approach extends these analyses by taking into account the impact of labor market rigidity, although we do not analyze the strategic behavior of the government but exclusively the optimal reaction of the firms to a situation where both, environmental and labor policy is considered. The analysis entails a sequential decision. In a first stage firms choose technology, while production and sales occur in a second stage. As this implies a two-stage game with complete information, the equilibrium concept to be used is the Subgame Perfect Equilibrium (SPE) proposed by Selten, 1965 and Selten, 1975, and we solve the game by backward induction. Instead of adding a third stage to analyze the strategic behavior of the government as in the papers mentioned in the previous paragraph, we simply suppose that the government is not interested in emission reductions obtained through reductions in output (due to undesired impacts on employment and growth), while it is interested in emission reductions induced by technological changes. Since we show below the conditions under which setting up an emission trading system (or increasing the equilibrium permit price, for example by tightening the cap) implies output reductions, we analyze the impact of labor market rigidity on this outcome showing conditions under which production reductions are avoided while abatement technologies are enhanced. Given the international rivalry context analyzed, we focus on relative levels of technology. The paper is organized as follows. Section 2 describes the basic model. Section 3 studies optimal production decisions (the second stage of the game). Section 4 analyzes optimal technology decisions (the first stage of the game). Section 5 concludes.

An emission trading system lowers emissions by reducing production and by improving abatement technologies. Most policy makers would see the first outcome as negative and the second as positive. Focusing on oligopolistic firms engaged in international rivalry, this paper has studied the impact of market rigidity on these two outcomes, showing conditions that would avoid the first outcome while maintaining or even enhancing the second. Given that an emission trading system reduces production while labor market rigidity tends to increases it, we have shown that it is possible to find conditions for which these two effects cancel out. We have also shown that emission trading generally favors the adoption of advanced technologies, although not always, and that labor market rigidity does not change this conclusion (in fact, it may even favor higher relative levels of technology if certain conditions are met). Finally, combining these two results, we have shown that increasing labor market rigidity it is possible to maintain output and to favor advanced technology adoption. These results have several policy implications. Taking the results literally, one could argue in favor of increasing labor market rigidity whenever an emission trading system is introduced. However, an important caveat needs to be recognized before supporting this conclusion. We have used a partial model and we have not analyzed the welfare implications of the environmental and the social constraints. In fact, such an analysis would probably show that market rigidity has welfare costs. A more conservative interpretation of our results would be that market rigidity, which happens to exist in many European countries despite its welfare costs, has probably favored a situation where emission trading induces emission reductions through enhanced abatement technologies rather than through output reductions. As a direct consequence, the evaluation of any policy that increases labor market flexibility needs to take into account the implications for the existing emission trading systems. In fact, as increasing labor market flexibility is in the agenda of most European countries, an interesting avenue for future research would be to analyze the relationship between emission trading and alternative labor market reforms (Lommerund and Straume, 2012 show that increasing “flexicurity”, interpreted as less employment protection and higher reservation wages for workers, increases firms incentives to adopt labor-saving technology; see Blanchard and Tirole, 2008 for a discussion of alternative labor market reforms). Finally, our results show that one needs to take care when extrapolating the results of the European emissions trading scheme (EU ETS) to the United States since, as stated above, most European countries have a much more rigid labor market. As there is an ongoing debate in the United States about potential emission trading systems, several researchers have analyzed the European case to learn from their experience (see Arroyo, 2011 for an overview of this debate, which has recently cooled down considerably, and Ellerman et al., 2007 or Ellerman, 2008 for analysis that see the EU ETS as a prototype for future systems). However, our results suggest that empirical analysis on the impact of the EU ETS on technology adoption is probably not a good approximation of the behavior that American firms would have if confronted with a similar system, simply because labor markets are completely different and the choice between reducing output or enhancing technology is influenced by the constraints in this market (in a review of the impact of the more sectorial emission trading experiences in the United States, Gagelmann and Frondel, 2005 show that innovation effects were limited).