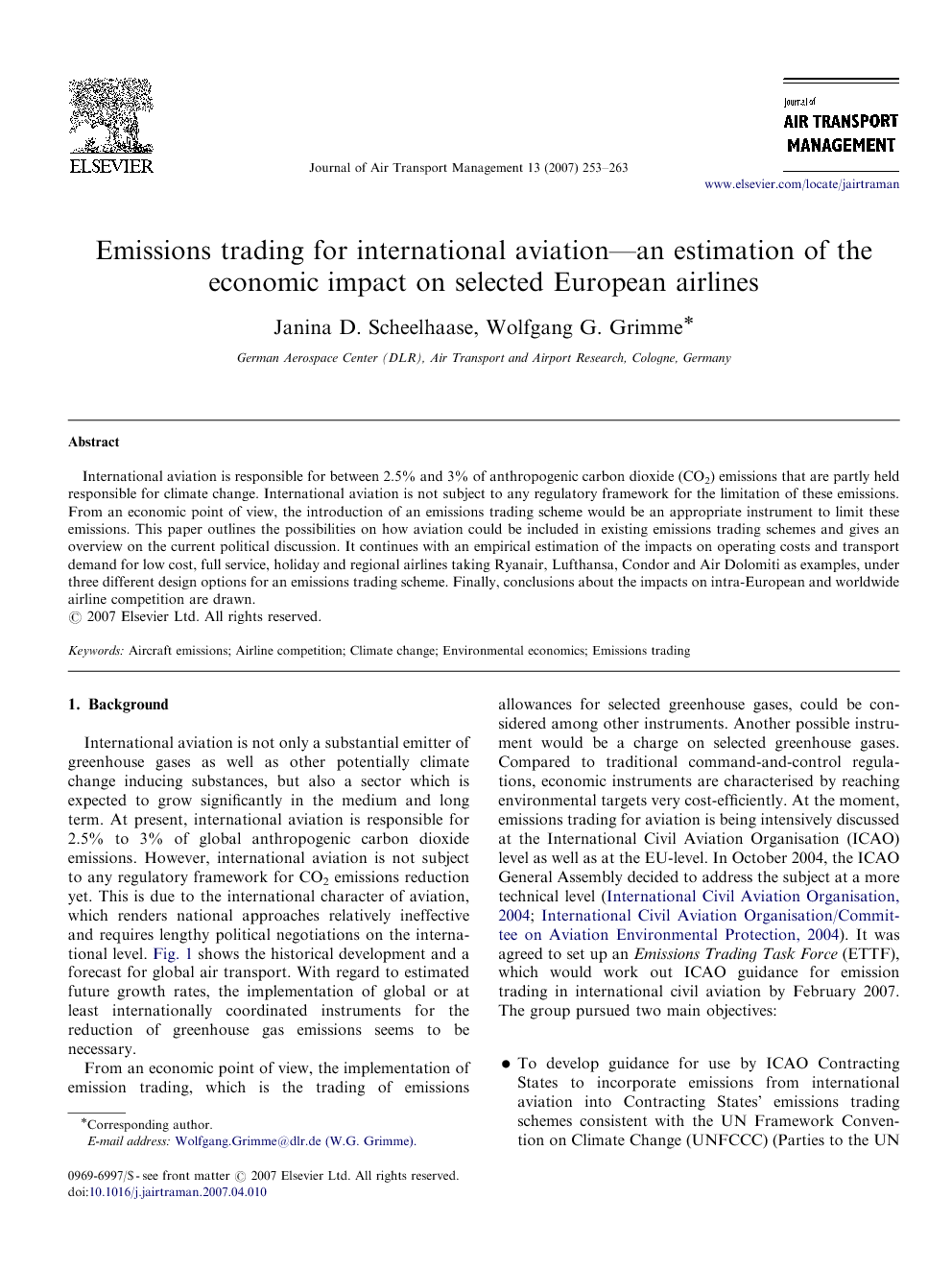 International aviation is responsible for between 2.5% and 3% of anthropogenic carbon dioxide (CO2) emissions that are partly held responsible for climate change. International aviation is not subject to any regulatory framework for the limitation of these emissions. From an economic point of view, the introduction of an emissions trading scheme would be an appropriate instrument to limit these emissions. This paper outlines the possibilities on how aviation could be included in existing emissions trading schemes and gives an overview on the current political discussion. It continues with an empirical estimation of the impacts on operating costs and transport demand for low cost, full service, holiday and regional airlines taking Ryanair, Lufthansa, Condor and Air Dolomiti as examples, under three different design options for an emissions trading scheme. Finally, conclusions about the impacts on intra-European and worldwide airline competition are drawn.

International aviation is not only a substantial emitter of greenhouse gases as well as other potentially climate change inducing substances, but also a sector which is expected to grow significantly in the medium and long term. At present, international aviation is responsible for 2.5% to 3% of global anthropogenic carbon dioxide emissions. However, international aviation is not subject to any regulatory framework for CO2 emissions reduction yet. This is due to the international character of aviation, which renders national approaches relatively ineffective and requires lengthy political negotiations on the international level. Fig. 1 shows the historical development and a forecast for global air transport. With regard to estimated future growth rates, the implementation of global or at least internationally coordinated instruments for the reduction of greenhouse gas emissions seems to be necessary.From an economic point of view, the implementation of emission trading, which is the trading of emissions allowances for selected greenhouse gases, could be considered among other instruments. Another possible instrument would be a charge on selected greenhouse gases. Compared to traditional command-and-control regulations, economic instruments are characterised by reaching environmental targets very cost-efficiently. At the moment, emissions trading for aviation is being intensively discussed at the International Civil Aviation Organisation (ICAO) level as well as at the EU-level. In October 2004, the ICAO General Assembly decided to address the subject at a more technical level (International Civil Aviation Organisation, 2004; International Civil Aviation Organisation/Committee on Aviation Environmental Protection, 2004). It was agreed to set up an Emissions Trading Task Force (ETTF), which would work out ICAO guidance for emission trading in international civil aviation by February 2007. The group pursued two main objectives: • To develop guidance for use by ICAO Contracting States to incorporate emissions from international aviation into Contracting States’ emissions trading schemes consistent with the UN Framework Convention on Climate Change (UNFCCC) (Parties to the UN Framework Convention on Climate Change) process and • To support the development of a voluntary trading system that interested Contracting States and international organisations might propose. Both objectives were realised by the CAEP/7 meeting held in February 2007. In addition to this, ICAO assigned ICF Consulting to conduct a study to analyse possibilities for design options and implementation of emission trading schemes for international aviation (ICF Consulting, 2004). On the European Union (EU) level, an intensive discussion concerning a possible emissions trading scheme for aviation is taking place. In September 2005, the European Commission announced that the best way forward, from an economic and environmental point of view, is to include the climate impact of the aviation sector in the EU emissions trading scheme (EU-ETS) (Commission of the European Communities, 2005). In December 2006, the European Commission published a proposal for a Directive on the inclusion of aviation activities into the EU-ETS (Commission of the European Communities, 2006). Under the proposal, aircraft operators—airlines, operators of work traffic, and private aircraft owners—would be obliged to hold allowances for the carbon dioxide emissions of their aircraft. For competition reasons, all flights departing from and arriving at airports in the EU would be incorporated into the trading scheme. Airlines from outside of the EU would be required to surrender allowances, if they depart from or arrive at an airport in the EU. This approach is remarkable because a number of countries, for instance the US and many developing countries did not commit themselves to emission reductions under the Kyoto Protocol. The European Commission justifies its proposal on the grounds that significant competitive distortions would occur if only EU airlines were included. It remains to be seen, if this approach is enforceable under international law. The Chicago Convention on Civil Aviation principles that all laws and provisions of a country must be applied on all aircraft regardless of their nationality is an indication for the possible legality of the approach. The European Commission plans to include only carbon dioxide emissions in the EU-ETS; for NOx alternative measures are planned. It is foreseen that flights by aircraft with a MTOW (maximum take-off weight) of less than 5700 kg will be excluded from the scheme. The total amount of “aviation allowances” to be allocated to the aviation sector will be determined at EU level through reference to average emissions from aviation in the period 2004–2006. “Aviation allowances” are allowances to emit 1 ton of carbon dioxide equivalent during a specified period and are valid only for meeting the requirement of aircraft operators to surrender allowances and are transferable in accordance with the provisions of the Directive. The Commission plans to integrate aviation into the EU-ETS from 2011. This paper provides an overview on the options for initially including international civil aviation in existing emission trading schemes. The economic impacts of the integration of the air transport sector into the EU-ETS on individual airlines are estimated by looking at different design options of the ETS and their impacts on costs and revenues for full service airlines, low cost carriers (LCCs), holiday carriers as well as regional carriers.

The integration of aviation into emission trading schemes poses complex challenges for both environmental economics and political sensitivities. The implementation of a global environmental approach seems highly unlikely because of divergent political interests. In contrast, integration of European aviation into the EU-ETS may be politically viable in the medium term. Quantitative analysis shows that implementing European Commission’s plans in their current form would produce relatively moderate financial impacts on airlines subject to the ETS. Even under unfavourable conditions, cost increases for Lufthansa would be lower than 1% of their traffic revenues from flights subject to the ETS. For Ryanair cost increases up to 3% of traffic revenues can be expected. Compared to the additional costs resulting from the ETS such increases are small compared to recent fuel price rise; Lufthansa’s jet fuel increase in 2005 over 2004 was h 800 million whereas the ETS would add a maximum of about h 101 million additional costs in 2012 even under the most unfavourable combination of parameters. The results also show that it is likely to become difficult to integrate aviation into the EU-ETS without producing competitive effects. For low cost carriers and regional airlines, the financial impact is likely to be significantly greater than for network carriers. Nevertheless, the financial success of low cost carriers (LCCs) is not likely to be adversely affected because their operating margins exceed the market average.