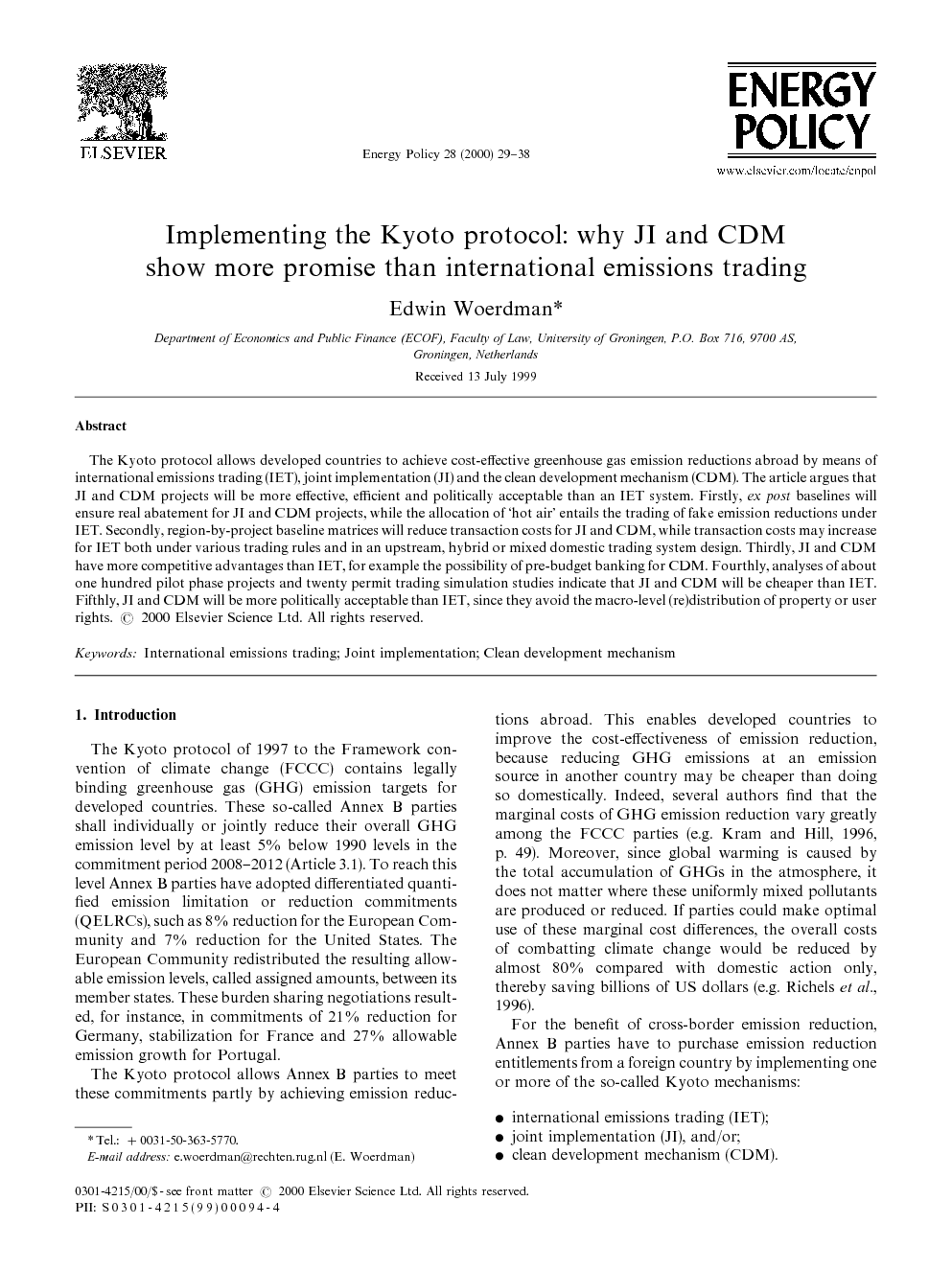 The Kyoto protocol allows developed countries to achieve cost-effective greenhouse gas emission reductions abroad by means of international emissions trading (IET), joint implementation (JI) and the clean development mechanism (CDM). The article argues that JI and CDM projects will be more effective, efficient and politically acceptable than an IET system. Firstly, ex post baselines will ensure real abatement for JI and CDM projects, while the allocation of `hot air’ entails the trading of fake emission reductions under IET. Secondly, region-by-project baseline matrices will reduce transaction costs for JI and CDM, while transaction costs may increase for IET both under various trading rules and in an upstream, hybrid or mixed domestic trading system design. Thirdly, JI and CDM have more competitive advantages than IET, for example the possibility of pre-budget banking for CDM. Fourthly, analyses of about one hundred pilot phase projects and twenty permit trading simulation studies indicate that JI and CDM will be cheaper than IET. Fifthly, JI and CDM will be more politically acceptable than IET, since they avoid the macro-level (re)distribution of property or user rights.

The Kyoto protocol of 1997 to the Framework convention of climate change (FCCC) contains legally binding greenhouse gas (GHG) emission targets for developed countries. These so-called Annex B parties shall individually or jointly reduce their overall GHG emission level by at least 5% below 1990 levels in the commitment period 2008–2012 (Article 3.1). To reach this level Annex B parties have adopted differentiated quantified emission limitation or reduction commitments (QELRCs), such as 8% reduction for the European Community and 7% reduction for the United States. The European Community redistributed the resulting allowable emission levels, called assigned amounts, between its member states. These burden sharing negotiations resulted, for instance, in commitments of 21% reduction for Germany, stabilization for France and 27% allowable emission growth for Portugal. The Kyoto protocol allows Annex B parties to meet these commitments partly by achieving emission reductions abroad. This enables developed countries to improve the cost-effectiveness of emission reduction, because reducing GHG emissions at an emission source in another country may be cheaper than doing so domestically. Indeed, several authors find that the marginal costs of GHG emission reduction vary greatly among the FCCC parties (e.g. Kram and Hill, 1996, p. 49). Moreover, since global warming is caused by the total accumulation of GHGs in the atmosphere, it does not matter where these uniformly mixed pollutants are produced or reduced. If parties could make optimal use of these marginal cost differences, the overall costs of combatting climate change would be reduced by almost 80% compared with domestic action only, thereby saving billions of US dollars (e.g. Richels et al., 1996). For the benefit of cross-border emission reduction, Annex B parties have to purchase emission reduction entitlements from a foreign country by implementing one or more of the so-called Kyoto mechanisms: • international emissions trading (IET); • joint implementation (JI), and/or; • clean development mechanism (CDM). Within the Annex B region a developed country may purchase assigned amounts (AAs) by means of IET (Article 17), and/or emission reduction units (ERUs) from JI projects (Article 6). An Annex B party may also buy certified emission reductions (CERs) from developing countries by means of CDM projects (Article 12). Policy makers in developed countries have to decide how much money to invest in which Kyoto mechanism(s). They have to know, among other things, which Kyoto mechanism(s) will be most effective and efficient. Unfortunately this is uncertain, because a market in emission reduction entitlements will only just develop, at least visibly, after 2008. Nevertheless, these strategic investment decisions have to be taken in the short term, especially since CERs which accrue from CDM projects between 2000 and 2008 can be banked in order to use them for the commitment period 2008–2012. Several environmental economists claim that emission reduction entitlements from IET will be more environmentally sound and cheaper than those from JI or CDM (e.g. Tietenberg, 1992; Grubb et al., 1998; Zhang and Nentjes, 1999). However, contrary to their findings, we argue that JI and CDM will be more effective, efficient and politically acceptable than IET in implementing the Kyoto protocol. This assessment is mainly based on institutional economics, transaction cost theory, baseline emission methodology and the theory of competitive advantages. Furthermore, trading simulation studies and recent empirical data from pilot phase projects of activities implemented jointly (AIJ) and from the SO2 allowance trading market in the United States are taken into account. The following section discusses some basic features of the Kyoto mechanisms. More detailed characteristics of these flexible instruments will be treated indirectly in the sections thereafter. Section 3 not only shows why IET will entail fake emission reductions, but also describes how real abatement from JI and CDM projects can be guaranteed. Section 4 specifies the various market design options for IET in which transaction costs may increase and expounds a method to decrease transaction costs for JI and CDM. Section 5 exposes the competitive advantages of CDM and JI in contrast with the relatively weak competitive position of IET. In Section 6 the analyses of about 100 pilot phase projects and 20 permit trading simulation studies are evaluated, indicating that JI and CDM will be cheaper than IET. Section 7 explains that JI and CDM avoid certain macro-level allocation problems, making them more politically acceptable than IET. Finally, a conclusion is presented according to which JI and CDM projects show more promise than a system of IET in realizing environmentally sound and low-cost international GHG emission reduction.

According to our observations joint implementation (JI) and the clean development mechanism (CDM) will be more effective, efficient and politically acceptable than international emissions trading (IET) in implementing the Kyoto protocol. As we have seen, this argument is mainly based on the theory of competitive advantages, transaction cost theory, baseline emission methodology and institutional economics in combination with the results of twenty permit trading simulation studies and empirical analyses of about one hundred pilot phase projects. Therefore, we conclude that JI and CDM projects show more promise than IET in realizing environmentally sound and low-cost international GHG emission reduction. Our findings suggest that both government and firms in Annex B parties could start investing in CDM projects now and develop JI projects well before 2008.