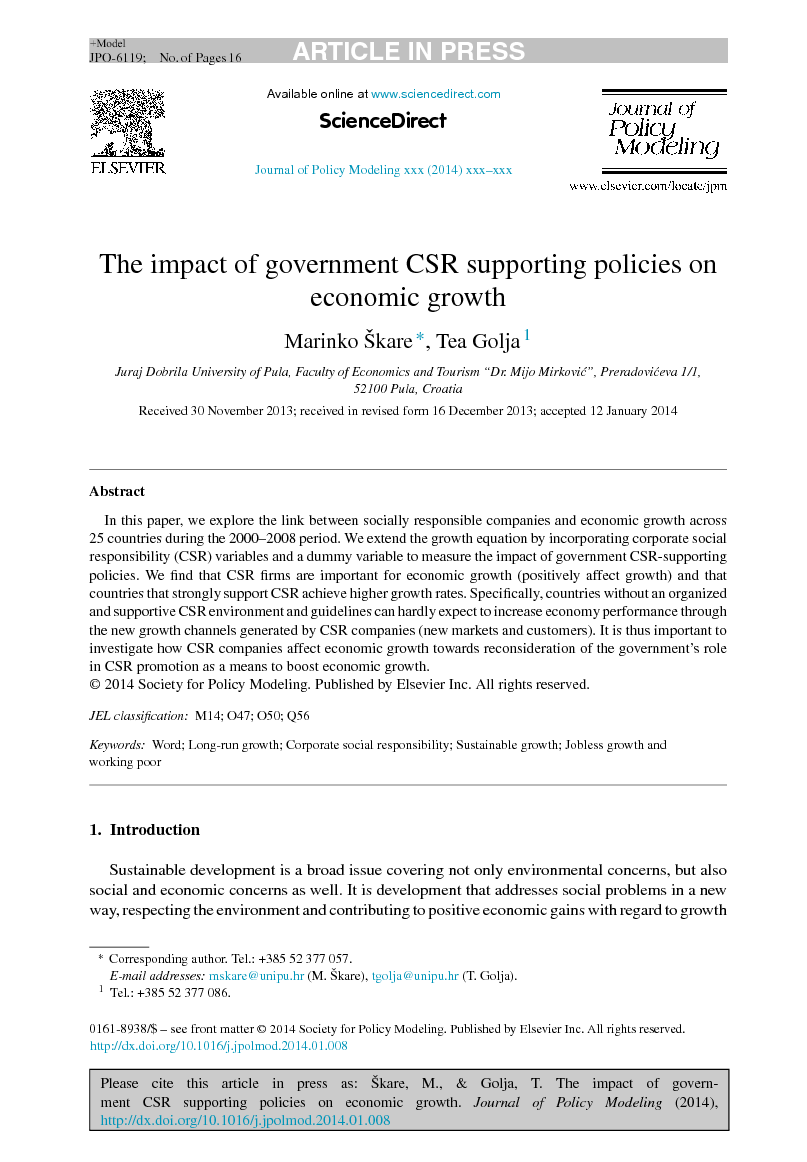 In this paper, we explore the link between socially responsible companies and economic growth across 25 countries during the 2000–2008 period. We extend the growth equation by incorporating corporate social responsibility (CSR) variables and a dummy variable to measure the impact of government CSR-supporting policies. We find that CSR firms are important for economic growth (positively affect growth) and that countries that strongly support CSR achieve higher growth rates. Specifically, countries without an organized and supportive CSR environment and guidelines can hardly expect to increase economy performance through the new growth channels generated by CSR companies (new markets and customers). It is thus important to investigate how CSR companies affect economic growth towards reconsideration of the government's role in CSR promotion as a means to boost economic growth.

Sustainable development is a broad issue covering not only environmental concerns, but also social and economic concerns as well. It is development that addresses social problems in a new way, respecting the environment and contributing to positive economic gains with regard to growth and development. This kind of development aligns the interests of decision-makers with those of society, whilst focusing on long-term benefits and the wellbeing of society. Activities performed by small, medium-sized, and big companies have a strong impact on social and environmental issues addressed within the concept of sustainable development. Climate change, ozone depletion, biodiversity loss, human rights, labour rights, child labour, and discrimination of women and minorities are all issues under direct or indirect influence of business activities. In the light of the recent financial and economic crises, corporations have been put under scrutiny. Transparency and accountability are taking an ever so high priority. Corporations are creating and adding value through the production of goods and the provision of services for the larger society and for their customers. In this process, they generate profits for their shareholders as well as welfare for the community in which they operate, especially regarding the job creation. In this way, in order to create the added value, activities performed by companies should be balanced with regard to the impacts they have on the larger community. Their ordinary business practice has to be put in harmony with the changing environment. Should small, medium-sized and large companies take this issue under review or must they pay attention to business performance only? It is a simple question: what is in it for them and why should they worry about the impact of their businesses on economic growth and society? The behaviour of socially responsible firms might have a positive influence on economic growth. On the other hand, firms engaged in corporate social responsibility (CSR) activities would face additional costs associated with such activities which could impair business performance. This would happen when CSR activities are followed by lower profits. Given that argument, there is little agreement on whether CSR firms are important for growth. The purpose of this paper is to determine the impact of CSR firms on economic growth (positive or negative) and whether countries that strongly promote CSR can count on higher growth rates. Extensive research on economic growth determinants is available in Barro (1991), Barro and Sala-i-Martin (2004), Mankiw, Romer, and Weil (1992), Aghion and Howitt (2009), De La Croix and Michel (2008) and Acemoglu (2009). Studies identify about 21 variables and their possible connection with economic growth ranging from starting level of gross domestic product (GDP) per capita to the degree of capitalism. None of these researches investigates a possible nexus between CSR and economic growth. A large body of research as presented in Margolis and Walsch (2003) examines the relationship between corporate social and corporate financial performance. However, only a few try to explore the direct link between CSR and economic growth. Somehow related studies on the social capital issue in the works of Putnam (1995), Helliwell and Putnam (1995), Hall and Jones (1996), Knack and Keefer (1997), and Coleman (1988) look for differences in growth rates through the roles of trust, societal structure, and social capital in the creation of human capital, through economic payoffs to social capital, and through the role of civil society. Navarro Espigares and González López (2006) explore the link between CSR indicators and economic growth components in the Organization for Economic Cooperation and Development (OECD). They find a positive link between CSR indicators and economic growth. Our empirical findings have important policy implications. In line with the study of Navarro Espigares and González López (2006), we find CSR to be a significant economic growth determinant. Higher share of CSR firms in the economy means higher economic growth. Business performance of CSR firms positively affects economic growth and their associated share in growth is 6% for 25 economies included in the panel. Empirical results show that socially responsible behaviour should be taken into account when investigating the factors of economic growth, because in the future such behaviour is surely to become more meaningful. In fact, countries with strong and supporting CSR policy framework achieve on average from +0.001 to +0.02 percentage points higher growth rates. Policy makers should focus their attention to social and political structures accelerating productive economic activity by encouraging socially responsible behaviour. The impact of CSR government activities on long-run growth is limited for now (variable policy has low impact on growth). This is the reflection of the poor CSR policy structure being too regulative and less simulative for CSR firms. A more flexible and targeted government policy supporting firms resolute to engage socially would result in higher growth rate differences. This paper is organized as follows. In Section 2 the microeconomic and macroeconomic benefits of social responsibility are laid out. Section 3 deals with the panel data techniques and the generalized method of moments (GMM) model framework. Section 4 presents the empirical results while Section 5 provides the concluding remarks.

The analysis of this paper shows that CSR firms are important for economic growth. CSR companies have a positive and statistically significant effect on a country's economic growth. The results follow the findings of Navarro Espigares and González López (2006) identifying a positive link between CSR indicators and economic growth. Our empirical results using a large panel of countries with significant time dimension confirm their findings. Furthermore, we use 17 different model specifications to assess the importance of CSR firms as growth determinants. The empirical results of our study draw a very significant policy implication asserting that countries strongly promoting CSR activities achieve higher growth rates. This important conclusion should intrigue policymakers on rethinking the role of the government in CSR promotion as a means to boost economic growth. Our findings are subject to a number of limitations. Only available data were used in the analysis, so the results cannot be simply generalized to other countries outside the panel. It is possible for the link between CSR firms and growth to differ among countries depending on market conditions and political stability. We use a widely accepted growth equation, but more variables having an effect on growth could give different results if included in the model. How CSR firms affect economic growth needs deeper study. In particular, the link between the costs of CSR activities and the firm's return should be addressed. Another important aspect is what governments are expected to do and how they can defray a part of the CSR costs. In the end, it is important to find the answer to the question of why firms should be concerned with economic growth and if they should, who is expected to guarantee higher returns, the market or the government. These questions were not part of this study but should be investigated in future research aimed at ascertaining the channels through which CSR firms affect economic growth.