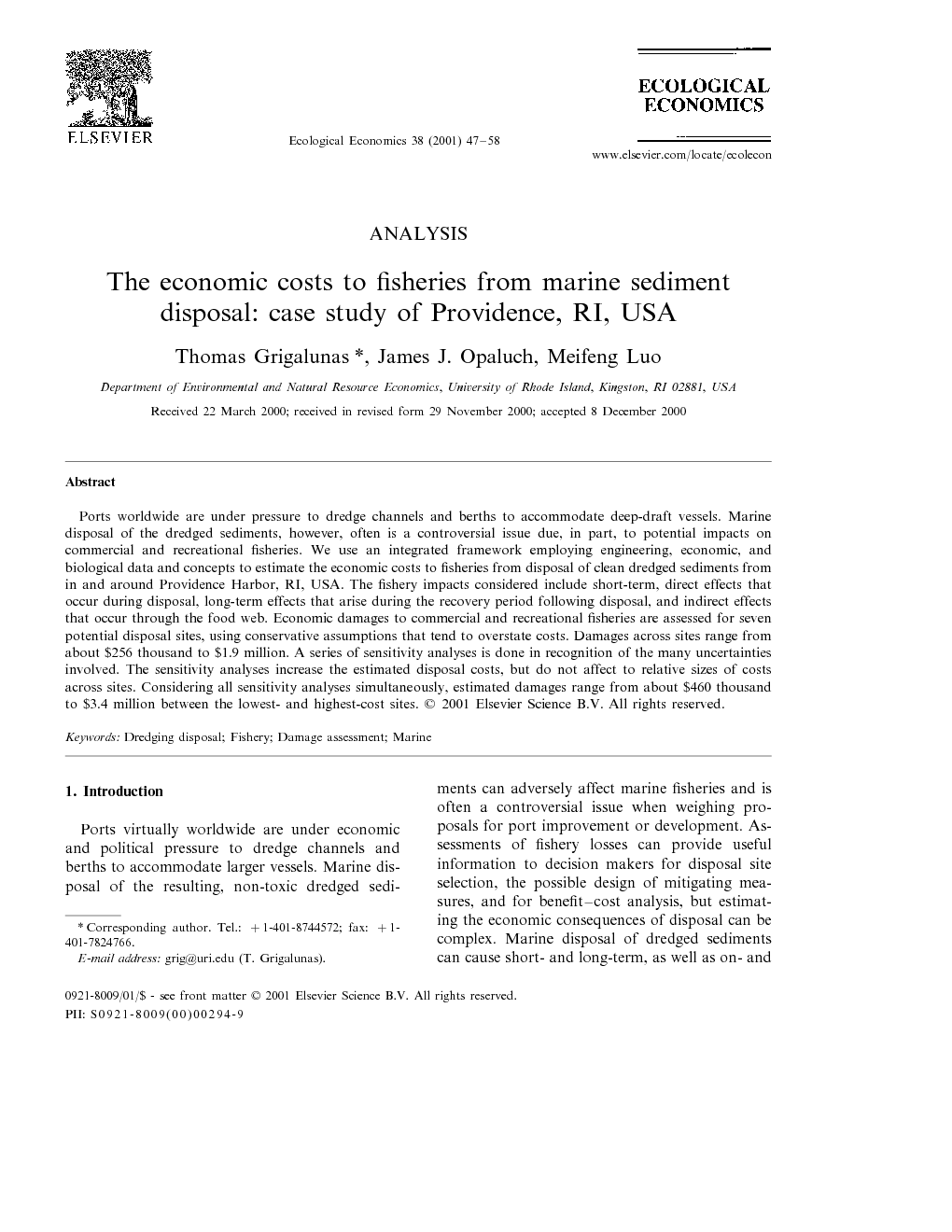 Ports worldwide are under pressure to dredge channels and berths to accommodate deep-draft vessels. Marine disposal of the dredged sediments, however, often is a controversial issue due, in part, to potential impacts on commercial and recreational fisheries. We use an integrated framework employing engineering, economic, and biological data and concepts to estimate the economic costs to fisheries from disposal of clean dredged sediments from in and around Providence Harbor, RI, USA. The fishery impacts considered include short-term, direct effects that occur during disposal, long-term effects that arise during the recovery period following disposal, and indirect effects that occur through the food web. Economic damages to commercial and recreational fisheries are assessed for seven potential disposal sites, using conservative assumptions that tend to overstate costs. Damages across sites range from about $256 thousand to $1.9 million. A series of sensitivity analyses is done in recognition of the many uncertainties involved. The sensitivity analyses increase the estimated disposal costs, but do not affect to relative sizes of costs across sites. Considering all sensitivity analyses simultaneously, estimated damages range from about $460 thousand to $3.4 million between the lowest- and highest-cost sites.

Ports virtually worldwide are under economic and political pressure to dredge channels and berths to accommodate larger vessels. Marine disposal of the resulting, non-toxic dredged sediments can adversely affect marine fisheries and is often a controversial issue when weighing proposals for port improvement or development. Assessments of fishery losses can provide useful information to decision makers for disposal site selection, the possible design of mitigating measures, and for benefit–cost analysis, but estimating the economic consequences of disposal can be complex. Marine disposal of dredged sediments can cause short- and long-term, as well as on- and off-site effects on finfish, shellfish and crustacea (primarily lobster). Also, ecosystem (food web) effects may occur, and losses to recreational, as well as commercial, species can be expected. Further, the nature and scale of the impacts on fisheries depend upon the site considered, the amount and nature of material to be disposed of, and the size of the mound created at a disposal site. Assessment of the cost to fisheries of dredge disposal should attempt to capture each of the above elements. Ideally, an assessment should be done on a site-specific basis, since species composition, abundance, and age structure, as well as the extent of the area affected, likely will differ between potential disposal sites.1 Thus, what is needed is a framework that incorporates relevant economic, biological, and engineering information. This paper presents an integrated framework that is used to estimate the economic costs to fisheries of marine sediment disposal applied to the case of dredging in and around the Port of Providence, RI, USA. The last dredging for the port was done in 1974, and since that time sedimentation has restricted use of the approach channel for commercial traffic and also limited access to local marinas by pleasure craft. As a result of channel filling and narrowing, some commercial vessels must await high tides, only one-way traffic at a time is permitted, and large tankers often must off load oil into shallow-draft vessels for delivery to the port, all of which increase transportation costs. To assess the economic cost to fisheries of dredge disposal, we use a bio-economic framework. We also adapt the model to include a simplified food web component, generally following Applied Science Associates et al. (1996). The bio-economic model, which is a Beverton–Holt, cohort- or age-class model, is described in Section 2. Here we note that a cohort model is appropriate for the issue considered in this paper for several reasons. For example, a cohort model can account for mortality to young-of-year and juveniles, where the consequences for lost catch may not be realized for years and may occur offsite. Without a cohort model, the eventual loss in catch due to mortality to sub-legal size fish during disposal might be omitted, or would require use of an ad hoc approach. Using the bioeconomic framework, we estimate the incremental costs of marine disposal of some 5.1 million cubic yards (‘mcy’) of clean sediment as a result of dredging to improve port and marina access in and around the Providence River and Harbor at the head of Narragansett Bay, RI, USA. Seven marine disposal sites are being considered, three in Narragansett Bay and four in Rhode Island (RI) Sound. Incremental costs are estimated as the present value of lost commercial benefits (economic rent) plus lost recreational benefits (consumer surplus) through the period of recovery. Any analysis of the consequences of sediment disposal must squarely address data issues. To implement the model, we draw upon data from several sources, which are described in Section 3 and an Appendix A to this paper and are presented in detail in Grigalunas et al. (1999). We recognize that considerable uncertainty surrounds some of the data, and information available for some variables is incomplete. For these reasons, extensive sensitivity analyses are used in order to assess how the estimate of incremental costs to fisheries at different sites changes when alternative assumptions or data are employed. Thus, rather than presenting an estimate of ‘the’ cost of disposal at sites, we show a range of estimates. Further, when judgments must be made, we adopt a conservative stance that overstates the cost to fisheries from disposal. Lastly, we employ a transparent approach to allow readers to understand the methodology, assumptions, and data used, and their strength and limitations. We emphasize that the focus in this paper is on the incremental costs to fisheries due to disposal of clean sediments. Contaminated sediments from the dredge area will not be disposed of at the sites considered here, and an analysis of such issues is outside of the scope of this paper. Also, we do not consider differences in transportation costs from the dredge area to the potential sites, a factor which influences the overall costs of disposal and perhaps will affect the site selected.

Ports throughout the world are under pressure to deepen approach channels and berths. Proposals for marine disposal of sediments are common, important, and often controversial issues for port maintenance and development. A central concern often is the impact of marine disposal on fisheries. This paper applies a bio-economic model to assess the economic costs on fisheries of marine disposal of 5.1 mcy of clean dredge sediments. The model was applied to screen seven potential sites for disposal of sediments dredged from in and around the Port of Providence, RI, USA. Due to many data uncertainties, assumptions were employed that serve to overstate costs, and several sensitivity analyses were made. The results show considerable variation in the costs of disposal among the sites, although Narragansett Bay sites systematically have much higher costs than RI Sound sites. Long-term costs, offsite costs, and to a somewhat lesser extent, ecological — food web — effects were found to be important. These results support the use of a cohort-type model and attempts to incorporate food web effects in assessing the costs of dredging. Sensitivity analyses suggest that increases in mound area, time to recovery, larger food web effects, and use of a lower discount rate raise the estimated incremental costs of disposal, but do not substantially change the ranking of sites. In summary, the results underscore the need for integrating economic, biological, and engineering estimates when studying the costs of dredge disposal. The results also illustrate the importance of incorporating long-term and ecosystem effects and effects on recreational as well as commercial uses when assessing the economic cost of marine dredge disposal.