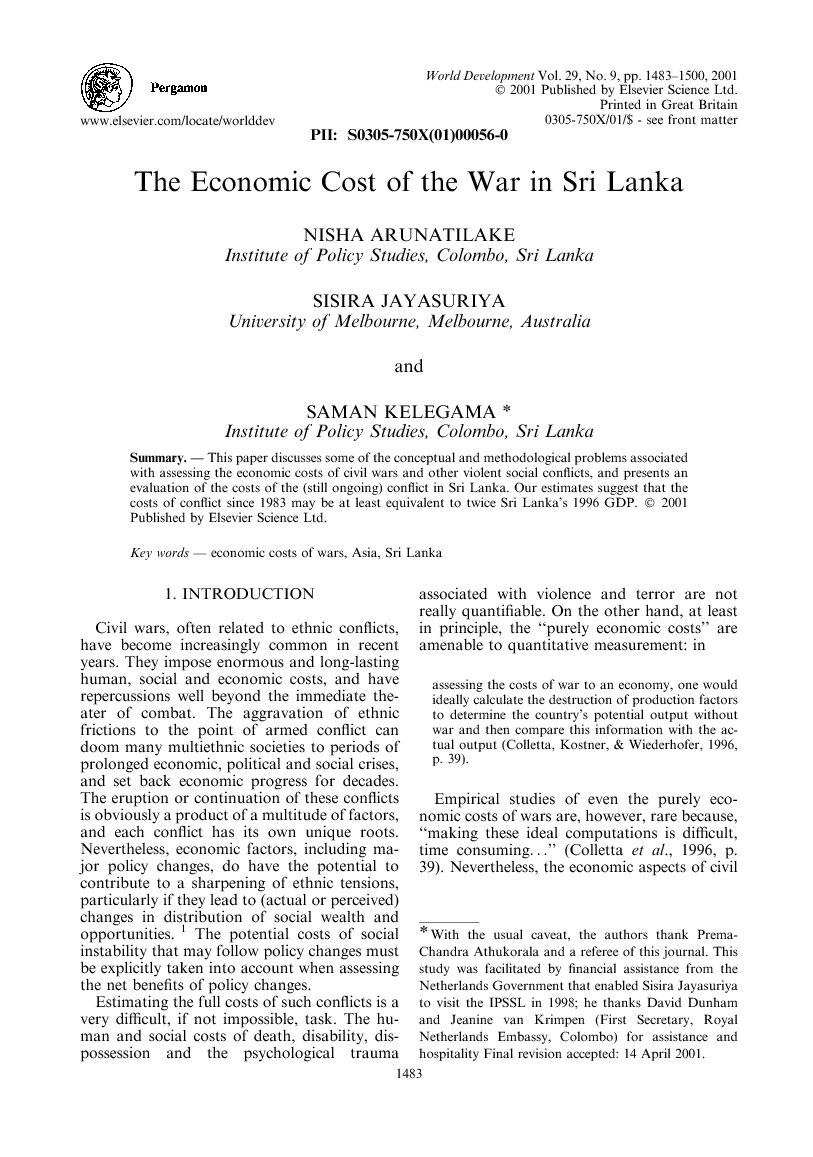 This paper discusses some of the conceptual and methodological problems associated with assessing the economic costs of civil wars and other violent social conflicts, and presents an evaluation of the costs of the (still ongoing) conflict in Sri Lanka. Our estimates suggest that the costs of conflict since 1983 may be at least equivalent to twice Sri Lanka's 1996 GDP.

Civil wars, often related to ethnic conflicts, have become increasingly common in recent years. They impose enormous and long-lasting human, social and economic costs, and have repercussions well beyond the immediate theater of combat. The aggravation of ethnic frictions to the point of armed conflict can doom many multiethnic societies to periods of prolonged economic, political and social crises, and set back economic progress for decades. The eruption or continuation of these conflicts is obviously a product of a multitude of factors, and each conflict has its own unique roots. Nevertheless, economic factors, including major policy changes, do have the potential to contribute to a sharpening of ethnic tensions, particularly if they lead to (actual or perceived) changes in distribution of social wealth and opportunities.1 The potential costs of social instability that may follow policy changes must be explicitly taken into account when assessing the net benefits of policy changes. Estimating the full costs of such conflicts is a very difficult, if not impossible, task. The human and social costs of death, disability, dispossession and the psychological trauma associated with violence and terror are not really quantifiable. On the other hand, at least in principle, the “purely economic costs” are amenable to quantitative measurement: in assessing the costs of war to an economy, one would ideally calculate the destruction of production factors to determine the country's potential output without war and then compare this information with the actual output (Colletta, Kostner, & Wiederhofer, 1996, p. 39). Empirical studies of even the purely economic costs of wars are, however, rare because, “making these ideal computations is difficult, time consuming…” (Colletta et al., 1996, p. 39). Nevertheless, the economic aspects of civil wars are now receiving increasing attention (see, for example, Collier & Hoeffler, 1998).2 The primary aim of this paper is to assess the economic costs of the long drawn-out and still ongoing ethnic conflict in Sri Lanka.3 But in doing so, we also present a critical review of the analytical approaches adopted in previous studies and clarify some important conceptual and methodological issues. The paper is organized as follows. Section 2 presents a brief background on the Sri Lankan war. Section 3 describes some of the consequences of the war, Section 4 discusses some methodological issues related to estimating costs of a war and Section 5 provides a critique of earlier studies. In Section 6 we describe our methodological framework, and present our estimates of the costs. Section 7 provides the estimate of total costs and some concluding remarks.