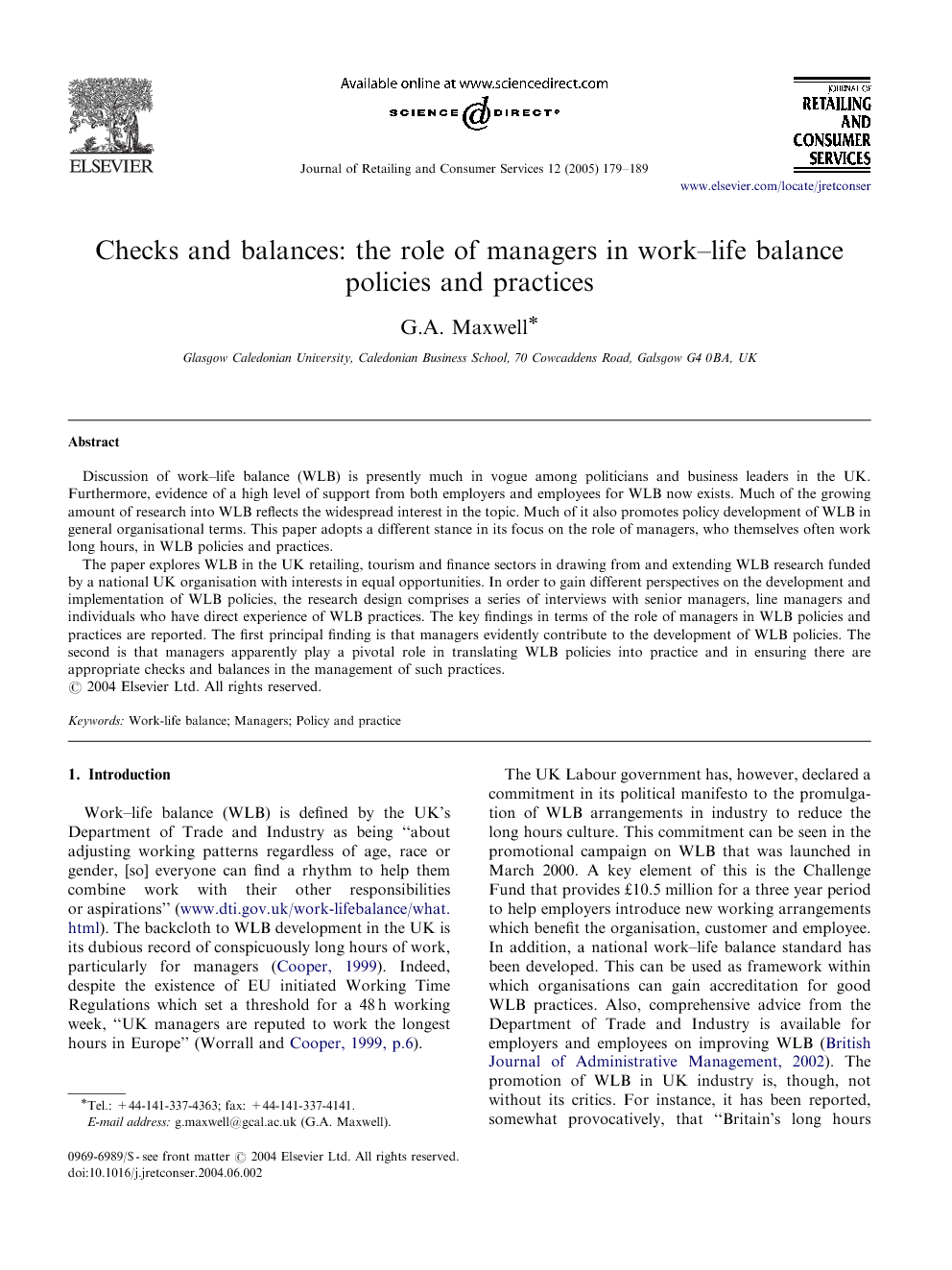 Discussion of work–life balance (WLB) is presently much in vogue among politicians and business leaders in the UK. Furthermore, evidence of a high level of support from both employers and employees for WLB now exists. Much of the growing amount of research into WLB reflects the widespread interest in the topic. Much of it also promotes policy development of WLB in general organisational terms. This paper adopts a different stance in its focus on the role of managers, who themselves often work long hours, in WLB policies and practices. The paper explores WLB in the UK retailing, tourism and finance sectors in drawing from and extending WLB research funded by a national UK organisation with interests in equal opportunities. In order to gain different perspectives on the development and implementation of WLB policies, the research design comprises a series of interviews with senior managers, line managers and individuals who have direct experience of WLB practices. The key findings in terms of the role of managers in WLB policies and practices are reported. The first principal finding is that managers evidently contribute to the development of WLB policies. The second is that managers apparently play a pivotal role in translating WLB policies into practice and in ensuring there are appropriate checks and balances in the management of such practices.

Work–life balance (WLB) is defined by the UK's Department of Trade and Industry as being “about adjusting working patterns regardless of age, race or gender, [so] everyone can find a rhythm to help them combine work with their other responsibilities or aspirations” (www.dti.gov.uk/work-lifebalance/what.html). The backcloth to WLB development in the UK is its dubious record of conspicuously long hours of work, particularly for managers (Cooper, 1999). Indeed, despite the existence of EU initiated Working Time Regulations which set a threshold for a 48 h working week, “UK managers are reputed to work the longest hours in Europe” (Worrall and Cooper, 1999, p.6). The UK Labour government has, however, declared a commitment in its political manifesto to the promulgation of WLB arrangements in industry to reduce the long hours culture. This commitment can be seen in the promotional campaign on WLB that was launched in March 2000. A key element of this is the Challenge Fund that provides £10.5 million for a three year period to help employers introduce new working arrangements which benefit the organisation, customer and employee. In addition, a national work–life balance standard has been developed. This can be used as framework within which organisations can gain accreditation for good WLB practices. Also, comprehensive advice from the Department of Trade and Industry is available for employers and employees on improving WLB (British Journal of Administrative Management, 2002). The promotion of WLB in UK industry is, though, not without its critics. For instance, it has been reported, somewhat provocatively, that “Britain's long hours culture [is] a myth and ..work–life balance protagonists [are] anti-business” (Muktarsingh, 2003, p. 35). Further, it has been argued that the work ethic in Europe has already reduced to a point where “work ethic is being replaced by a secularised sloth that threatens to leave the European Union even further behind America” in working hours and days (Ferguson, 2003, p. 4).What is less controversial is the view that balancing working life and family life in the modern day is “a complex phenomena” (Tyrkko, 2002, p. 107), and as such a topic that warrants explanation and research attention. This paper outlines the emergence of WLB in the UK as a preface for putting the role of managers in WLB policies and practices in the retailing, tourism and finance sectors of the service industry under scrutiny.

The case analyses of managers in WLB that are reported here offer insights into different sizes of organisations and different forms of WLB in organisations in Scotland. It is possible that national cultures in different countries predispose receptiveness to WLB, so this may constitute a geographical boundary to the primary research. However, the findings will arguably have some resonance for organisations in other countries facing similar business and labour market conditions to those in Scotland. Further, there are several recurrent points in and across the service sector case organisations that strongly suggest emerging patterns in the role of managers in WLB developments in this context at least. Firstly, managers evidently are at the hub of initiating WLB, albeit in the face of some line manager recalcitrance where this is a new way of working. Secondly, line managers are the key to operationalising WLB practices wherein there is no apparent perception of bias towards women, but there is a recognition that working mothers in particular may benefit from WLB. The pivotal role of these managers is recognised at all levels of informant perspectives comprising senior operational managers, HR specialists, line managers themselves and their staff. Importantly, the line managers generate practices in WLB under the umbrella framework of organisational policy. Therefore formal organisational support, arguably above organisational culture, is an important factor in WLB. Thirdly, there is a miscellany of organisational benefits associated with WLB. These go beyond those identified in the secondary sources to include reduced overheads in office space, empowerment and team work, and improving employees’ work skills. WLB seems to offer mutual benefits to employees and their employers, though there is evidence that managers themselves may not be maximising WLB practices in continuing to work long hours. Above all and in sum, the case study investigations highlight that managers play a pivotal role in ensuring checks and balances in WLB from policy development to practical applications. Far from being removed from the management of their employees, involvement in WLB brings with it an expanded role for line managers in employee management, one of the hallmarks of human resource management (Leopold, 2002). Further research would both inform academic debate on WLB and support organisations in developing WLB with line managers.