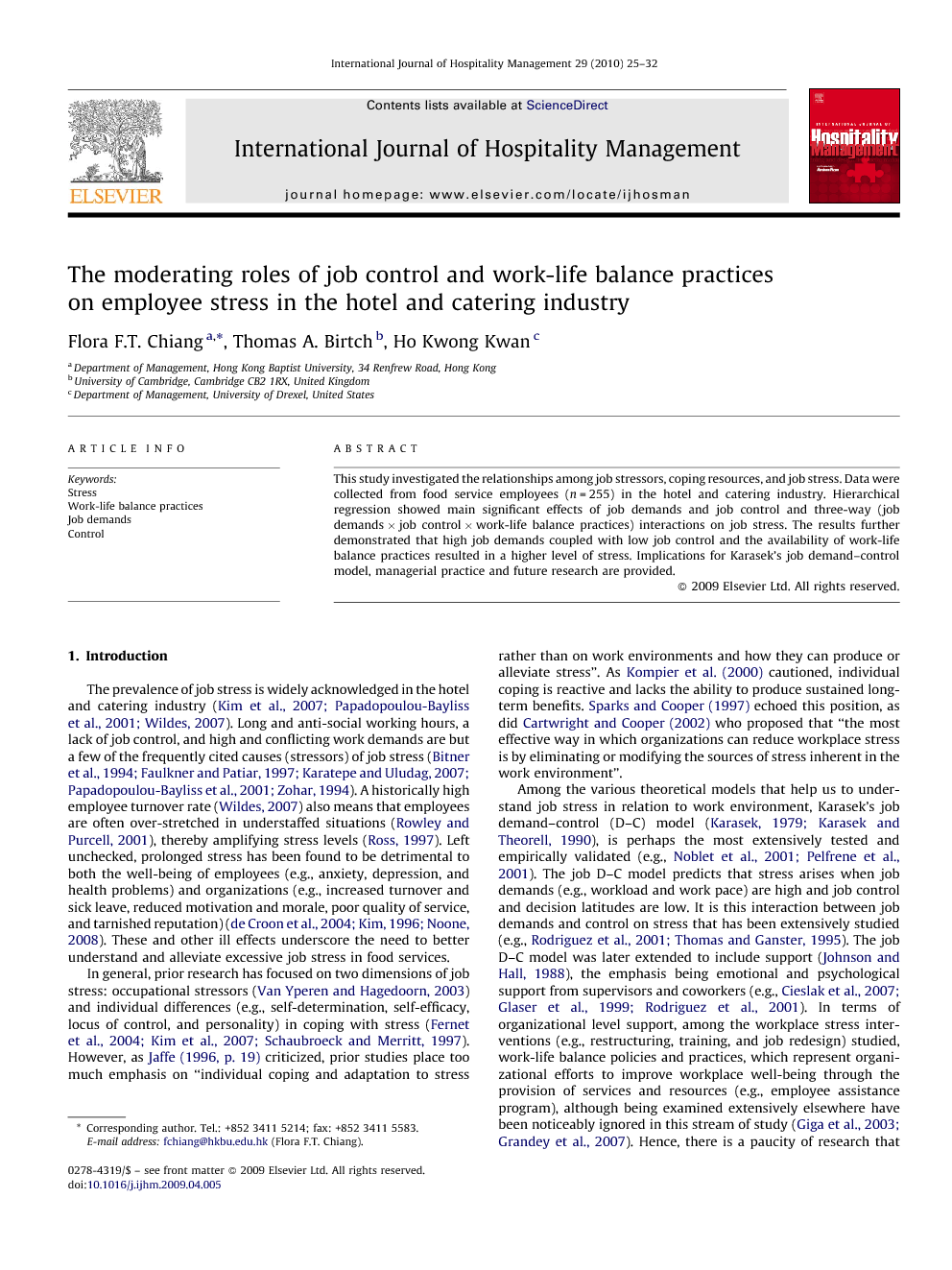 The prevalence of job stress is widely acknowledged in the hotel and catering industry (Kim et al., 2007, Papadopoulou-Bayliss et al., 2001 and Wildes, 2007). Long and anti-social working hours, a lack of job control, and high and conflicting work demands are but a few of the frequently cited causes (stressors) of job stress (Bitner et al., 1994, Faulkner and Patiar, 1997, Karatepe and Uludag, 2007, Papadopoulou-Bayliss et al., 2001 and Zohar, 1994). A historically high employee turnover rate (Wildes, 2007) also means that employees are often over-stretched in understaffed situations (Rowley and Purcell, 2001), thereby amplifying stress levels (Ross, 1997). Left unchecked, prolonged stress has been found to be detrimental to both the well-being of employees (e.g., anxiety, depression, and health problems) and organizations (e.g., increased turnover and sick leave, reduced motivation and morale, poor quality of service, and tarnished reputation) (de Croon et al., 2004, Kim, 1996 and Noone, 2008). These and other ill effects underscore the need to better understand and alleviate excessive job stress in food services. In general, prior research has focused on two dimensions of job stress: occupational stressors (Van Yperen and Hagedoorn, 2003) and individual differences (e.g., self-determination, self-efficacy, locus of control, and personality) in coping with stress (Fernet et al., 2004, Kim et al., 2007 and Schaubroeck and Merritt, 1997). However, as Jaffe (1996, p. 19) criticized, prior studies place too much emphasis on “individual coping and adaptation to stress rather than on work environments and how they can produce or alleviate stress”. As Kompier et al. (2000) cautioned, individual coping is reactive and lacks the ability to produce sustained long-term benefits. Sparks and Cooper (1997) echoed this position, as did Cartwright and Cooper (2002) who proposed that “the most effective way in which organizations can reduce workplace stress is by eliminating or modifying the sources of stress inherent in the work environment”. Among the various theoretical models that help us to understand job stress in relation to work environment, Karasek's job demand–control (D–C) model (Karasek, 1979 and Karasek and Theorell, 1990), is perhaps the most extensively tested and empirically validated (e.g., Noblet et al., 2001 and Pelfrene et al., 2001). The job D–C model predicts that stress arises when job demands (e.g., workload and work pace) are high and job control and decision latitudes are low. It is this interaction between job demands and control on stress that has been extensively studied (e.g., Rodriguez et al., 2001 and Thomas and Ganster, 1995). The job D–C model was later extended to include support (Johnson and Hall, 1988), the emphasis being emotional and psychological support from supervisors and coworkers (e.g., Cieslak et al., 2007, Glaser et al., 1999 and Rodriguez et al., 2001). In terms of organizational level support, among the workplace stress interventions (e.g., restructuring, training, and job redesign) studied, work-life balance policies and practices, which represent organizational efforts to improve workplace well-being through the provision of services and resources (e.g., employee assistance program), although being examined extensively elsewhere have been noticeably ignored in this stream of study (Giga et al., 2003 and Grandey et al., 2007). Hence, there is a paucity of research that investigates the influence of organizational level support, in particular work-life balance practices, which may act to buffer the impact of high job demands on job stress. Efforts to minimize employees’ job stress are therefore being restricted by a lack of sound evidence on the moderating role that such practices play. To incorporate such practices into the job D–C model allows us to pull together the various dimensions of both job content and context factors cohesively in systematic theory building. Although there is an extensive body of research dedicated to job stress, another surprising absence is that most prior studies are limited to the manufacturing (e.g., Conti et al., 2006 and Wall et al., 1996) and health care (e.g., Schaubroeck and Merritt, 1997 and Van Yperen and Hagedoorn, 2003) settings. Few recent studies, if any, have been conducted in the hotel and catering industry context, which is uniquely different from other settings (Karatepe and Uludag, 2007). Addressing the above gaps is therefore particularly important given that food service work is typically associated with a high level of service failure (Miller et al., 2000 and Yoo et al., 2006), frequent exposure to customer complaints (Wildes, 2007), limited job control and low decision latitude (Papadopoulou-Bayliss et al., 2001), and other work characteristics, which make these employees highly susceptible to elevated levels of job stress. Building upon and extending previous research, our study contributes to the job stress literature in several ways. First, we extend the current job D–C model by incorporating human resource management practices, in particular, work-life balance practices and their potential impacts to alleviate the effects of job demands on job stress. Second, we address the impact of both job content (demands and control) and context (work-life balance practices) that may play in moderating the relationship between job demands and job stress. Since employees’ affective and psychological evaluation of their job is shaped not only by job content (job demands and control) but also by their perceptions toward job context variables (i.e., the availability of organizational support such as work-life balance practices), these two components should be studied concurrently. Finally, our study addresses concerns noted by a number of researchers (e.g., Stamper and Johlke, 2003) that much of the past research has been conducted using subjects (e.g., manufacturing workers) which are quite different from those in food service industry (Karatepe and Uludag, 2008). Understanding and reducing employee stress is of growing importance to both hotel managers and researchers.

The findings of this study suggest that job demands are not necessarily stressful, particularly when employees have control over their job responsibilities and receive sufficient support from their organizations (e.g., work-life balance policies). Not only do our results confirm the important role that job control plays in mitigating stress but they also suggest that coping with stress is not solely an individual effort. It entails active support from an organization. In our case, work-life balance practices represent important buffering resources, a constituent that is neglected in the job D–C model. We submit that supportive practices had direct positive impacts on employee perception of control over work environment. They interacted with job control to influence job stress. Therefore, job stress is influenced by both the job content (control) and context (HRM policies and work-related resources and practices). To incorporate such practices into the job D–C model allows us to pull together the various dimensions of both job content (demands) and context (supplies) factors cohesively in systematic theory building. For practitioners in the hotel and catering industry, our findings suggest that organizations can utilize HRM strategies to increase the level of well-being at work.