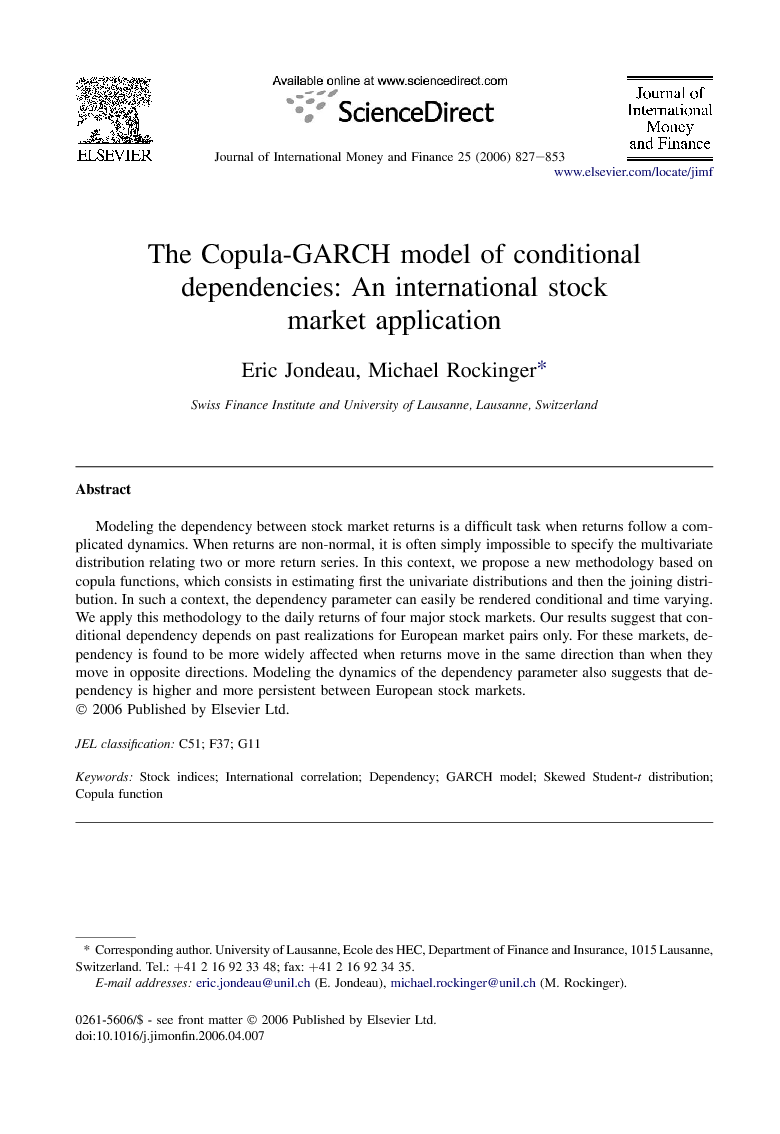 Modeling the dependency between stock market returns is a difficult task when returns follow a complicated dynamics. When returns are non-normal, it is often simply impossible to specify the multivariate distribution relating two or more return series. In this context, we propose a new methodology based on copula functions, which consists in estimating first the univariate distributions and then the joining distribution. In such a context, the dependency parameter can easily be rendered conditional and time varying. We apply this methodology to the daily returns of four major stock markets. Our results suggest that conditional dependency depends on past realizations for European market pairs only. For these markets, dependency is found to be more widely affected when returns move in the same direction than when they move in opposite directions. Modeling the dynamics of the dependency parameter also suggests that dependency is higher and more persistent between European stock markets.

An abundant literature has investigated how the correlation between stock market returns varies when markets become agitated. In a multivariate GARCH framework, for instance, Hamao et al., 1990 and Susmel and Engle, 1994, and Bekaert and Harvey (1995) have measured the interdependence of returns and volatilities across stock markets. More specifically, Longin and Solnik (1995) have tested the hypothesis of a constant conditional correlation between a large number of stock markets. They found that correlation generally increases in periods of high-volatility of the U.S. market. In addition, in a similar context, tests of a constant correlation have been proposed by Bera and Kim (2002) and Tse (2000). Recent contributions by Kroner and Ng, 1998, Engle and Sheppard, 2001 and Engle, 2002, and Tse and Tsui (2002) have developed GARCH models with time-varying covariances or correlations. As an alternative approach, Ramchand and Susmel (1998) and Ang and Bekaert (2002) have estimated a multivariate Markov-switching model and tested the hypothesis of a constant international conditional correlation between stock markets. They obtained that correlation is generally higher in the high-volatility regime than in the low-volatility regime. In this context, an important issue is how dependency between stock markets can be measured when returns are non-normal. In the GARCH framework, some recent papers have focused on multivariate distributions which allow for asymmetry as well as fat tails. For instance, multivariate skewed distributions, and in particular the skewed Student-t distribution, have been studied by Sahu et al. (2001) and Bauwens and Laurent (2002). In addition, in the Markov-switching context, Chesnay and Jondeau (2001) have tested for a constant correlation between stock returns, while allowing for Student-t innovations. 1 For most types of univariate distributions, however, it is simply impossible to specify a multivariate extension that would allow the dependency structure to be captured. In this paper, we present a new methodology to measure conditional dependency in a GARCH context. Our methodology builds on so-called “copula” functions. These functions provide an interesting tool to model a multivariate distribution when only marginal distributions are known. Such an approach is, thus, particularly useful in situations where multivariate normality does not hold. An additional interesting feature of copulas is the ease with which the associated dependency parameter can be conditioned and rendered time varying, even when complicated marginal dynamics are estimated. We use this methodology to investigate the impact of certain joint stock return realizations on the subsequent dependency of international markets. Many univariate models have been proposed to specify the dynamics of returns. However, given the focus of this work, we draw on recent advances in the modeling of conditional returns that allow second, third, and fourth moments to vary over time. Our univariate model builds on Hansen's (1994) seminal paper. In that paper, a so-called skewed Student-t distribution is derived. This distribution allows for a control of asymmetry and fat-tailedness. By rendering these characteristics conditional, it is possible to obtain time-varying higher moments. 2 This model, therefore, extends Engle's (1982) ARCH and Bollerslev's (1986) GARCH models. In an extension to Hansen, 1994, Jondeau and Rockinger, 2003a and Jondeau and Rockinger, 2003b determine the expression of skewness and kurtosis of the skewed Student-t distribution and show how the cumulative distribution function (cdf) and its inverse can be computed. They show how to simulate data distributed as a skewed Student-t distribution and discuss how to parametrize time-varying higher moments. We then consider two alternative copula functions which have different characteristics in terms of tail dependency: the Gaussian copula that does not allow any dependency in the tails of the distribution, and the Student-t copula that is able to capture such a tail dependency. Finally, we propose several ways to condition the dependency parameter with past realizations. It is thus possible to test several hypotheses of the way in which dependency varies during turbulent periods. In the empirical part of the paper, we investigate the dependency structure between daily returns of major stock market indices over 20 years. As a preliminary step, we provide evidence that the skewed Student-t distribution with time-varying higher moments fits very well the univariate behavior of the data. Then, we check that the Student-t copula is able to capture the dependency structure between market returns. Further scrutiny of the data reveals that the dependency between European markets increases, subsequent to movements in the same direction, either positively or negatively. Furthermore, the strong persistence in the dynamics of the dependency structure is found to reflect a shift, over the sample period, in the dependency parameter. This parameter has increased from about 0.3 over the 1980s to about 0.6 over the next decade. Such a pattern is not found to hold for the dependency structure between the U.S. market and the European markets. The remainder of the paper is organized as follows. In Section 2, we first introduce our univariate model which allows for volatility, skewness, and kurtosis, to vary over time. In Section 3, we introduce copula functions and describe the copulas used in the empirical application. We also describe how the dependency parameter may vary over time. In Section 4, we present the data and discuss our empirical results. Section 5 summarizes our results and concludes.

The methodology developed in this paper resorts to copula functions for modeling dependency between time series, when univariate distributions are complicated and cannot be easily extended to a multivariate setup. We use this methodology to investigate the dependency structure between daily stock market returns over the period 1980e1999. We first provide empirical evidence that the distribution of daily returns may be well described by the skewed Student-t distribution, with volatility, skewness, and kurtosis varying over time. In such a context, modeling several returns simultaneously, using the multivariate extension of this distribution, would be extremely cumbersome. Subsequently, we use copula functions to join these complicated univariate distributions. This approach leads to a multivariate distribution which fits the data well, without involving time-consuming estimations. Finally, we describe how the dependency parameter can be rendered conditional and we propose alternative specifications to model the dynamics of the dependency parameter. On one hand, the dependency parameter is allowed to depend on the position of past realizations of margins in the unit square. This model provides a semi-parametric description of the dependency parameter. The dependency between European markets is found to increase significantly subsequently to movements in the same direction, either a crash or a boom. On the other hand, the dynamics of the dependency structure is captured through a time-varying correlation model and a Markov-switching model. Empirical evidence reveals that the dependency between European market pairs is time varying and has significantly increased between 1980 and 1999, contrary to the dependency between the U.S. and European markets. This methodology may also be used in several contexts, such as conditional asset allocation or Value-at-Risk computation in a non-normal framework. To implement asset allocation in such a context, it is necessary to compute expressions involving multiple integrals of the joint distribution, while VaR applications require computing the probability that a portfolio exceeds a given threshold. Once the marginal models are known, such computations can be performed rather easily using numerical integration.