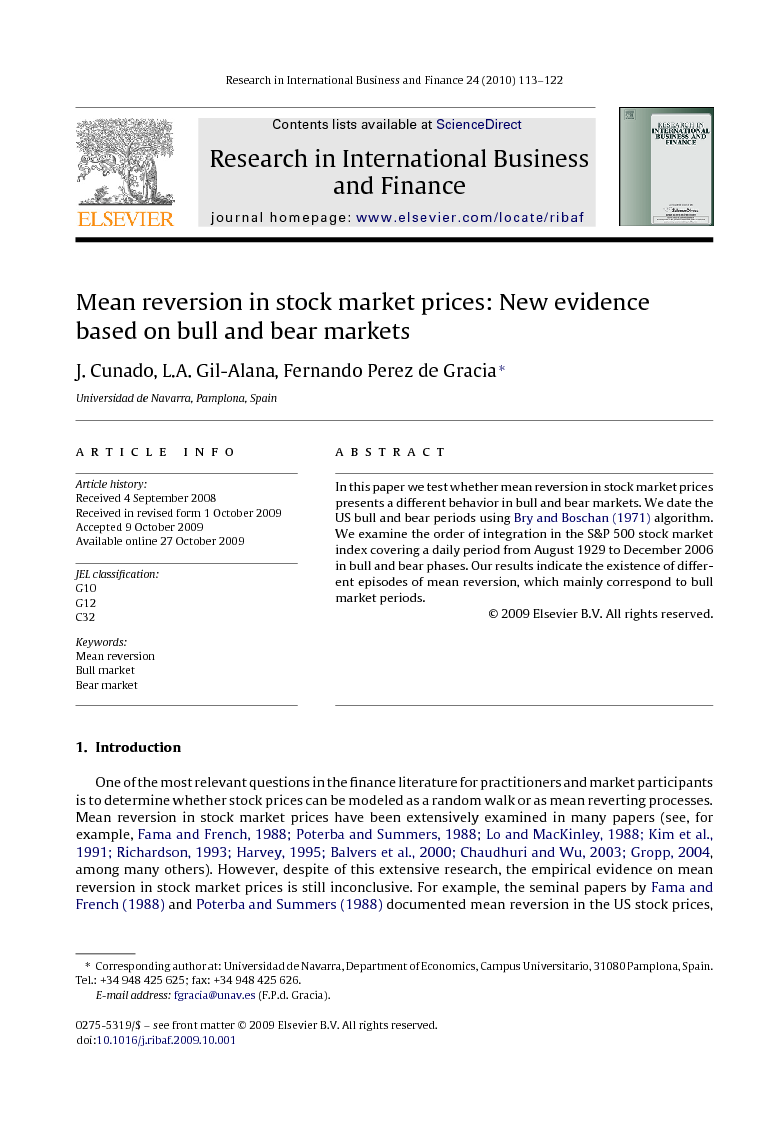 In this paper we test whether mean reversion in stock market prices presents a different behavior in bull and bear markets. We date the US bull and bear periods using Bry and Boschan (1971) algorithm. We examine the order of integration in the S&P 500 stock market index covering a daily period from August 1929 to December 2006 in bull and bear phases. Our results indicate the existence of different episodes of mean reversion, which mainly correspond to bull market periods.

One of the most relevant questions in the finance literature for practitioners and market participants is to determine whether stock prices can be modeled as a random walk or as mean reverting processes. Mean reversion in stock market prices have been extensively examined in many papers (see, for example, Fama and French, 1988, Poterba and Summers, 1988, Lo and MacKinley, 1988, Kim et al., 1991, Richardson, 1993, Harvey, 1995, Balvers et al., 2000, Chaudhuri and Wu, 2003 and Gropp, 2004, among many others). However, despite of this extensive research, the empirical evidence on mean reversion in stock market prices is still inconclusive. For example, the seminal papers by Fama and French (1988) and Poterba and Summers (1988) documented mean reversion in the US stock prices, while other authors such as Lo and MacKinley (1988), Richardson and Stock (1989), and Balvers et al. (2000) presented evidence against it. Most of these previous papers on mean reversion in the stock market prices focus on the univariate properties of the series, using traditional unit root tests such as the Augmented Dickey and Fuller (ADF, Dickey and Fuller, 1979 and Dickey and Fuller, 1981), Phillips and Perron (PP, Phillips and Perron, 1988), Kwiatkowski et al. (KPSS, 1992) or some of the recent developments based on these procedures (Elliott et al., 1996 and Ng and Perron, 2001, etc.). Other recent papers on stock prices mean reversion use unit root tests, which allow for one or more structural breaks (see, for example, Chaudhuri and Wu, 2003, Phengpis, 2006 and Narayan and Smyth, 2007). Further studies have also examined mean reversion in stock prices using panel data tests (Zhu, 1998, Balvers et al., 2000, Chaudhuri and Wu, 2004, Narayan and Smyth, 2005 and Choi and Chue, 2007), and another line of research is based on the possibility of non-linear behavior in the mean reverting process (Manzan, 2004, Boswijk et al., 2007, Lim and Liew, 2007 and Bali et al., 2008). Finally, long memory techniques have also been applied to analyze mean reversion in stock prices. In particular, fractional integration has become an alternative appealing approach for testing mean reversion since it includes the two standard cases of stationarity I(0) and non-stationarity I(1) as particular cases of interest. Examples of applications using these techniques are the papers of Lo (1991), Lobato and Savin (1998), Sadique and Silvapulle (2001), Caporale and Gil-Alana (2004), Assaf (2006), among many others. 1 In contrast to the existing financial literature on mean reversion, this paper re-examines this issue in the US stock market using long memory techniques, and taking into account stock market phases over the period from 1929 to 2006. According to DeLong (1992) and Siegel (1998) stock prices deviate from its fundamentals in the short run, while in the long run stock prices tend to approach to its fundamental value. In this context, stock markets typically present periods of stock prices increases and decreases about the long-term trend. Periods of stock prices increase are called bull markets and periods of stock prices decline are called bear markets. In order to locate bull and bear stock market phases, we will employ the turning point algorithm developed by Bry and Boschan (1971). The Bry and Boschan's algorithm lets us identify troughs and peaks in stock indexes and, thus, we can locate the starting and finishing points of the bull and bear markets. More specifically, the novel feature of our work is to analyze whether stock market prices behave differently in US bull and bear periods. Thus, instead of studying mean reversion in some historical crashes or remarkable sub-periods, we analyze the issue over a long period that covers from 1929 to 2006, examining different subsamples according to the different phases. Only a few papers take into account different subsamples in order to study mean reversion. Kim et al. (1991) compare the mean reversion behavior before and after World War II. Their results support the view that mean reversion is entirely a pre-war phenomenon. Other papers have also examined mean reversion using endogenous structural break tests (Chaudhuri and Wu, 2003, Phengpis, 2006 and Narayan and Smyth, 2007). Further, Hillebrand (2003) using the period of the bull market proposed by the report of the Brady-Commission, analyzes the crash of 1987. His results suggest that in 1987 mean reversion was lower than during the previous bull markets (i.e., 1982–1987). Our results point out to the existence of different episodes of mean reversion in the S&P 500 stock market index, which mainly correspond to bull market periods. The remainder of the paper is organized as follows. Section 2 describes the statistical approach employed in the paper. In Section 3, we apply the proposed methodology to the data and report the empirical results. Finally, Section 4 contains some concluding comments.