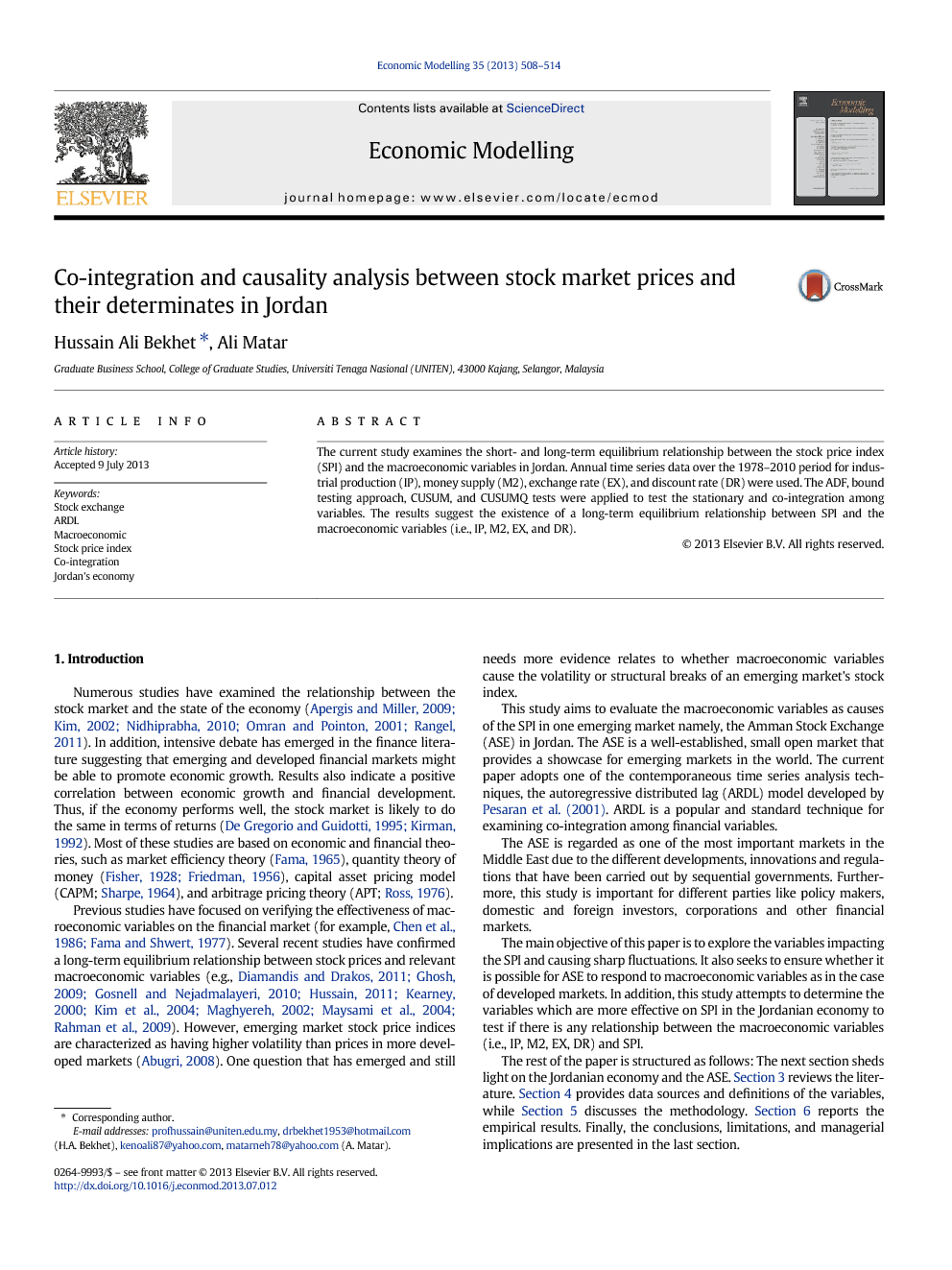 The current study examines the short- and long-term equilibrium relationship between the stock price index (SPI) and the macroeconomic variables in Jordan. Annual time series data over the 1978–2010 period for industrial production (IP), money supply (M2), exchange rate (EX), and discount rate (DR) were used. The ADF, bound testing approach, CUSUM, and CUSUMQ tests were applied to test the stationary and co-integration among variables. The results suggest the existence of a long-term equilibrium relationship between SPI and the macroeconomic variables (i.e., IP, M2, EX, and DR).

Numerous studies have examined the relationship between the stock market and the state of the economy (Apergis and Miller, 2009, Kim, 2002, Nidhiprabha, 2010, Omran and Pointon, 2001 and Rangel, 2011). In addition, intensive debate has emerged in the finance literature suggesting that emerging and developed financial markets might be able to promote economic growth. Results also indicate a positive correlation between economic growth and financial development. Thus, if the economy performs well, the stock market is likely to do the same in terms of returns (De Gregorio and Guidotti, 1995 and Kirman, 1992). Most of these studies are based on economic and financial theories, such as market efficiency theory (Fama, 1965), quantity theory of money (Fisher, 1928 and Friedman, 1956), capital asset pricing model (CAPM; Sharpe, 1964), and arbitrage pricing theory (APT; Ross, 1976). Previous studies have focused on verifying the effectiveness of macroeconomic variables on the financial market (for example, Chen et al., 1986 and Fama and Schwert, 1977). Several recent studies have confirmed a long-term equilibrium relationship between stock prices and relevant macroeconomic variables (e.g., Diamandis and Drakos, 2011, Ghosh, 2009, Gosnell and Nejadmalayeri, 2010, Hussain, 2011, Kearney, 2000, Kim et al., 2004, Maghyereh, 2002, Maysami et al., 2004 and Rahman et al., 2009). However, emerging market stock price indices are characterized as having higher volatility than prices in more developed markets (Abugri, 2008). One question that has emerged and still needs more evidence relates to whether macroeconomic variables cause the volatility or structural breaks of an emerging market's stock index. This study aims to evaluate the macroeconomic variables as causes of the SPI in one emerging market namely, the Amman Stock Exchange (ASE) in Jordan. The ASE is a well-established, small open market that provides a showcase for emerging markets in the world. The current paper adopts one of the contemporaneous time series analysis techniques, the autoregressive distributed lag (ARDL) model developed by Pesaran et al. (2001). ARDL is a popular and standard technique for examining co-integration among financial variables. The ASE is regarded as one of the most important markets in the Middle East due to the different developments, innovations and regulations that have been carried out by sequential governments. Furthermore, this study is important for different parties like policy makers, domestic and foreign investors, corporations and other financial markets. The main objective of this paper is to explore the variables impacting the SPI and causing sharp fluctuations. It also seeks to ensure whether it is possible for ASE to respond to macroeconomic variables as in the case of developed markets. In addition, this study attempts to determine the variables which are more effective on SPI in the Jordanian economy to test if there is any relationship between the macroeconomic variables (i.e., IP, M2, EX, DR) and SPI. The rest of the paper is structured as follows: The next section sheds light on the Jordanian economy and the ASE. Section 3 reviews the literature. Section 4 provides data sources and definitions of the variables, while Section 5 discusses the methodology. Section 6 reports the empirical results. Finally, the conclusions, limitations, and managerial implications are presented in the last section.