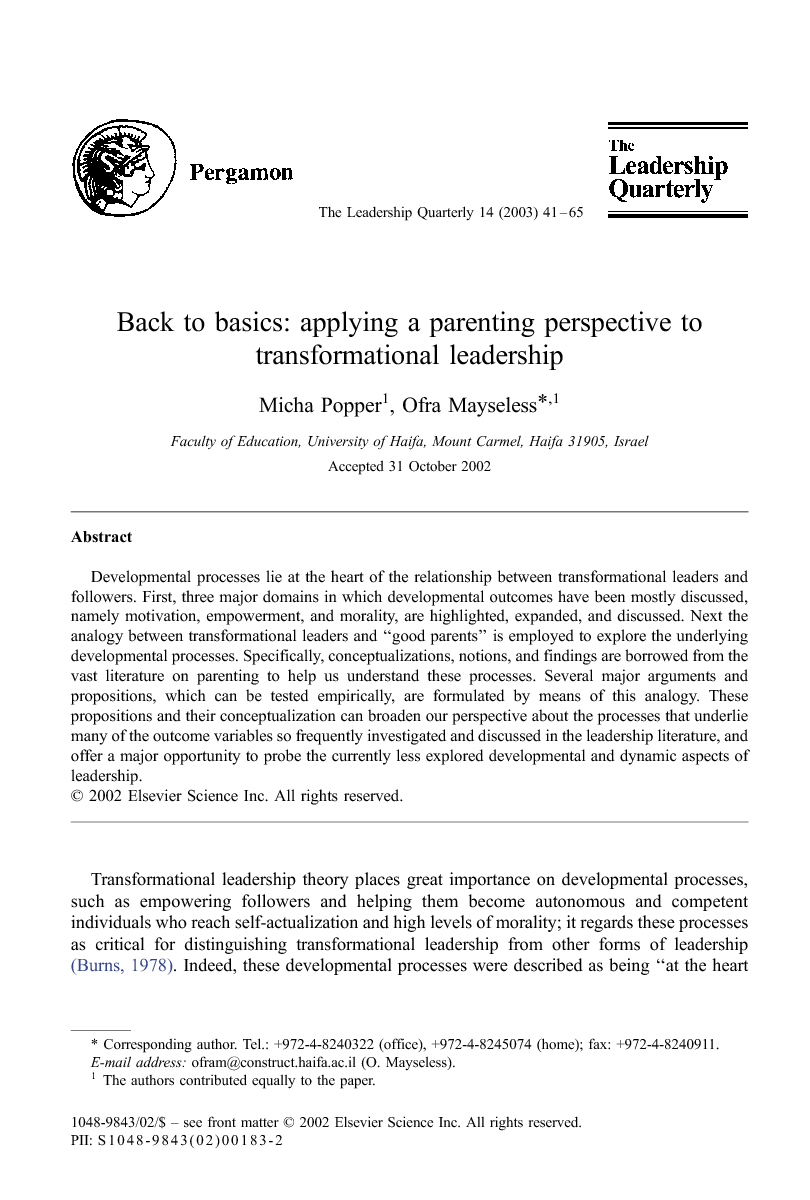 Developmental processes lie at the heart of the relationship between transformational leaders and followers. First, three major domains in which developmental outcomes have been mostly discussed, namely motivation, empowerment, and morality, are highlighted, expanded, and discussed. Next the analogy between transformational leaders and “good parents” is employed to explore the underlying developmental processes. Specifically, conceptualizations, notions, and findings are borrowed from the vast literature on parenting to help us understand these processes. Several major arguments and propositions, which can be tested empirically, are formulated by means of this analogy. These propositions and their conceptualization can broaden our perspective about the processes that underlie many of the outcome variables so frequently investigated and discussed in the leadership literature, and offer a major opportunity to probe the currently less explored developmental and dynamic aspects of leadership. Transformational leadership theory places great importance on developmental processes, such as empowering followers and helping them become autonomous and competent individuals who reach self-actualization and high levels of morality; it regards these processes as critical for distinguishing transformational leadership from other forms of leadership (Burns, 1978). Indeed, these developmental processes were described as being “at the heart of transformational leadership theory” (see Bass, 1997, p. 131). Yet, surprisingly, only few attempts have been made to unravel their nature and practice (e.g., Burns, 1978 and Shamir et al., 1993) though quite a number of researchers recently have addressed issues of process in leadership research (e.g., Howell & Costley, 2001, Jacobson & House, 2001, Ropo & Hunt, 1999, Ropo et al., 1997 and Yukl, 1999). For example, Jacobson and House (2001) presented a process model describing six stages in the interactions between followers and charismatic leaders. They start with identification and move through arousal and commitment to disenchantment, depersonalization, and alienation. Similarly, Ropo et al. (1997) discussed theoretical and methodological issues relating to dynamic processes in human organizations, and Ropo and Hunt (1999) examined such processes by highlighting linkages between leadership, organizational change, and managerial work. Pertinent to the developmental processes between leaders and followers, Shamir et al. (1993) suggested a self-concept motivational theory to explain the process by which charismatic leader behaviors cause transformational effects on followers. They argued that charismatic leaders motivate followers by implicating the followers' self-concepts, for example, by increasing the intrinsic valence of effort and goal accomplishment, and by creating personal commitment. This article seeks to extend these efforts beyond the question of harnessing followers' motivation by means of symbolic interaction (e.g., Stryker, 1980) as suggested by Shamir et al. (1993). We aim at providing a conceptual framework for studying and understanding developmental psychological processes involved in transformational leadership by means of the analogy of the leader as a parent. Leader–led relationships are analogous to parent–children dynamics in many respects. Leaders, like parents, are figures whose role includes guiding, directing, taking charge, and taking care of others less powerful than they and whose fate is highly dependent on them. The extent of the dependence of children on parents, or of followers on leaders, renders the influence of the latter highly important. Although the metaphor of the leader as a father was earlier introduced by Freud in the 1930s (Freud, 1939, pp. 109–111), it has never been further developed and elaborated. This analogy is the point of departure of this article. We assume that leaders with whom followers form emotional relationships function in many respects like parents. Just as parents protect, guide, and teach children, helping them to grow into functioning and autonomous adults, so do transformational leaders in their relationships with their followers. We can benefit from this analogy by studying the dynamics involved in good parenting and by applying the insight gained from such consideration to understand the developmental aspects of good leaders (i.e., transformational leaders), namely to understand how leaders help their followers grow and develop as people. The main objectives of this article are: (1) to highlight and specify the main domains in which developmental processes in the leader–led relationships are expected; (2) to elaborate on the analogy between leaders and parents, and to illustrate its pertinence and validity; (3) to employ this analogy to gain insights from parenthood in order to highlight the developmental aspects of good leadership, specifically transformational leadership; and (4) to suggest conceptualizations and possible research avenues derived from the analogy between transformational leaders and good parents.