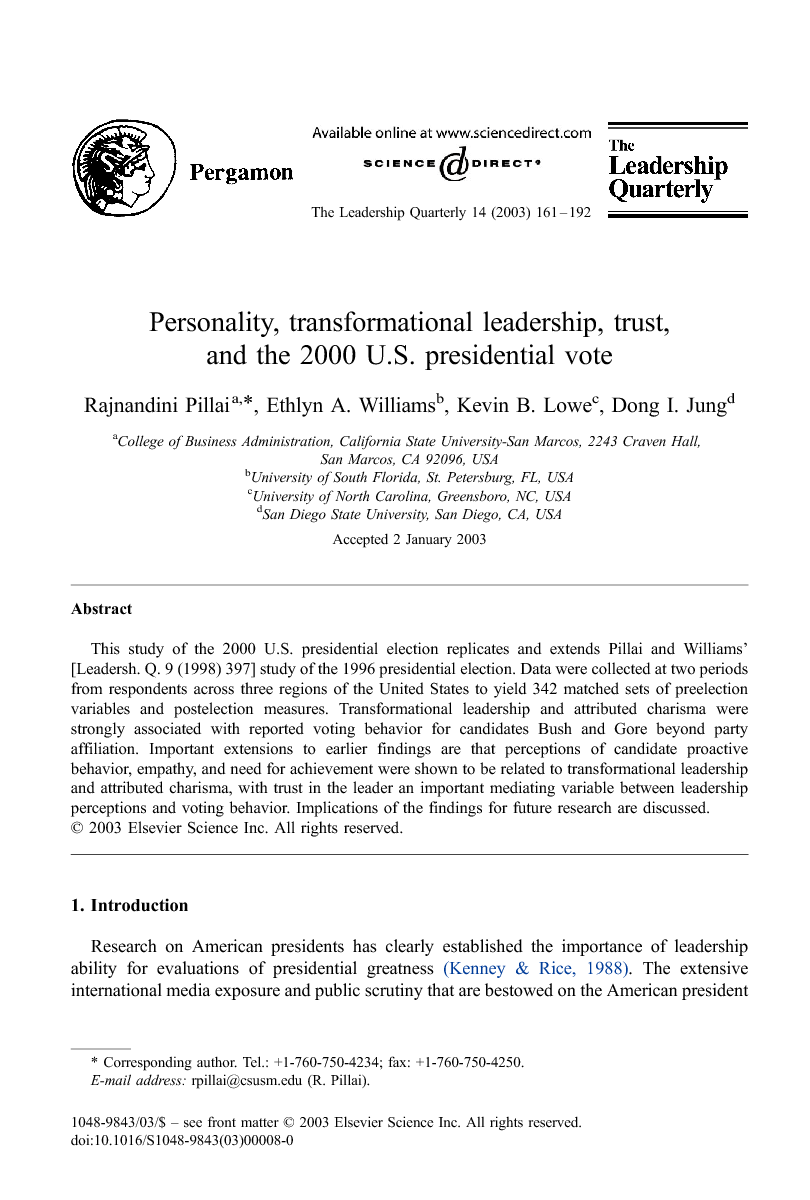 This study of the 2000 U.S. presidential election replicates and extends Pillai and Williams' [Leadersh. Q. 9 (1998) 397] study of the 1996 presidential election. Data were collected at two periods from respondents across three regions of the United States to yield 342 matched sets of preelection variables and postelection measures. Transformational leadership and attributed charisma were strongly associated with reported voting behavior for candidates Bush and Gore beyond party affiliation. Important extensions to earlier findings are that perceptions of candidate proactive behavior, empathy, and need for achievement were shown to be related to transformational leadership and attributed charisma, with trust in the leader an important mediating variable between leadership perceptions and voting behavior. Implications of the findings for future research are discussed.

Research on American presidents has clearly established the importance of leadership ability for evaluations of presidential greatness (Kenney & Rice, 1988). The extensive international media exposure and public scrutiny that are bestowed on the American president make leadership qualities critical determinants of effectiveness evaluations (Foti, Fraser, & Lord, 1982). Increasing national and international complexity has correspondingly increased the role of the government and expanded the public responsibility of those, such as the president, in positions of visible discretionary executive power and authority (Renshon, 1998). Presidential personality and character are believed to hold the keys to performance in the office and have been scrutinized by voters during presidential campaigns in the past (House, Spangler, & Wokye, 1991). The evolving challenges of U.S. presidential leadership in the 21st century, punctuated by the tragic events of September 11, 2001, suggest that successful presidential leadership will be defined more by transformational and charismatic appeals that galvanize key constituencies worldwide around a sustainable vision than by concentrated regiocentric displays of power. Thus, evaluations of candidates' leadership ability and character are likely to play an ever increasingly important role in determining voting behavior in future elections. However, systematic examination of the influence of leadership on voting preference and choice has lagged behind other issues such as the state of the economy and party affiliation (Miller, Wattenberg, & Malanchuk, 1986). As we explain in the following paragraphs, the present study is an attempt not only to replicate an earlier study by Pillai and Williams (1998) but also to add value by extending some preliminary findings that suggest that leadership perceptions have a strong association with reported voting behavior. Pillai and Williams (1998) investigated the impact of voters' perceptions of attributed charisma and transformational leadership of the Democratic (incumbent President Bill Clinton) and Republican (then Senator Bob Dole) candidates for the Presidency of the United States in the 1996 elections. Their study showed that leadership perceptions were positively associated with both intent to vote and actual voting behavior, after accounting for the impact of traditional variables such as party affiliation, during the 1996 U.S. presidential election. Although showing that holistic leadership evaluations are an important influence on voting behavior, their study provided no empirical insights into the antecedent conditions, such as evaluations of personality characteristics, which drive these leadership perceptions and the consequences of such perceptions for the vote. Analysis of the trait inventories of presidential candidates from the National Election Studies data based from 1980 to the 1992 elections reveal that impressions of candidate character appear to play an important role in American electoral politics even after traditional predictors of voting, such as party identification, are held constant (Klein, 1996). The primary purpose of this study is to extend the scope of Pillai and Williams' (1998) study in the context of the 2000 presidential elections and to include the interplay of proactive behavior, need for achievement, emotional empathy, transformational leadership, charisma, and trust with actual voting behavior. We believe that a more comprehensive model, incorporating both antecedent and mediating variables (to the relationship between leadership perceptions and voting behavior) will shed new light on voter decision making arising from evaluations of candidate leadership traits, enhancing our understanding of voter decision making. A second important purpose of this study is to replicate the study of Pillai and Williams in the context of the 2000 presidential elections with different presidential candidates, namely Vice President Al Gore and then Governor George W. Bush. Although replication studies are important for understanding the robustness of a phenomenon, their presence is regrettably uncommon in the leadership literature, a plight shared by most of the organizational literature Hubbard & Vetter, 1996 and Hunter, 2001. Past research has shown that political leadership perceptions play an important role in voter preference and choice (e.g., Maurer et al., 1993 and Shamir, 1994). Using leadership categorization theory, Maurer et al. (1993) examined the match between voters' perceptions of a candidate's traits and their prototype of an effective leader. In the context of the 1988 U.S. presidential elections, they found that the higher the prototypicality of a trait with regard to an effective political leader prototype, the stronger the relationship between perceptions of the candidate in terms of the trait, and whether the respondent voted for the leader. Shamir (1994) found that the level of perceived charismatic leadership and ideological position influenced voting preferences of Israeli voters during the 1992 elections for Israel's prime minister. In a study using both experimental and national election data, Rapoport, Metcalf, and Hartman (1989) found that voters were likely to make inferences about candidates from personality traits to campaign issues and from campaign issues to personality traits; however, inferences from issues to traits were much stronger and were based on implicit theories of politics and human nature. A number of scholars have devoted their attention to assessing the factors that have contributed to outstanding leadership among U.S. presidents and found that presidential charisma and motive profile were related to electoral success (e.g., House et al., 1991, Simonton, 1988 and Winter, 1987). Thus, leadership and individual characteristics appear to play an important role in the post hoc evaluation of presidential greatness and leadership potential; likewise, perceptions of candidate personality may play an important role in determining voter preferences. Drawing on past research, we develop the model shown in Fig. 1 with dotted lines indicating proposed extensions to the relationships tested by Pillai and Williams (1998). We first examine the relationship of perceptions of presidential candidate proactivity, need for achievement, and emotional empathy to transformational leadership and attributed charisma, and in turn to voting preference and choice (Extension 1, Fig. 1). Next, we test the mediating role of trust in the relationship between transformational leadership and attributed charisma and actual voting behavior in an attempt to better explain how leadership evaluations affect voting behavior (Extension 2, Fig. 1). Finally, we examine the role of leadership in the relationship between individual characteristics (personality) and trust (Extension 3, Fig. 1). A review of the literature and rationale for including each of the variables in our study is discussed in the following section.