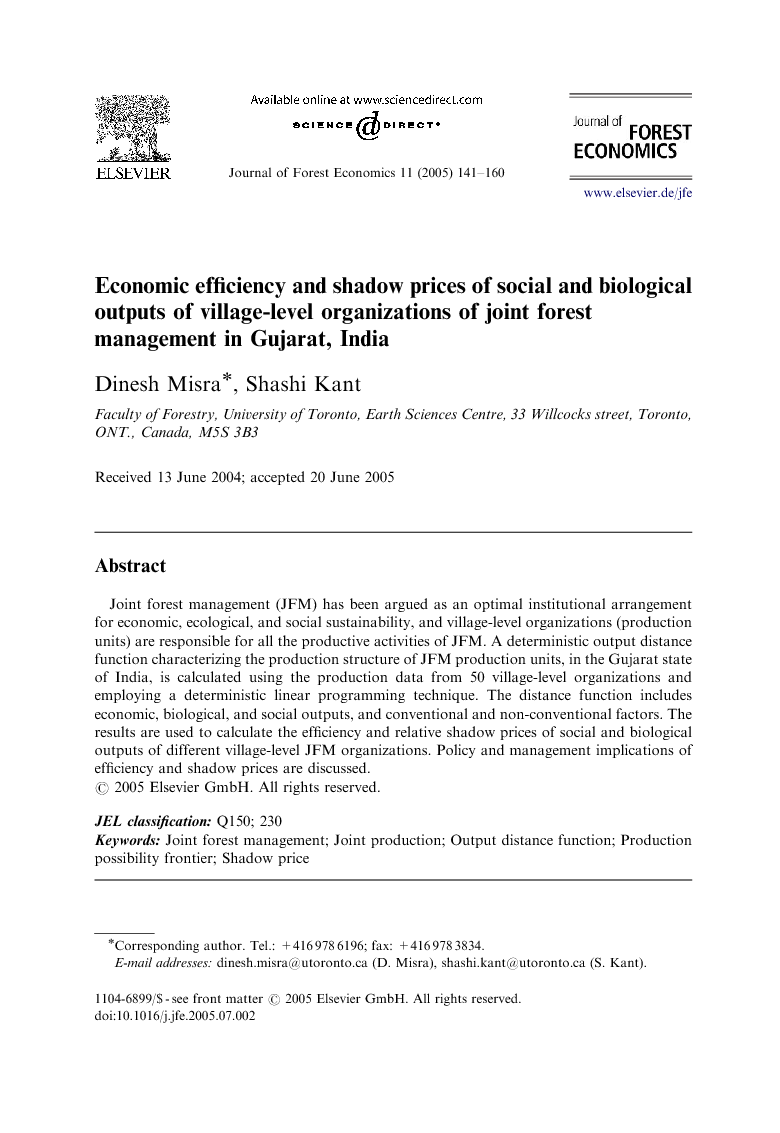 Joint forest management (JFM) has been argued as an optimal institutional arrangement for economic, ecological, and social sustainability, and village-level organizations (production units) are responsible for all the productive activities of JFM. A deterministic output distance function characterizing the production structure of JFM production units, in the Gujarat state of India, is calculated using the production data from 50 village-level organizations and employing a deterministic linear programming technique. The distance function includes economic, biological, and social outputs, and conventional and non-conventional factors. The results are used to calculate the efficiency and relative shadow prices of social and biological outputs of different village-level JFM organizations. Policy and management implications of efficiency and shadow prices are discussed.

In the last decade, sustainable forest management (SFM) has emerged as a dominant paradigm of forest management. The main feature of SFM paradigm is the recognition of biological (ecological) and social values of forests, in addition to its economic values. Joint forest management (JFM) or co-management forest regime has emerged the most promising approach to address the issues associated with SFM. As a result, it has attracted the attention of diverse people such as research scholars, forest managers, bureaucrats, and the donors. The focus of resource economists has been on the conventional cost–benefit analysis of JFM (Hill and Shields, 1998; Datta and Varalakshmi, 1999; Ligon and Narain, 1999), theoretical economic models of JFM (Kant and Nautiyal, 1994; Ligon and Narain, 1999), and discussion of property rights arrangement in the context of JFM (Kant, 1996; Zhang et al., 2000; Kant and Berry, 2001).1 However, no attempt has been made to quantify the economic efficiency of the production units (organizations) of JFM, and in the absence of such analysis it is impossible to design production-unit-level interventions. Most of the economic research dealing with economic efficiency of production units is based on a production function which incorporates capital and labor as the factor inputs that are occasionally supplemented by land, materials or energy as factor inputs. Only a few economists, such as Leibenstein, 1966 and Leibenstein, 1982 and Mefford (1986), have argued that such a production function is not fully specified. Leibenstein's theory of X-efficiency makes the case that effectiveness of use of resources (factors) is as important as allocation of resources (factors) in a production process. Firm's management functions – the organization of the work process, motivation and supervision of employees, and the monitoring and controlling of the operations – make up X-efficiency, and a difference in how well these management functions are performed should result in substantial differences in the amount of output given the same quantities of capital, labor, energy, and land. Mefford (1986) included production unit's management, measured as a performance ranking of each plant compared to all other plants, as a factor in production function and concluded that the omission of management as a factor will leave a fairly sizable portion of output or productivity unexplained as well as biasing the coefficients of the included variables. Unfortunately, even after such outcomes, economic efficiency studies of production units rarely include management-related variables in their studies. In the case of village-level organizations and production processes of JFM, management-related factors seem even more critical than in the case of conventional economic firms. The second shortcoming of conventional productivity and economic efficiency analysis is that they account for only marketed outputs and factors. Environmental economists have extended productivity and efficiency analysis to include “economic bads”, pollutants, and have used three techniques for analysis – index number approach (Pittman, 1983; Repetto et al., 1996), non-parametric data envelopment analysis (Fare et al., 1989; Tyteca, 1997), and output and input distance functions (Fare et al., 1993; Hailu and Veeman, 2000). However, not only “economic bads” but also many economic goods are non-market outputs. In the context of SFM, social and ecological outputs, which are normally economic goods, are not traded in the market. Similarly, many social, cultural, and other factors which contribute to the management process of the village-level organizations are not traded in the market. Hence, uneven treatment of marketed outputs and factors compared to non-marketed outputs and factors will lead to distortions in the assessment of economic performance and policy recommendations. In this paper, we use parametric output distance function to provide a framework for a more complete representation of production technology in the JFM sector of Gujarat state of India, from which efficiency measures of different village-level organizations can be generated. Economic, social, and biological outputs, conventional factors (land and labor), and non-conventional factors associated with the management aspect of an organization are included in the analysis. The outcomes are used to calculate production efficiency and shadow prices of social and biological outputs for each JFM production unit. The information on efficiency and relative shadow prices is used for some policy implications for JFM. In the next section, we provide background of JFM in India, and discuss main features of village-level organizations and production process associated with JFM. In the following section, theoretical concepts of output distance function are described followed by a linear programming approach to deterministic output distance function. Lastly, the analysis of production inefficiencies and policy inferences is described and significance of the research is highlighted.

The estimated output distance function, and the analyses of output efficiency and shadow prices of three outputs have provided some insights into the production structure of JFM. First, due to different preferences of different village-level organizations for the three JFM outputs, JFM planning and management strategies will require village-level organization-specific interventions from forest managers, representatives of local communities and NGOs. Some general inferences can be drawn at the aggregate level, although these should be used with caution. Second, the mean efficiency of JFM production was 91% leaving a scope of improvement by as much as 9%. In addition, the minimum efficiency was about 50%, and hence, there is very good scope to improve the aggregate production efficiency of JFM production units in Gujarat. Third, the production efficiency scores of the JFM villages underline the point that a higher production may not necessarily indicate greater production efficiency. Fourth, the wide variations in the shadow prices of the three outputs across villages suggest that no sweeping generalizations can be made about the community preferences for social, economic, and environmental outputs in view of the wide differences in the social, economic, and cultural conditions of communities. This study is the first study on production efficiency analysis of JFM production units. Hence, the results may be only indicative or exploratory results and not confirmatory results. However, due to the similarity of joint forest regimes in other states of India and also similarity with other co-management regime in other most developing countries, this approach has the potential to set a benchmark for studies on production efficiency analysis of collaborative forest regimes all over the world. Finally, the study is limited in scope due to cross-sectional production analysis of JFM, and we are unable to analyze technical and/or managerial changes/improvements in the JFM production units over time. The importance of time-series analysis of JFM production process and/or inter-temporal allocation of resources in forest management is beyond doubt, but non-availability of time-series data, specifically of non-conventional factors, will always pose a challenge to researchers to conduct such analysis. We suggest that forest departments, policy makers, researchers, and funding agencies should initiate joint programs to collect time-series data from JFM production units that would facilitate/motivate the interested researchers to conduct temporal analysis of JFM production process.