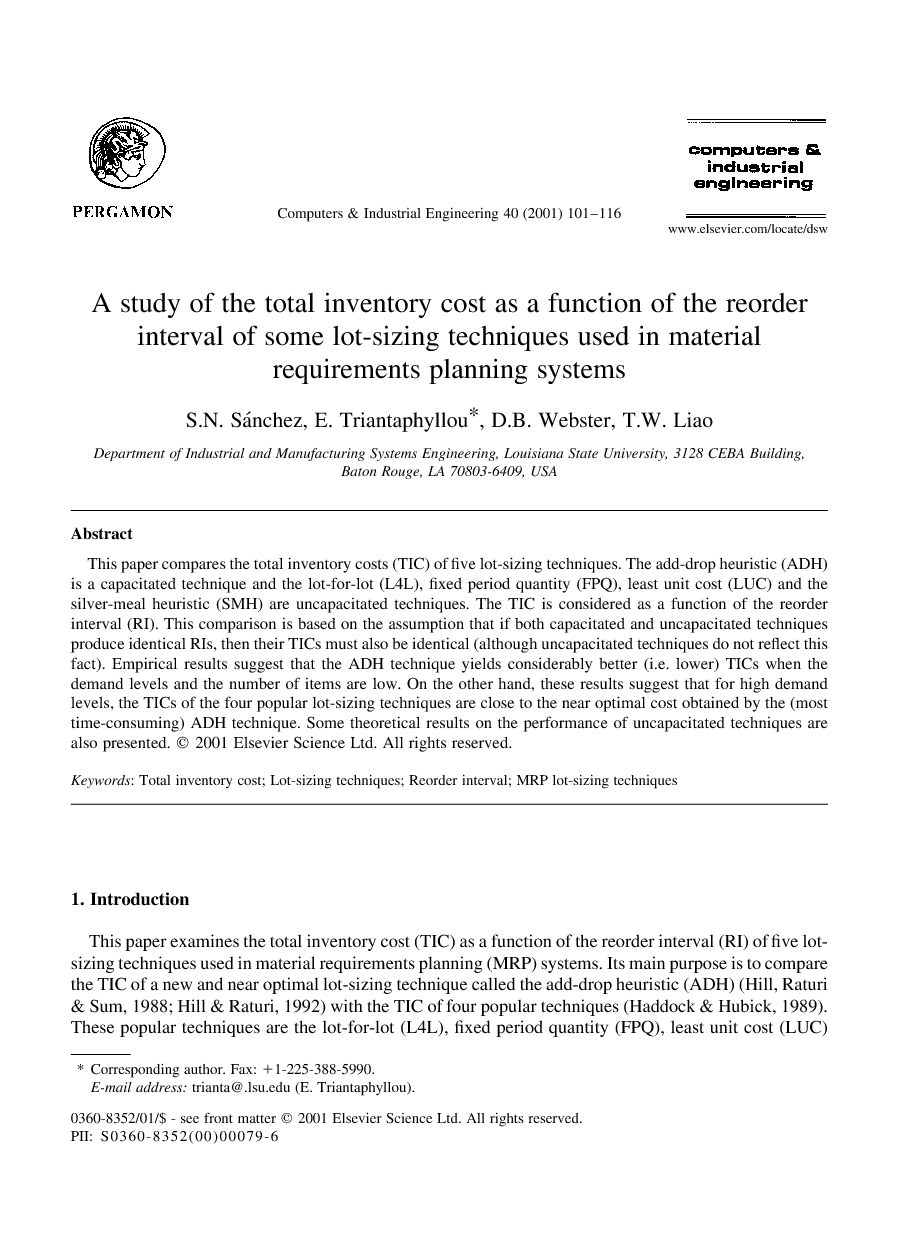 This paper examines the total inventory cost (TIC) as a function of the reorder interval (RI) of five lot-sizing techniques used in material requirements planning (MRP) systems. Its main purpose is to compare the TIC of a new and near optimal lot-sizing technique called the add-drop heuristic (ADH) (Hill et al.,1988 and Hill and Raturi, 1992) with the TIC of four popular techniques (Haddock & Hubick, 1989). These popular techniques are the lot-for-lot (L4L), fixed period quantity (FPQ), least unit cost (LUC) and the silver-meal heuristic (SMH). MRP lot-sizing techniques are inventory control tools that allow users to make decisions on the timing and quantities of inventory parts (Orliky, 1975). Therefore, knowing the performance of these techniques is very important in manufacturing control environments because it allows a user to identify the conditions under which new techniques, such as the ADH, are more advantageous over other techniques. Traditionally, MRP lot-sizing techniques are benchmarked by comparing the TICs and computational times they produce to solve a given inventory problem (Berry, 1972 and Lee et al., 1983). Often, the TIC is defined by the sum of the cost of placing orders (i.e. the setup cost) plus the cost of carrying unused inventory from one period to subsequent periods (i.e. the holding cost) (Solomon, 1991). When lot-sizing techniques only use the setup and holding costs, they are referred to as uncapacitated techniques because they do not include any type of constraints in the available resources (i.e. production capacity is unlimited) ( Solomon, 1991). The L4L, FPQ, LUC, and SMH are examples of uncapacitated techniques. On the other hand, lot-sizing techniques are referred to as capacitated techniques when in addition to the setup and holding costs, the cost structure also considers some constraints on the available resources (i.e. the capacity is finite) ( Solomon, 1991). The ADH technique is a capacitated technique, which satisfies a production capacity constraint in each period of the planning horizon. A methodological problem exists when one wishes to compare the TIC of these five lot-sizing techniques because they belong to two different types of approaches and hence serve two different purposes. That is, a direct comparison of these techniques based on the TIC is not possible and thus a common ground must be found if these techniques are to be compared. It can be observed that the RI (i.e. a time performance measure) is a common performance measure that can be used to compare the five lot-sizing techniques mentioned above. The relevance of RI as a performance measure is illustrated by considering the following hypothetical scenario. Let RIu(A) and RIc(A) be the RIs of item A when it is computed under uncapacitated and capacitated approaches, respectively. Also, let TICu(A) and TICc(A) be the total inventory costs associated with these two RIs, respectively. It can be observed that if RIu(A)=RIc(A), then it can be assumed that both approaches perform identically, and therefore that the corresponding total costs must also be equal. That is, TICu(A)=TICc(A). The goal of this paper is to analyze the performance of the five lot-sizing techniques mentioned above by comparing the TICu(A) and TICc(A) values as functions of the RI. The empirical results reported in this study suggest that the ADH technique delivered considerably better TIC solutions (i.e. lower costs) for low demand levels and for few numbers of items. However, these results also suggest that for high demand levels, uncapacitated techniques delivered TIC costs that were very close to the near optimal cost obtained by the ADH technique. This paper is organized as follows. The notations used in this paper are given in the nomenclature section. Section 2 introduces the derivations of both the TIC and RI values of the L4L, FPQ, LUC, SMH and ADH techniques. Section 3 states the assumptions needed in order to perform the comparisons of the five lot-sizing techniques. Section 4 presents a numerical example of the computation of the TIC by using one iteration of the ADH heuristic. Then, Section 5 presents the computational results on the TICs. Finally, this paper ends with some concluding remarks and a summary section.

This study benchmarked the following five lot-sizing techniques: L4L, FPQ, LUC, SMH and ADH. Its goal was to investigate the behavior of the TIC of these techniques when this cost is a function of the RI. An experimental study was set up in order to investigate this cost behavior. The main conclusions of this investigation are as follows: (1) For high demand levels, the uncapacitated lot-sizing techniques (i.e. L4L, FPQ, LUC, and SMH) delivered TICs which are comparable to the cost of the capacitated ADH technique. (2) Moreover, as demand was increased, the TICs of all techniques converged into the TIC of the L4L technique. Thus, suggesting that for high demand levels, the L4L technique is a preferred technique mainly because of its mathematical simplicity. (3) The ADH lot-sizing technique is recommended only for low demand levels and for small numbers of items in order to ensure acceptable CPU times. The main contributions of this investigation are twofold. First, the results in this paper complement the previous research of the ADH lot-sizing technique (Hill & Raturi, 1992) by comparing its performance against the performance of four popular (Haddock & Hubick, 1989) lot-sizing techniques. Previous comparisons of this technique against the unpopular (Haddock & Hubick, 1989) branch-and-bound optimal method showed a deviation of only 0.32% (i.e. <1%) from optimality for different problem sizes. However, these results are the first demonstration that for problems of large size the ADH (which is a near optimal) technique may behave identically with popular lot-sizing techniques. Furthermore, these results represent the antithesis of the assumptions in McKnew, Saydam and Coleman (1991), which state that simple lot-sizing techniques are poor performers with problems of reasonable size. The second contribution corresponds to the analytical derivations of the conditions under which the uncapacitated techniques performed identically. These derivations complement the lower convergence point (LCP) in Karni (1986). The derivations in Karni (1986) also proved that some uncapacitated techniques (e.g. EOQ and UOQ) performed identically with the L4L for small RIs T, a parameter which is determined until the technique has been executed and the schedule is known. The analytical derivations in this study did not require the prior knowledge of such schedule, thus presenting an immediate advantage and a generalization over the derivations reported in Karni (1986).