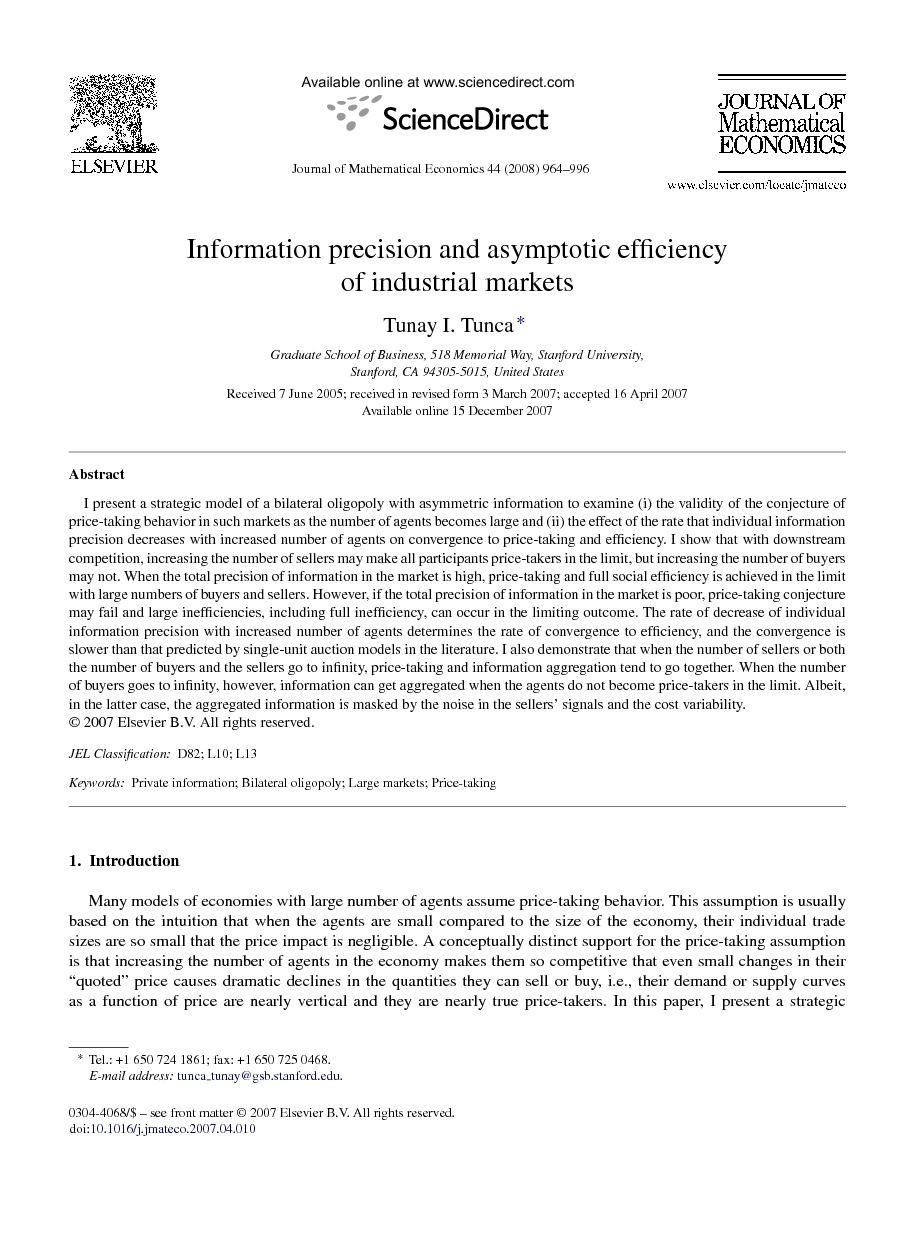 In this paper, I explored the role of information precision on price-taking and efficiency of large industrial markets with downstream competition. I stated three claims and demonstrated support for them using a model of an industrial market with private information. First, whether the agents become price-takers in the limit depends on how the total precision of the information in the economy changes with increased number of agents. Second, in industrial markets with downstream competition, whether the agents become price-takers or not depends on the type of the agents (buyers or sellers) whose number is getting large. In particular, if the number of buyers becomes large, the interdependence of the utilities of the buyers can prevent the agents from being price-takers even when the number of buyers approaches infinity. Third, I claim that, with information effects, increasing the number of agents can result in agents’ moving further away from price-taking. In fact, I demonstrated that this effect can be extremely severe to make even the smallest quantities have a very large impact on the market price and this can affect the market performance dramatically. Our results also support the claim that in multi-unit double-auctions with common values and correlated signals, the rate of convergence to efficiency depends on the precision of the agents’ information and can be significantly slower than that is predicted by the studies on the single unit double auctions with private values. Finally, our results also demonstrated that although information aggregation and limiting price-taking behavior tend to occur together, there can also be exceptions, particularly when the number of buyers go to infinity and the number of sellers stay constant. However, in such cases, the aggregated information is masked by the noise in the sellers’ signals and the cost realization. In my analysis, I focused on symmetric linear equilibria and normal distributions. Further, I assumed a linear end consumer demand curve. These assumptions are necessary for tractability and are common in analysis of markets with information asymmetry with agents having correlated signals and multi-unit demands.11 The in-depth analysis of such markets under private information is by and large intractable under more general distributions and demand functions. Importantly, although I believe that the main nature of the results will be sustained for more general distributions and demand curves as well, our goal in this paper is to demonstrate how precision of private information in large industrial markets can affect price-taking behavior and consequently how the performance of the market can be affected substantially. Future work that further explores and extends on these results can help shed more light on the price and surplus formation in large industrial markets with information asymmetry.