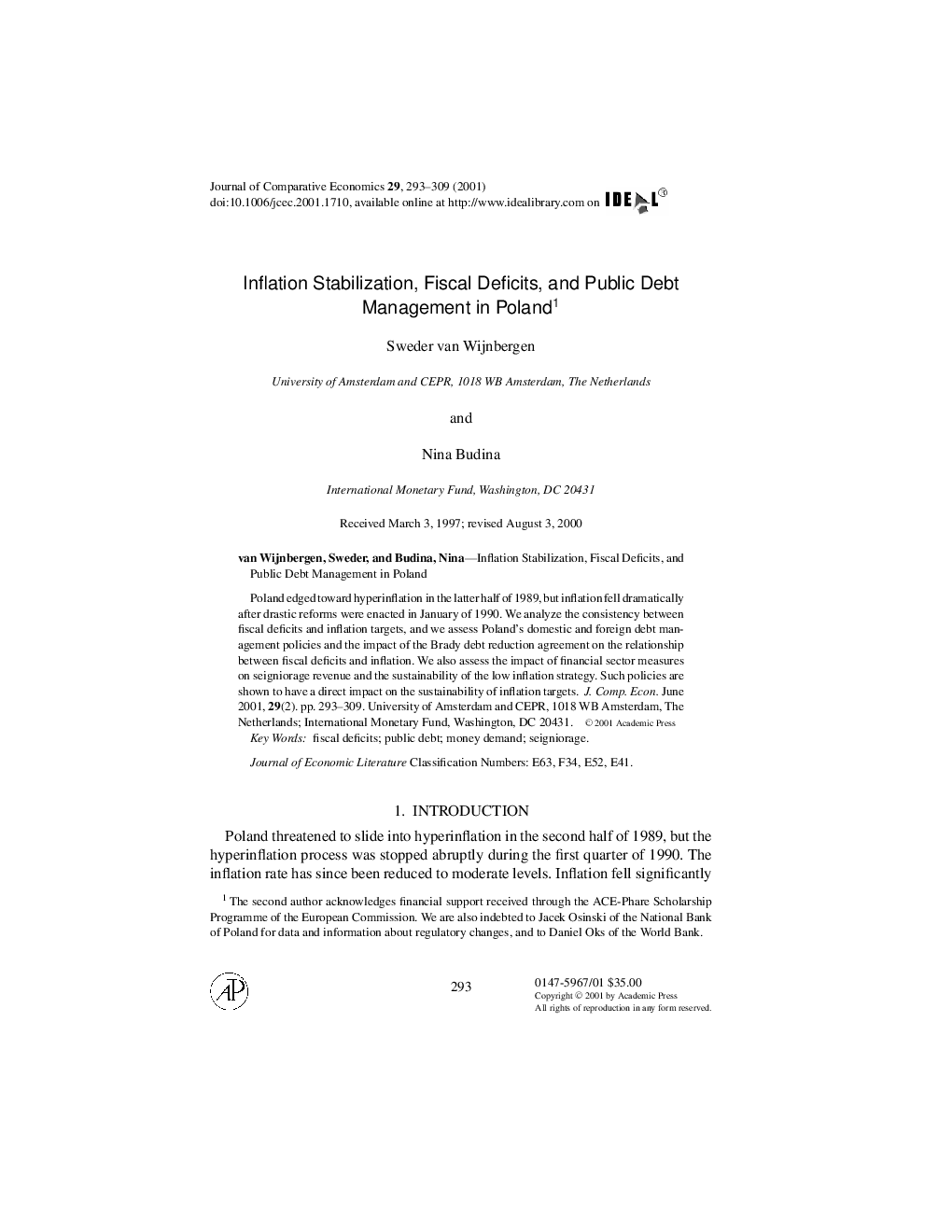 Poland edged toward hyperinflation in the latter half of 1989, but inflation fell dramatically after drastic reforms were enacted in January of 1990. We analyze the consistency between fiscal deficits and inflation targets, and we assess Poland's domestic and foreign debt management policies and the impact of the Brady debt reduction agreement on the relationship between fiscal deficits and inflation. We also assess the impact of financial sector measures on seigniorage revenue and the sustainability of the low inflation strategy. Such policies are shown to have a direct impact on the sustainability of inflation targets. J. Comp. Econ., June 2001 29(2), pp. 293–309. University of Amsterdam and CEPR, 1018 WB Amsterdam, The Netherlands; International Monetary Fund, Washington, DC 20431. Copyright 2001 Academic Press.

Poland threatened to slide into hyperinflation in the second half of 1989, but the hyperinflation process was stopped abruptly during the first quarter of 1990. The inflation rate has since been reduced to moderate levels. Inflation fell significantly 1 The second author acknowledges financial support received through the ACE-Phare Scholarship Programme of the European Commission.We are also indebted to Jacek Osinski of the National Bank of Poland for data and information about regulatory changes, and to Daniel Oks of the World Bank.from over 600% in 1989 to below 20% in 1996. This success has been sustained in later years. Debt-management policies have played an important role in the macroeconomic stabilization package. The Polish debt rescheduling deal at the beginning of the 1990’s decreased the foreign debt burden successfully and, together with the implementation of restrictive monetary policies, has removed the obstacles to achieving a sustainable fiscal balance. This process was supported by a substantial reduction in the noninterest fiscal deficit, mainly achieved through tax reform and the reduction of subsidies. All of this occurred while the links among monetary policy, exchange rates, and inflation were shifting due to a process of financial sector reform implemented concurrently with the stabilization package. Many of these issues are familiar from other countries, thus making an analysis of the Polish case of wider interest.In order to analyze this experience, we outline a simple framework that links inflation, fiscal deficits, and public debt management and apply it to Poland. The framework is designed for environments that have sparse data and are undergoing structural change. It focuses on the interplay among interest rates, growth rates, and primary deficits in determining fiscal sustainability for different inflation targets.We pay special attention to the role of debt management and exchange rate policy and to the impact of financial sector reform on the relationships among asset demands, seigniorage, and inflation.The framework draws on the public finance approach to inflation pioneered byPhelps (1973); his approach is also followed in the well-known analysis of the relationships among debt management, monetary policy, and inflation by Sargent and Wallace (1981). This paper extends their approach by incorporating a commercial banking sector, which is a crucial factor in understanding the links among fiscal policy, money growth, and inflation in many developing countries. Section 2 describes the analytical framework, presents the calculation of the Polish real quasi-fiscal deficit for the consolidated government and central bank (CB) accounts, and gives a detailed empirical analysis of the revenue from seigniorage and its inflation dependence. Section 3 assesses consistency in 1992 and shows the impact of domestic and foreign debt management policies on the trade-off between inflation and fiscal deficits. In that section, we describe the Polish foreign debt reduction agreement and its impact on the inflation–fiscal deficits trade-off. The section also discusses other factors affecting the relation between fiscal deficits and inflation, such as real exchange rate changes, delays in fiscal adjustment, and changes in reserve requirements. Section 4 examines the situation in 1995 and 1996 in comparison to 1992, the year before the debt and financial market reforms took hold. Section 5 combines the results from the various sections and concludes that fiscal and financial policies in Poland, supported by two effective international debt renegotiations, have succeeded in providing a sustainable low inflation environment. The relative ease with which Poland seems to have weathered the Asia crisis in 1997 and the subsequent crash in Russia in mid-1998 supports that finding.

Poland was on the brink of hyperinflation at the end of 1989, but, it has been able to abruptly halt the process after liberalizing prices in January 1990. Since then inflation has been reduced to close to single-digit levels in 1998. As in most countries in which debt markets are in their infancy, fiscal deficits broadly defined have played an important role in the monetary process that has fuelled inflation.To analyze the factors behind Poland’s success, we construct a simple model that links inflation, fiscal deficits, and public debt management. This model may be used to derive financeable deficits and the required deficit reduction necessary for consistency among given output growth rates, inflation targets, and target debt–output ratios, or to obtain the equilibrium inflation rate for which no fiscal adjustment is necessary. The model is designed to be applicable in environments with sparse data. In fact, like the well-known monetary approach model used routinely by the IMF, it requires only money demand functions for the various components of M2. Our econometric analysis showed that stable long-term relationships could be extracted from Polish data despite the turbulence of the period over which data were available.The application of the model to the budget situation of 1992 seems to show consistency between inflation targets and fiscal policy in that year.However, further analysis indicates that this result depends critically on the fact that interest rates paid on both foreign and domestic debt were far below market rates. Redoing the analysis at long-run market rates for both foreign and domestic debt shows that fiscal policy and inflation targets were in fact out of line. Thus, the fiscal balance that seemed to have been achieved in 1992 was unsustainable since new debt would not be available at below-market terms.We indicate how external debt restructuring in the following years and various measures concerning the banking system contributed toward bringing the fiscal policy in line with inflation targets on a more sustainable basis.This analysis is of interest in its own right, beyond the specific application to Poland, as an application of a framework explicitly incorporating the commercial banking system into an analysis of the relation between fiscal deficits and inflation.The discussion also contains relevant lessons for other countries that are in similar stages of reform and stabilization. For example, the Polish debt rescheduling deal initiated at the beginning of the the 1990’s decreased successfully the foreign debt burden as the ratio of foreign debt to GDP fell from 82% in 1990 to about 45% in 1994. We show that this played an important role in making the Polish anti inflation drive sustainable. Since runaway inflation is a major factor hampering economic growth, the impact of debt restructuring on the fiscal sustainability of low inflation targets is a key channel through which debt reduction has contributed to the restoration of economic growth in Poland.The analysis also indicates the relevance of financial-sector measures for the structure of money demand and, consequently, for the basis of the inflation tax and its resulting revenues. An important lesson is that every major financial reform effort should be accompanied by a macroeconomic analysis focusing on the consequences for fiscal policy of the reform measures under consideration. Another noteworthy point revealed by the analysis is the potentially high cost of postponing fiscal adjustment in an environment of high interest rates and low economic growth. Delays in making fiscal adjustments under such circumstances will lead to a rapidly escalating debt burden and eventually to much higher inflation rates. A final warning concerns Poland’s relatively high level of seigniorage and inflation tax revenues for any given inflation rate; these are in line with the experience of other middle-income countries, but they are very high by the standards of countries with more advanced financial systems. Thus, Poland should expect seigniorage revenues to fall for all levels of inflation as its financial sector progresses toward E.U.