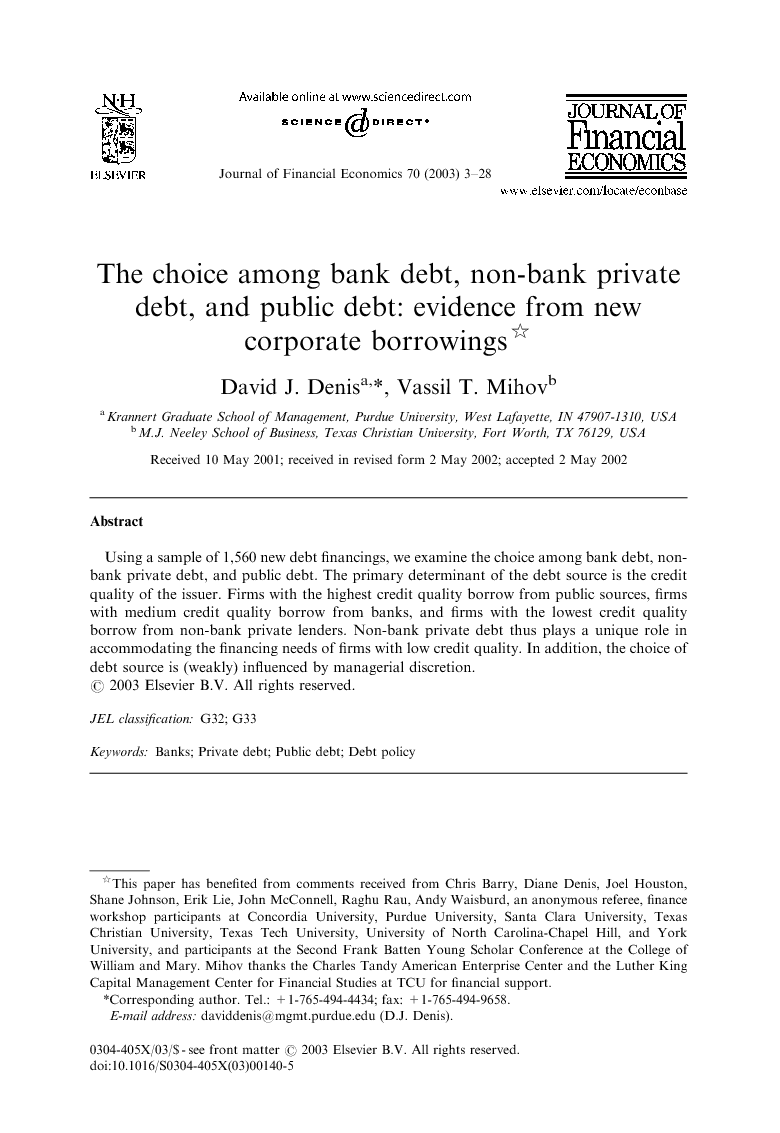 Flow of funds data from the Federal Reserve System indicate that net new issues of equity have been negligible over the past two decades.1 In other words, debt financing is the predominant source of new external funds for US corporations. New debt financing comes from three primary sources: banks, non-bank private lenders, and public debt offers. We provide evidence on the choice among these alternative sources of debt financing. Previous studies hypothesize that private debt financing has a significant advantage over public debt in terms of monitoring efficiency (e.g., Diamond, 1984; Boyd and Prescott, 1986; Berlin and Loyes, 1988), access to private information (Fama, 1985), and the efficiency of liquidation and renegotiation in financial distress (Chemmanur and Fulghieri, 1994; Gertner and Scharfstein, 1991). However, Rajan (1992) argues that private lenders can also negatively affect the borrower by extracting rents and distorting management incentives. Prior empirical studies by Houston and James (1996), Johnson (1997), Krishnaswami et al. (1999), and Cantillo and Wright (2000) document a positive relation between the use of public debt financing and firm characteristics such as size, leverage, age, and amount issued. However, these studies differ in their findings about the effects of the market-to-book ratio and the proportion of fixed assets to total assets on the source of debt. We extend the literature on debt choice in several ways. First, we use an incremental approach that analyzes the determinants of new debt issues.2 The incremental approach allows us to link the borrowing decisions of the firm with variables measured just prior to the borrowing decision; to investigate the borrowing decisions of firms that have no debt outstanding at the time of issuance; and to compare the characteristics of different types of debt financing. On the other hand, although the incremental approach is well suited to testing theories that rely on time-variation in firm characteristics, it is not as well suited to testing theories that relate the mix of debt to the firm's asset mix. Moreover, an incremental borrowing decision might represent a temporary deviation from the firm's optimal mix of debt claims. For these reasons, our findings should be viewed as complementing those from studies of the existing mix of debt claims. Second, unlike most prior studies, our empirical analysis distinguishes between bank and non-bank private debt. This distinction is important since we show that non-bank private debt is an economically important financing source. Moreover, non-bank private loans exhibit substantially different characteristics than bank loans. Third, we provide direct evidence on the role of credit quality in the choice of debt source. Several theoretical studies predict an association between credit quality and the choice between public and private debt, but with the exception of Blackwell and Kidwell (1988) there is, to our knowledge, little published research on this issue. Moreover, as noted above, the prior theory typically does not distinguish between bank and non-bank private debt. We argue, however, that non-bank private debt is particularly well suited to serving the needs of debt issuers with poor credit quality. Finally, we provide evidence on the role of managerial discretion in the choice of debt instrument. Recent studies by Stulz (1990) and Berger et al. (1997) point towards a more prominent role for managerial discretion in capital structure decisions. Because of their more concentrated holdings and superior access to information, private lenders are more likely to constrain managerial discretion than are public lenders. Hence, the managerial discretion hypothesis predicts that, all else equal, managers will seek to avoid this constraint by issuing public debt. We argue, however, that managers with high equity ownership will be less likely to avoid the constraints of private debt because (i) their ownership stakes give them the incentive to choose the security that maximizes value and (ii) higher ownership insulates managers from constraints imposed by debtholders. Thus, under the managerial discretion hypothesis, we expect a negative relation between managerial equity ownership and the likelihood of public debt issues. Our sample consists of 1,560 new debt financings completed by 1,480 public companies in 1995 and 1996. We find that incremental debt choices are linked with prior financing decisions. Firms with public debt outstanding are likely to issue public debt in their marginal financing choices. Conversely, firms that have not established a reputation in the credit markets predominantly choose to issue bank debt. Controlling for the firm's existing mix of debt claims, we find that the primary determinant of the choice of debt instrument is the credit quality of the issuing firm. Public borrowers are larger and more profitable, have a higher proportion of fixed assets to total assets, and have higher credit ratings than firms borrowing from either banks or non-bank private lenders. Conversely, firms that borrow from non-bank private lenders tend to be the poorest performers and have the lowest credit rating and the highest ex-ante probability of default. These findings are not driven by firms with no debt at the time of issuance, and continue to hold if we restrict the sample to larger firms that, presumably, have access to public debt markets. In contrast, we find only weak evidence that debt choice is related to managerial ownership. Our findings suggest that firms with the highest credit quality borrow from public sources, firms with medium credit quality borrow from banks, and firms with the lowest credit quality borrow from non-bank private lenders. The results for high- and medium-quality firms are broadly consistent with the predictions of models based on information asymmetry, borrower reputation, and efficient renegotiation. These models differ, however, in their predictions for firms with the lowest credit quality. Our findings indicate that the market for non-bank private debt, which has been largely ignored in the prior literature, complements bank and public sources of borrowing by accommodating firms with the lowest credit and project quality. The remainder of the paper is organized as follows. In Section 2, we develop hypotheses from the various theories about the determinants of debt choice and summarize the prior empirical evidence. In Section 3, we describe the data and the empirical methodology. Section 4 presents our primary results. Section 5 concludes.

We analyze the determinants of the choice among public debt, bank debt, and non-bank private debt for a sample of 1,560 new debt financings by publicly traded firms during 1995–1996. Unlike prior studies on debt choice, we examine the choice of new debt, rather than the proportions of existing private and public debt. We also distinguish empirically between bank and non-bank private debt, and include in our investigation firms that have no debt outstanding at the time of issuance. Our findings indicate that the choice of debt instrument is most strongly linked with the credit history of the issuing firm and the current credit quality of the issuer. Firms with the highest credit quality exhibit a strong preference for public debt, while firms with credit ratings towards the middle of the spectrum borrow from banks, and those at the bottom of the credit rating spectrum borrow from non-bank private sources. This pattern broadly supports the model of Diamond (1991) in which borrowers with high credit ratings earn rents from their reputations with lenders. The existence of such rents is also consistent with Graham and Harvey's (2001) observation that managers place a high priority on maintaining their existing credit rating. At the other end of the spectrum, our findings suggest that non-bank private debt plays a unique role in accommodating the debt financing needs of firms with low credit quality. Our findings raise several interesting questions for future research. First, although we distinguish between bank and other private debt, the latter category encompasses a variety of lending instruments, such as term loans, revolvers, and senior notes, which appear to be very different in terms of placement structure, maturity, and identity of lenders. Further investigation of these types of private debt could enhance our understanding of alternative debt sources. Second, it would be interesting to investigate whether the relations documented in this study have changed over time, perhaps with changes in the macroeconomic environment. Finally, it would be interesting to investigate empirically the relation between debt choice and firm value.