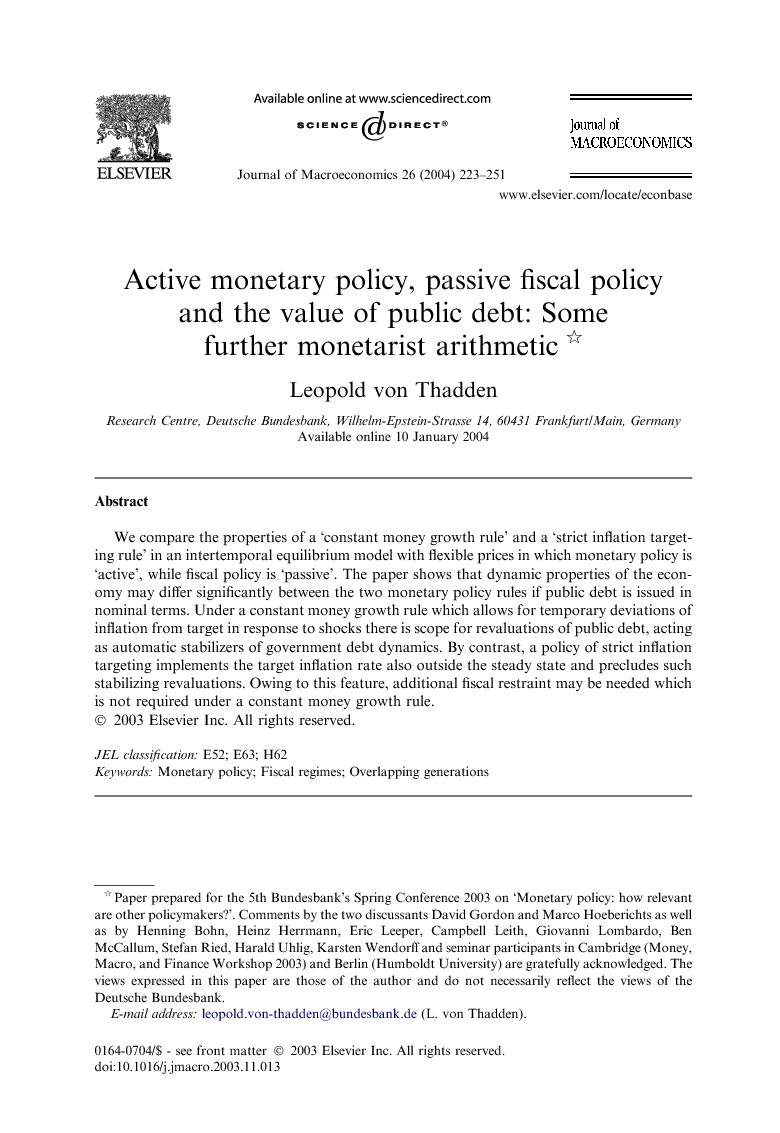 We compare the properties of a `constant money growth rule' and a `strict inflation targeting rule' in an intertemporal equilibrium model with flexible prices in which monetary policy is `active', while fiscal policy is `passive'. The paper shows that dynamic properties of the economy may differ significantly between the two monetary policy rules if public debt is issued in nominal terms. Under a constant money growth rule which allows for temporary deviations of inflation from target in response to shocks there is scope for revaluations of public debt, acting as automatic stabilizers of government debt dynamics. By contrast, a policy of strict inflation targeting implements the target inflation rate also outside the steady state and precludes such stabilizing revaluations. Owing to this feature, additional fiscal restraint may be needed which is not required under a constant money growth rule.

Following the seminal paper by Sargent and Wallace (1981), there is a large literature which stresses that the active control of inflation through the monetary agent requires that the fiscal agent accepts the residual role within the government's budget constraint, taking passively as given the behaviour of the monetary agent. For any particular inflation target, the fiscal implications of such a role assignment are likely to be quite different, however, depending on the details of the monetary policy rule. Specifically, as recently stressed by Woodford (2001), as long as government debt is issued largely in nominal terms, different monetary policy rules are likely to imply different government debt dynamics through rule-specific valuations of government debt, constraining thereby the fiscal agent in different ways. Against this background, this paper offers a simple analytical framework to study effects of monetary policy on the valuation of outstanding government debt from a dynamic general equilibrium perspective which takes the desirability of a mix of active monetary and passive fiscal policy as given. The main idea of this paper is to illustrate that monetary policy may indeed constrain fiscal policy in rather different ways, depending on whether monetary policy accepts stabilizing revaluations of government debt or not. More specifically, using a monetary growth model with flexible prices, we compare the properties of two stylized monetary policy rules which have identical steady-state properties but require different actions out of steady state. First, we consider a policy of a constant money growth rule which allows for temporary deviations of inflation from target. As a result, there is scope for revaluations of public debt in response to shocks, and these revaluations are shown to act as automatic stabilizers of government debt dynamics. Second, we consider a policy of strict inflation targeting which implements the target inflation rate also outside the steady state. Essentially, such a policy fixes the value of government debt in real terms and precludes thereby stabilizing revaluations. As we show, this feature implies that additional fiscal restraint may be needed under strict inflation targeting which is not required under a constant money growth rule. As it stands, our approach suffers from the fact that we do not establish optimal programs of monetary and fiscal policy. Similarly, our paper abstracts entirely from credibility issues. Extensions of the model along these dimensions would be important. Yet, given our particular assumption of overlapping generations with finite decision horizons, such extensions raise additional questions which are beyond the scope of this paper. Despite these shortcomings, the largely descriptive findings established in this paper do indicate, however, that the revaluation channel of government debt can be of considerable importance for the dynamic properties of an otherwise standard monetary growth model.