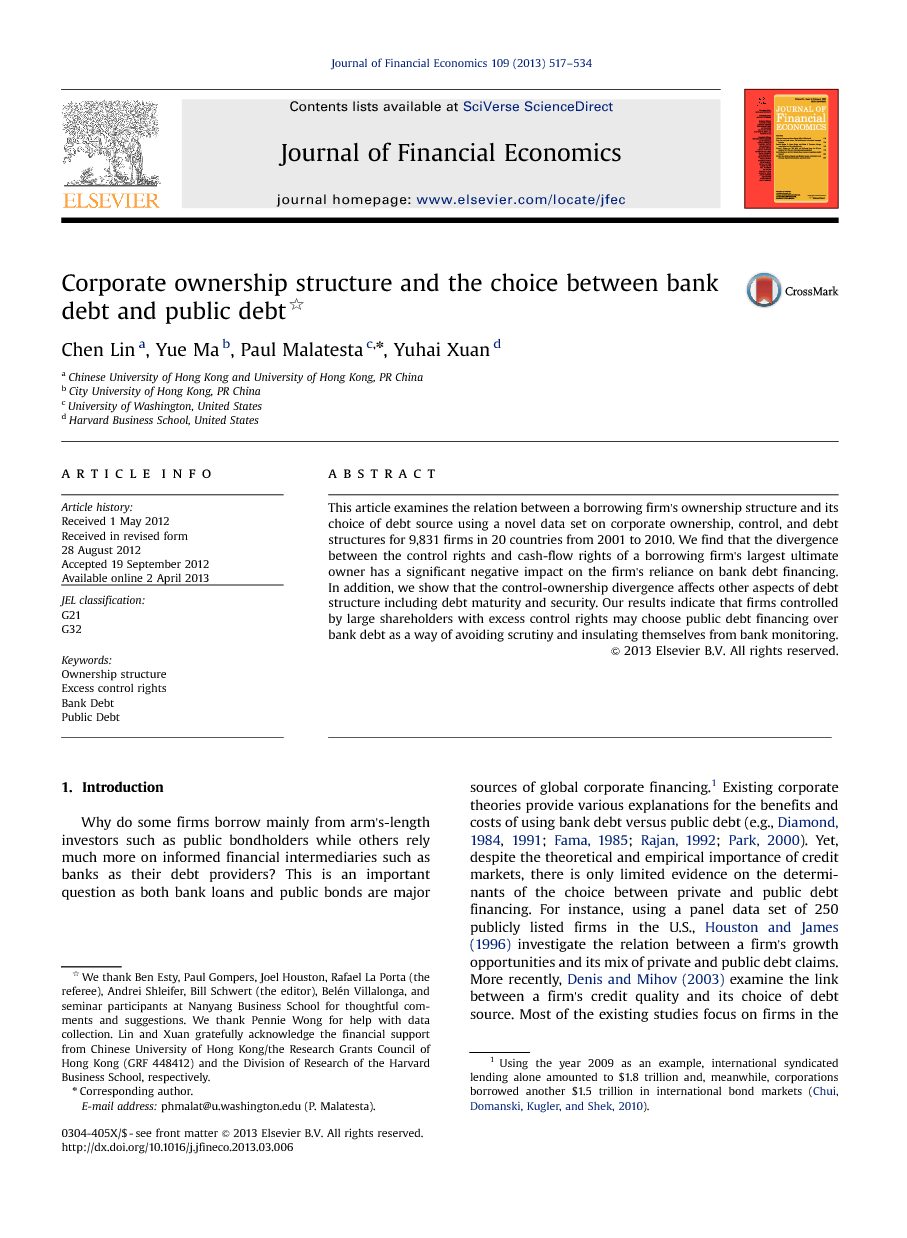 This article examines the relation between a borrowing firm's ownership structure and its choice of debt source using a novel data set on corporate ownership, control, and debt structures for 9,831 firms in 20 countries from 2001 to 2010. We find that the divergence between the control rights and cash-flow rights of a borrowing firm's largest ultimate owner has a significant negative impact on the firm's reliance on bank debt financing. In addition, we show that the control-ownership divergence affects other aspects of debt structure including debt maturity and security. Our results indicate that firms controlled by large shareholders with excess control rights may choose public debt financing over bank debt as a way of avoiding scrutiny and insulating themselves from bank monitoring.

There is rich empirical evidence suggesting that the divergence between ownership and control creates strong incentives for large shareholders to engage in tunneling and other moral hazard activities. Yet little is known about how such incentives and activities induced by dominant shareholders’ excess control rights affect firm financing behavior. The aim of this paper is to enhance our knowledge of these matters by examining the choice of debt source by firms with control-ownership divergences. Compared to public bondholders, banks can serve as more effective monitors in deterring potential self-dealing activities because of their concentrated holdings, strong bargaining power, and superior access to information. As a consequence, firms controlled by large shareholders with excess control rights and hence strong tunneling incentives may prefer public debt financing over bank debt as a way to evade scrutiny and insulate themselves from bank monitoring. Our paper examines this bank monitoring avoidance hypothesis using a novel, hand-collected data set on corporate ownership, control, and debt structures for 9,831 firms in 20 countries from 2001 to 2010. We find strong evidence that the monitoring avoidance incentives induced by the separation of ownership and control exert a significant impact on the choice between bank debt and public debt. Specifically, we find that the divergence between the control rights and cash-flow rights of a borrowing firm's controlling shareholder decreases its reliance on bank debt financing and increases its reliance on public debt financing significantly. These effects are particularly pronounced for family-controlled firms, informationally opaque firms, and firms with high financial distress risk, and are weakened by the presence of multiple large owners and strong shareholder rights. We also find that the control-ownership divergence of a borrowing firm's dominant shareholder increases the firm's debt maturity and decreases its debt collateralization significantly. Collectively, our results identify ownership structure as an important determinant of firm debt structure and shed new light on a channel through which the control-ownership divergence and the ensuing moral hazard incentives influence firm financial decisions.