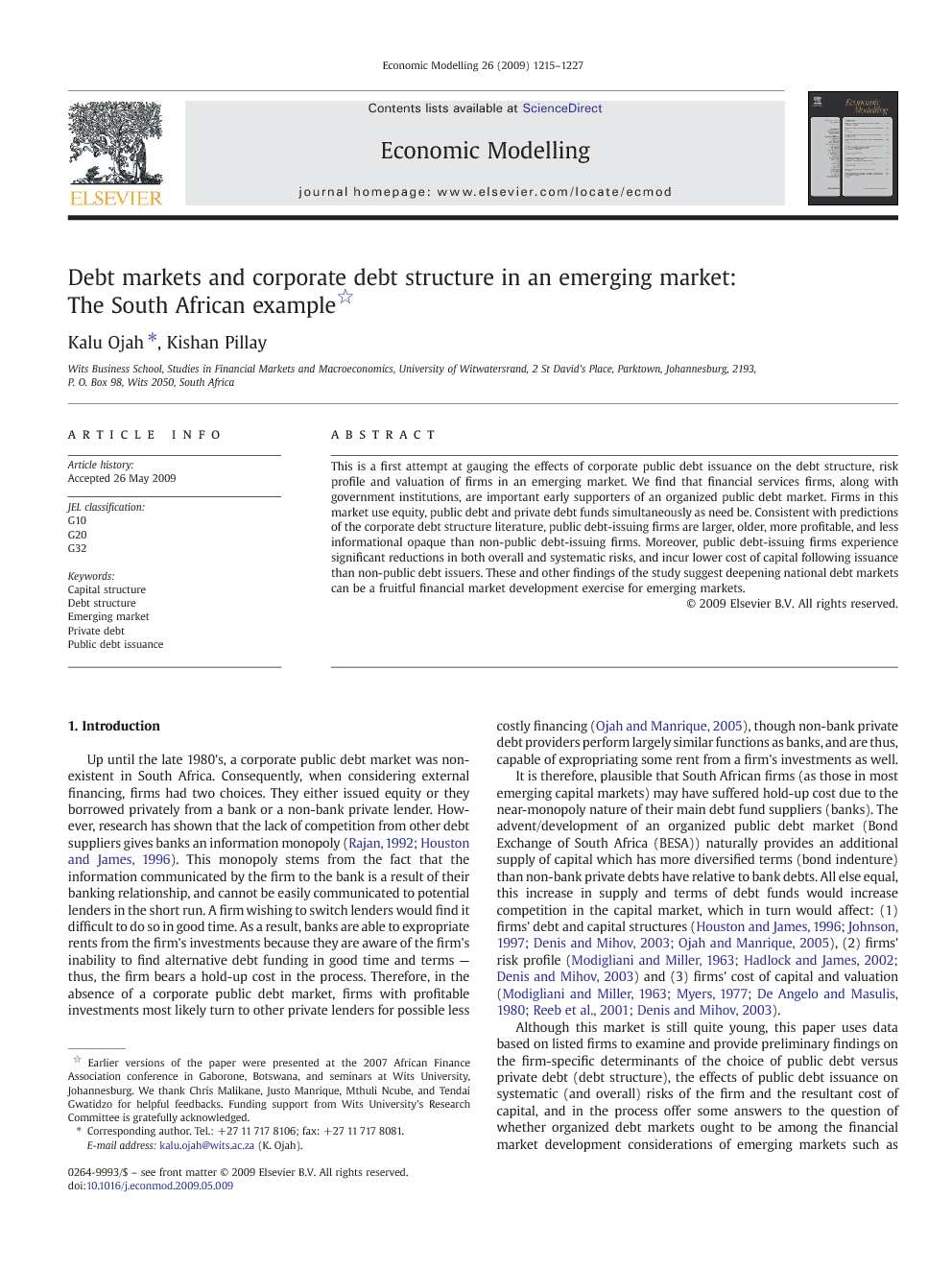 This is a first attempt at gauging the effects of corporate public debt issuance on the debt structure, risk profile and valuation of firms in an emerging market. We find that financial services firms, along with government institutions, are important early supporters of an organized public debt market. Firms in this market use equity, public debt and private debt funds simultaneously as need be. Consistent with predictions of the corporate debt structure literature, public debt-issuing firms are larger, older, more profitable, and less informational opaque than non-public debt-issuing firms. Moreover, public debt-issuing firms experience significant reductions in both overall and systematic risks, and incur lower cost of capital following issuance than non-public debt issuers. These and other findings of the study suggest deepening national debt markets can be a fruitful financial market development exercise for emerging markets.

This study, interestingly, shows that financial firms, along with government institutions, are important early supporters of an organized public debt market. Further, it shows that though firms would optimize their debt (capital) structure if privy to a fuller complement of external funds suppliers, certain firms are better suited to borrowing from the public as well as private lenders while others with different characteristics are suited to borrowing mainly from private lenders, in line with predictions of the corporate debt structure literature. Specifically, we find that the corporate debt structure in South Africa fits well the predictions of the debt structure literature: The average public borrower is significantly larger, more profitable, has a longer operating history, and is less opaque than non-public borrowers. We find that public debt-issuing firms in the South African emerging capital market experience a significant reduction in both overall and systematic risks following issuance, and incur lower costs of capital as a result. In contrast, industry-matched, non-public debt issuers experience insignificant changes in these performance indicators. Given the sample of this study and our inclusion of financial services firms, we view these results as preliminary. Though the appropriate techniques used in the analyses permit us to infer important conclusions, such as for the first time recording that financial services firms and government units are important early supporters of a fledgling organized capital market, future larger and richer set of data would allow us to gain more and stronger insights into corporate debt structure in emerging markets. Importantly, note that though South Africa is an emerging market, its capital markets' infrastructure is considered world-class. We therefore, need a cross-country analysis before we can draw general conclusions about the benefits of establishing a corporate public debt market in emerging markets — such as the Bond Exchange of South (BESA). It is plausible that emerging markets have to attain a certain level of general capital market development, with appropriate requisite institutions, before they can derive the sort of benefits recorded in the South African case. This point is particularly instructive in the light of Singh's (1999) scepticism about aspects of financial market development in emerging markets. Nevertheless, our results support calls for emerging markets to consider the deepening of their debt markets as a fruitful aspect of their financial markets development agenda.