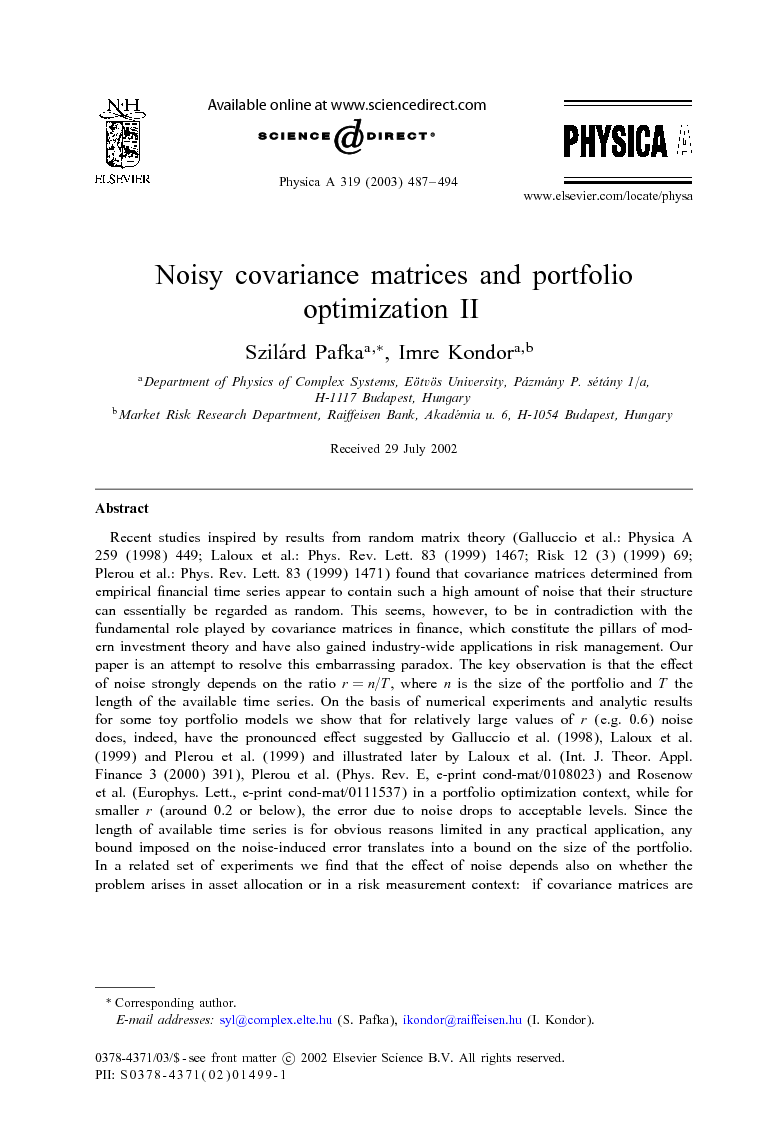 Recent studies inspired by results from random matrix theory (Galluccio et al.: Physica A 259 (1998) 449; Laloux et al.: Phys. Rev. Lett. 83 (1999) 1467; Risk 12 (3) (1999) 69; Plerou et al.: Phys. Rev. Lett. 83 (1999) 1471) found that covariance matrices determined from empirical financial time series appear to contain such a high amount of noise that their structure can essentially be regarded as random. This seems, however, to be in contradiction with the fundamental role played by covariance matrices in finance, which constitute the pillars of modern investment theory and have also gained industry-wide applications in risk management. Our paper is an attempt to resolve this embarrassing paradox. The key observation is that the effect of noise strongly depends on the ratio r=n/T, where n is the size of the portfolio and T the length of the available time series. On the basis of numerical experiments and analytic results for some toy portfolio models we show that for relatively large values of r (e.g. 0.6) noise does, indeed, have the pronounced effect suggested by Galluccio et al. (1998), Laloux et al. (1999) and Plerou et al. (1999) and illustrated later by Laloux et al. (Int. J. Theor. Appl. Finance 3 (2000) 391), Plerou et al. (Phys. Rev. E, e-print cond-mat/0108023) and Rosenow et al. (Europhys. Lett., e-print cond-mat/0111537) in a portfolio optimization context, while for smaller r (around 0.2 or below), the error due to noise drops to acceptable levels. Since the length of available time series is for obvious reasons limited in any practical application, any bound imposed on the noise-induced error translates into a bound on the size of the portfolio. In a related set of experiments we find that the effect of noise depends also on whether the problem arises in asset allocation or in a risk measurement context: if covariance matrices are used simply for measuring the risk of portfolios with a fixed composition rather than as inputs to optimization, the effect of noise on the measured risk may become very small.

In this paper, we have studied the implications of noisy covariance matrices on portfolio optimization and risk management. The main motivation for this analysis was the apparent contradiction between results obtained on the basis of random matrix theory and the fact that covariance matrices are so widely utilized for investment or risk management purposes. Using a simulation-based approach we have shown that for parameter values typically encountered in practice the effect of noise on the risk of the optimal portfolio may not necessarily be as large as one might expect on the basis of the results of [1], [2] and [3]. The large discrepancy between “predicted” and “realized” risk obtained in [4] and [5] can be explained by the low values of T/n used in these studies; for larger T/n the effect becomes much smaller. The analytic formulae derived in this paper provide a lower bound on the effect of noise, or, conversely, an upper bound on the size of the portfolios whose risk can be estimated with a prescribed error. Finally, we have shown that for portfolios with weights determined independently from the covariance matrix data, the effect of noise on the risk measurement process is quite small. A very interesting topic for further research would be to analyze the magnitude of these effects for portfolios constructed by techniques really used in practice, for example by an asset manager or hedge fund, since these methods often combine sophisticated optimization schemes with more subjective expert assessments.