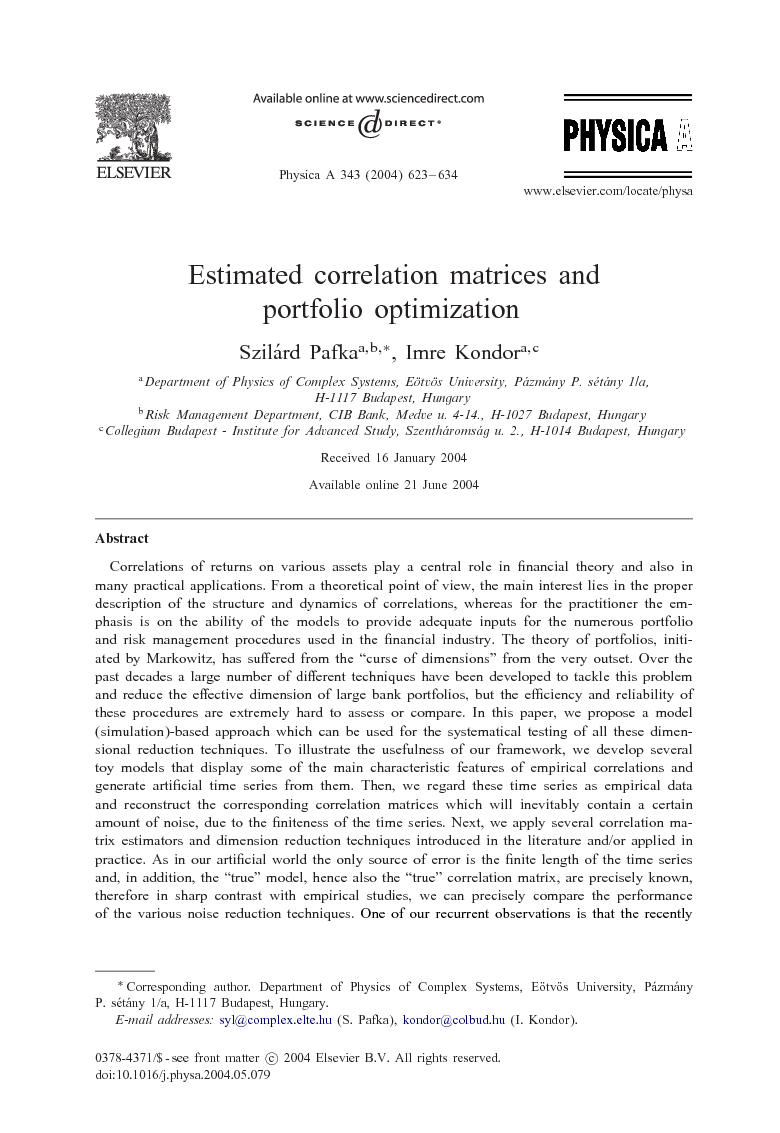 Correlations of returns on various assets play a central role in financial theory and also in many practical applications. From a theoretical point of view, the main interest lies in the proper description of the structure and dynamics of correlations, whereas for the practitioner the emphasis is on the ability of the models to provide adequate inputs for the numerous portfolio and risk management procedures used in the financial industry. The theory of portfolios, initiated by Markowitz, has suffered from the “curse of dimensions” from the very outset. Over the past decades a large number of different techniques have been developed to tackle this problem and reduce the effective dimension of large bank portfolios, but the efficiency and reliability of these procedures are extremely hard to assess or compare. In this paper, we propose a model (simulation)-based approach which can be used for the systematical testing of all these dimensional reduction techniques. To illustrate the usefulness of our framework, we develop several toy models that display some of the main characteristic features of empirical correlations and generate artificial time series from them. Then, we regard these time series as empirical data and reconstruct the corresponding correlation matrices which will inevitably contain a certain amount of noise, due to the finiteness of the time series. Next, we apply several correlation matrix estimators and dimension reduction techniques introduced in the literature and/or applied in practice. As in our artificial world the only source of error is the finite length of the time series and, in addition, the “true” model, hence also the “true” correlation matrix, are precisely known, therefore in sharp contrast with empirical studies, we can precisely compare the performance of the various noise reduction techniques. One of our recurrent observations is that the recently introduced filtering technique based on random matrix theory performs consistently well in all the investigated cases. Based on this experience, we believe that our simulation-based approach can also be useful for the systematic investigation of several related problems of current interest in finance.

In this paper, we described a model (simulation)-based approach which can be used for a systematic investigation of the performance of various noise reduction procedures applied in portfolio selection and risk management. To demonstrate the usefulness of this approach we developed several toy models for the structure of financial correlations and, by considering only the noise arising from the finite length of the model-generated time series, we analyzed the performance of several correlation matrix estimation procedures in a simple portfolio optimization context. Our results agree well with the findings of previous empirical studies. The effect of noise in correlation matrices determined from financial series can indeed be large. However, most practitioners use techniques that, by generally reducing the effective dimensionality of the problem, can very efficiently suppress the effect of noise. We found that the filtering based on random matrix theory is particularly powerful in this respect. The success of dimensional reduction procedures goes a long way to explain how correlation matrices that contain a huge amount of noise can nevertheless remain useful in practice.