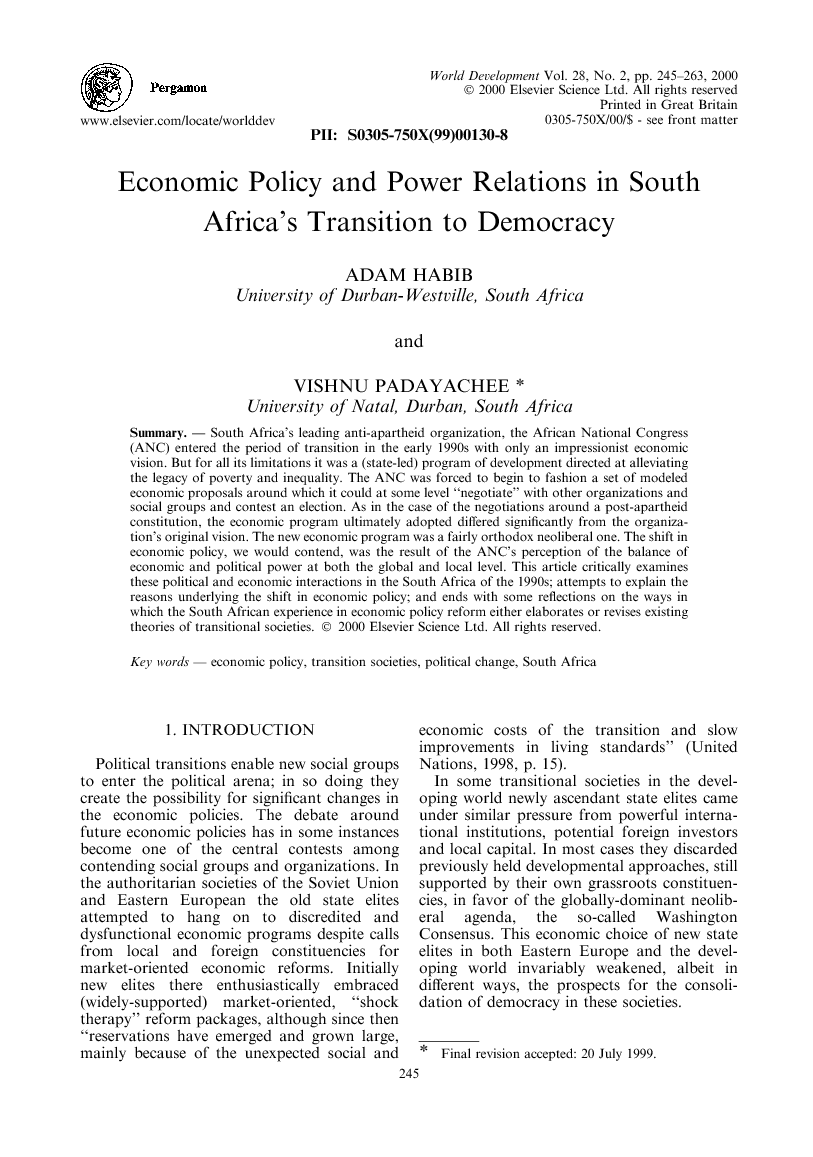 South Africa's leading anti-apartheid organization, the African National Congress (ANC) entered the period of transition in the early 1990s with only an impressionist economic vision. But for all its limitations it was a (state-led) program of development directed at alleviating the legacy of poverty and inequality. The ANC was forced to begin to fashion a set of modeled economic proposals around which it could at some level “negotiate” with other organizations and social groups and contest an election. As in the case of the negotiations around a post-apartheid constitution, the economic program ultimately adopted differed significantly from the organization's original vision. The new economic program was a fairly orthodox neoliberal one. The shift in economic policy, we would contend, was the result of the ANC's perception of the balance of economic and political power at both the global and local level. This article critically examines these political and economic interactions in the South Africa of the 1990s; attempts to explain the reasons underlying the shift in economic policy; and ends with some reflections on the ways in which the South African experience in economic policy reform either elaborates or revises existing theories of transitional societies.

Political transitions enable new social groups to enter the political arena; in so doing they create the possibility for significant changes in the economic policies. The debate around future economic policies has in some instances become one of the central contests among contending social groups and organizations. In the authoritarian societies of the Soviet Union and Eastern European the old state elites attempted to hang on to discredited and dysfunctional economic programs despite calls from local and foreign constituencies for market-oriented economic reforms. Initially new elites there enthusiastically embraced (widely-supported) market-oriented, “shock therapy” reform packages, although since then “reservations have emerged and grown large, mainly because of the unexpected social and economic costs of the transition and slow improvements in living standards” (United Nations, 1998, p. 15). In some transitional societies in the developing world newly ascendant state elites came under similar pressure from powerful international institutions, potential foreign investors and local capital. In most cases they discarded previously held developmental approaches, still supported by their own grassroots constituencies, in favor of the globally-dominant neoliberal agenda, the so-called Washington Consensus. This economic choice of new state elites in both Eastern Europe and the developing world invariably weakened, albeit in different ways, the prospects for the consolidation of democracy in these societies. This article investigates the emergence and impact of similar developments in South Africa. The leading anti-apartheid organization, the African National Congress (ANC) which previously only had an impressionistic (yet developmental) economic strategy was soon required to fashion a set of concrete, modeled, economic proposals around which it could at some level “negotiate” with other organizations and social groups and contest an election. As in the case of the negotiations around a post-apartheid constitution, the economic program ultimately adopted and implemented differed significantly from both the organization's original vision, and its initial proposals. This economic program was a fairly standard neoliberal one. The shift in economic policy, we would contend, was the result of the ANC's particular perception and interpretation of the balance of economic and political power, at both the global and local level. This understanding gave priority and prominence to the international financial and investor community rather than to the country's post-apartheid growth and development needs. The ANC placed unusually great stress on the importance of foreign capital inflows and on the lower costs of raising capital in international markets that would derive from strict adherence to principles of the Washington Consensus. The economic ideas and recommendations generated by progressive economic think tanks such as the Macroeconomic Research Group (MERG) despite being “owned” by the ANC alliance were not systematically debated and contested within high-level political structures and in multiparty negotiations. These developments and “failures” not only shaped the outcome of the economic strategy eventually adopted, but they have also had implications and consequences for the consolidation of democracy in South Africa. Section 2 is a statement on the nature of the economic challenge faced by the incoming democratic government. It then explores the original economic policies advocated by the National Party and those put forward by progressive ANC-aligned think tanks such as MERG, the Industrial Strategy Project (ISP) and the Reconstruction and Development Programme (RDP). Thereafter, it examines the Growth, Employment and Redistribution Strategy (GEAR), the economic program formulated by the ANC-led Government of National Unity (GNU) in 1996. Section 3 attempts to pull together some of the strands of the preceding discussion in an attempt at explaining some of the reasons for what many regard as a sea-change in ANC economic thinking. Section 4 then sets out key features of the economy and the performance of the economy since 1994. The following sections assess the potential impact of economic performance on the prospects for consolidating South Africa’s fledgling democracy. Section 8 discusses some of the ways in which the South African economic reform experience either elaborates or qualifies existing theories of transitional societies. Section 9 concludes with some reflections on the future trajectory of macroeconomic policy in South Africa, given changing domestic and global conditions.

The making of economic policy in South Africa's transition to democracy and the initial economic conditions and context under which such policy came to be fashioned, differed in some significant ways from the economic reform program in Eastern Europe and elsewhere. Key among these differences were that: —markets and market-institutions, albeit heavily distorted by racial considerations, already existed, and in some areas such as finance, commerce and communications, were both sophisticated and globally-linked. —South Africa possessed a powerful group of conglomerates that encompassed key elements of mining, finance, energy and industry, which worked ceaselessly throughout the transition to ensure that the new government would create the kind of macroeconomic stability that would facilitate the further globalization of their activities. —despite slow growth, rising unemployment, poverty, inequality and racially skewed provision of social and physical infrastructure, crucial macroeconomic balances were sound—foreign debt was low, domestic debt though rising was within (even Maastricht) limits, and inflation was within a manageable range. —the influence of the Washington institutions, though powerful, came via moral suasion, and was not enforced through conditionality with a structural adjustment program. An imaginative, heterodox economic policy package was called for in 1994 that would have combined initiatives to expand markets across race and space with state intervention to address historical backlogs, support industrial restructuring, and reform financial and labor markets, among other things. Such ideas were proposed by ANC-supporting think tanks such as MERG, ISP (to some extent) and was supported in large measure in the RDP. Granted, the implementation of such policies may have flown in the face of realpolitic and made the transition more “messy.” But we would maintain that a more state-interventionist economic program of the MERG-type may well have been acceptable to the Washington institutions in the context of the time. Moreover, the negotiations around such a program may well have forced would-be democratizers not to take existing power relations as given, but to pay attention to how such power relations could be transformed, and how to proceed with an economically redistributive agenda in, what would initially at least have been, an hostile environment. Thus, rather than having state elites seduced by the promise that foreign capital would pour into a liberalizing and privatizing economy after apartheid, a political process would have developed that would have forced the new government to address critical tasks relating to the identification of a proper role for the state, the restructuring and reorganization of state institutions (see on this Przeworski, 1997, p. 12), the development of new institutions and structures linking the state, private sector and grassroots organs of the community, and the mobilization of domestic financial resources. This kind of approach would have enabled the new South Africa to chart a development strategy geared to its own historical legacy and economic challenges, and in the process enhanced its prospects for consolidating democracy.