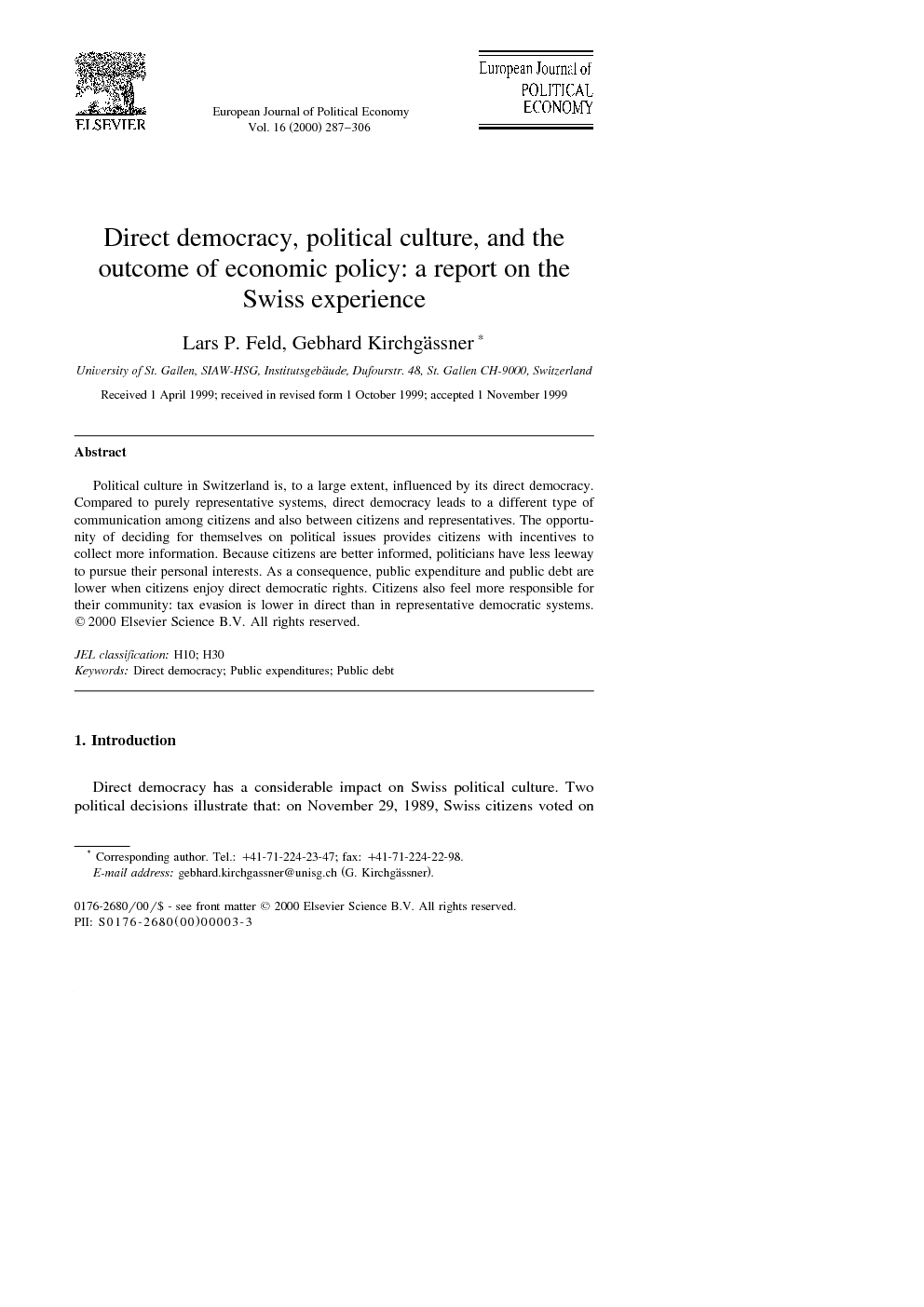 Political culture in Switzerland is, to a large extent, influenced by its direct democracy. Compared to purely representative systems, direct democracy leads to a different type of communication among citizens and also between citizens and representatives. The opportunity of deciding for themselves on political issues provides citizens with incentives to collect more information. Because citizens are better informed, politicians have less leeway to pursue their personal interests. As a consequence, public expenditure and public debt are lower when citizens enjoy direct democratic rights. Citizens also feel more responsible for their community: tax evasion is lower in direct than in representative democratic systems.

Direct democracy has a considerable impact on Swiss political culture. Two political decisions illustrate that: on November 29, 1989, Swiss citizens voted on an initiative that proposed to abolish the Swiss army. The initiative campaign was accompanied by an intensive and (partly) heated discussion among citizens. Until that time, the Swiss army was supposed to be perceived as a sacred institution not only by politicians, but also by voters. Indeed, the whole Swiss political establishment, all politically relevant parties and interest groups, the federal government and both chambers of the Swiss parliament suggested rejecting this initiative. Only the Social Democratic Party and the trade unions abstained from taking a position. Due to this unified attitude of the political establishment and the traditional support of Swiss citizens for their army, an overwhelming rejection of the initiative was expected. The actual result of the ballot came as a surprise: although the initiative was rejected, accompanied by a relatively high voter turnout of 69.2%, some 35.6% voted for the abolition of the army. This result shook the Swiss self-conception. Soon afterwards, some concessions for opponents of the army, like the introduction of a community service as an alternative to military service, were considered.1 Already in 1979, Swiss citizens voted on a possible exit from nuclear energy. The proposed initiative ‘for the preservation of popular rights and the security for the construction and operation of nuclear power plants’ was marginally rejected by the people on February 19, 1979, with a majority of 51.2%.2 However, this initiative led to public discussion about the risk of nuclear energy that was unprecedented in European countries at that time. In Germany, e.g., such discussion was largely prevented because of the unified support for nuclear power of all German parties, employer organisations and trade unions. Environmental policy in Switzerland is, at least in some respects, still supposed to be exemplary today compared to that of its European neighbours. Obviously, the Swiss political system in this case reacted faster to the needs of its citizens than the systems of neighbouring countries with (pure) representative democracies.3 At a first glance, these two cases do not seem to illustrate that citizens' preferences carry through more easily against the position of the political establishment in direct, than in representative democracy, as, e.g., Pommerehne (1978) has shown for Switzerland, or Gerber, 1996a and Gerber, 1999 for the United States.4 Indeed, both initiatives were rejected by voters with a majority following the proposal of the political establishment. It is important, however, to look not only at the decision that was finally adopted, but also to consider the impact of the political discussion among citizens preceding that decision. The political discourse and the accompanying exchange of arguments not only improve general information about a subject, but can lead to changes in the evaluation criteria by which individuals judge policies. Both initiatives mentioned above had a strong impact on future political decisions. The importance of the Swiss army was continually reduced afterwards, and Swiss environmental policy became one of the most progressive in Europe. Both initiatives are also examples of how direct legislation can increase the information of representatives about constituents' preferences.5 The role of discussion has been largely neglected in political economic analyses. Even more forcefully, political discussion is characterised as ‘cheap talk’.6 According to this view, there is little opportunity for credible transmission of information in political debates. Unless individuals have sufficiently similar interests, no credible communication occurs. A different view is expressed by Habermas (1981) in his Theory of Communicative Action. He emphasises the positive role of discussion and distinguishes two mechanisms for co-ordinating social actions: strategic interaction, where one person seeks to influence another by means of threatened punishment or promised reward (the typical representation in political economic models), in contrast to communicative interaction, where people seek to convince each other by means of rational arguments. Such communicative interaction is a form of deliberation. Decisions in direct legislation and in representative government can be expected to be differently influenced by this kind of deliberation. Compared to purely representative systems, direct democracy leads to a different type of communication among citizens, but also between citizens and representatives. The possibility of deciding for themselves on basic political issues provides incentives for citizens to collect more information. This information is not only needed to make a ‘correct’ decision at the ballots, but also in order to participate in the dialogue with other citizens. Thus, to be well informed about political issues is not only a voluntary contribution to a public good, but has also at least some characteristics of a private good. Moreover, as citizens are better informed in direct, than in purely representative democracies, politicians have less leeway to pursue their personal interests instead of those of the general public. Finally, citizens feel more responsible for their community. In this paper, the interaction of deliberation and direct legislation by the people is considered as a basic feature of Swiss political culture. After a discussion of the importance of deliberation in direct legislation and its impact on mediating information (Section 2), we briefly analyse the role of direct legislation for the principal–agent relationship between representatives and their constituency (Section 3). In Section 4, we survey empirical results on the impact of direct democracy in Switzerland. We show that public expenditure as well as public debt are lower when citizens possess direct democratic rights, so indicating the reduced discretion of politicians. We also show that tax evasion is — ceteris paribus — higher in purely representative systems, indicating a higher responsibility of citizens for their community. We conclude with some final remarks in Section 5.

In this paper, we have recounted how direct democracy affects economic policy performance as a peculiarity of political culture in Switzerland. Compared to purely representative systems, direct democracy provides two advantages of political decision making. First, the discussion process preceding a decision at the ballots enhances citizens' information about political issues to an extent that their information might even be better than the information of ordinary legislators in parliaments. This places strong restrictions on the ability of politicians or well informed specialists in the legislature to pursue their personal interests. Direct legislation thereby provides for control and sanction of legislators and government, and reduces inefficiency emerging from the principal–agent relationship between voters and their representatives. Second, the open and strongly visible political discourse at different levels of society can lead to a revision of citizens' evaluations of policies, from particular (individual) self-interest to a more general common interest. Citizens might feel more responsibility for their community and be more prepared to accept decisions that lead to an income or wealth loss. Problems characteristic of all democratic systems such as, e.g., the problem of rational ignorance, are better coped with in direct than in purely representative systems. A review of the empirical evidence on the impact of direct legislation on economic policy in Switzerland reveals strong empirical support for both hypotheses. The Wicksellian link between tax prices and public services is stronger in direct than in representative democracies. Public services are provided more efficiently in direct democracies than in representative democracies. Both empirical results reflect the reduced flexibility of representatives in enforcing their preferences against the interest of the general public. Willingness to pay taxes is also higher in direct than in representative democracies, indicating that citizens are, to a larger extent, satisfied with public services supplied. This points to greater efficiency in the provision of public services in direct democratic systems. Results concerning tax evasion as well as the stronger link between tax prices and public services indicate that citizens in direct democracies feel more responsible for their community. This is consistent with the evidence that economic performance, in general, is also better in direct democratic Swiss cantons than in representative ones. Political culture in Switzerland is indeed characterised by direct democratic elements, but not exclusively so. Another, perhaps equally important, principle of organisation of the Swiss state that has supposedly a strong impact on Swiss political culture is federalism, in particular fiscal federalism. Although as interesting as direct legislation, an analysis of Swiss federalism is beyond the scope of this paper. The arguments in this paper suggest policy recommendations with regard to the constitutional design of polities such as the EU, or possible constitutional reforms in other countries. Recommendations, which are based on the Swiss model, have already been made with respect to the fiscal constitution of the EU by Schneider (1993), Kirchgässner (1994), Feld and Kirchgässner (1996) and Feld et al. (2000).