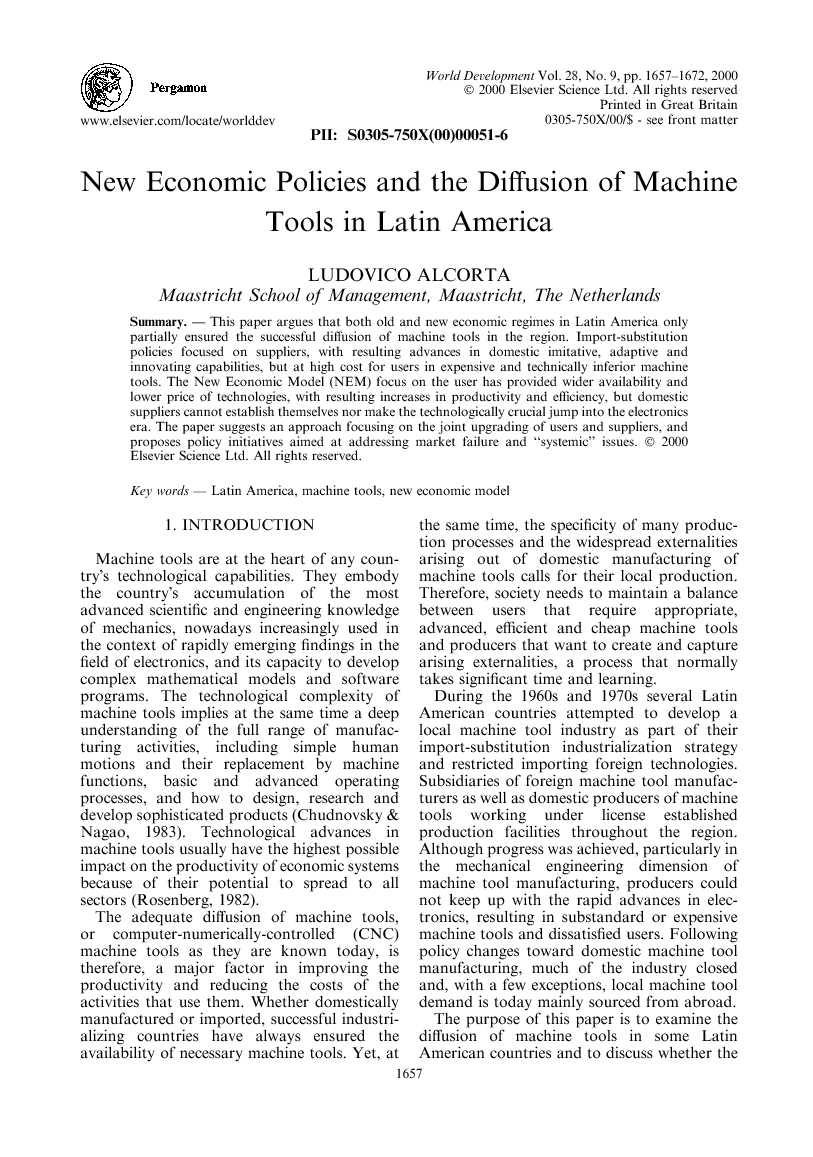 This paper argues that both old and new economic regimes in Latin America only partially ensured the successful diffusion of machine tools in the region. Import-substitution policies focused on suppliers, with resulting advances in domestic imitative, adaptive and innovating capabilities, but at high cost for users in expensive and technically inferior machine tools. The New Economic Model (NEM) focus on the user has provided wider availability and lower price of technologies, with resulting increases in productivity and efficiency, but domestic suppliers cannot establish themselves nor make the technologically crucial jump into the electronics era. The paper suggests an approach focusing on the joint upgrading of users and suppliers, and proposes policy initiatives aimed at addressing market failure and “systemic” issues.

Machine tools are at the heart of any country’s technological capabilities. They embody the country’s accumulation of the most advanced scientific and engineering knowledge of mechanics, nowadays increasingly used in the context of rapidly emerging findings in the field of electronics, and its capacity to develop complex mathematical models and software programs. The technological complexity of machine tools implies at the same time a deep understanding of the full range of manufacturing activities, including simple human motions and their replacement by machine functions, basic and advanced operating processes, and how to design, research and develop sophisticated products (Chudnovsky & Nagao, 1983). Technological advances in machine tools usually have the highest possible impact on the productivity of economic systems because of their potential to spread to all sectors (Rosenberg, 1982). The adequate diffusion of machine tools, or computer-numerically-controlled (CNC) machine tools as they are known today, is therefore, a major factor in improving the productivity and reducing the costs of the activities that use them. Whether domestically manufactured or imported, successful industrializing countries have always ensured the availability of necessary machine tools. Yet, at the same time, the specificity of many production processes and the widespread externalities arising out of domestic manufacturing of machine tools calls for their local production. Therefore, society needs to maintain a balance between users that require appropriate, advanced, efficient and cheap machine tools and producers that want to create and capture arising externalities, a process that normally takes significant time and learning. During the 1960s and 1970s several Latin American countries attempted to develop a local machine tool industry as part of their import-substitution industrialization strategy and restricted importing foreign technologies. Subsidiaries of foreign machine tool manufacturers as well as domestic producers of machine tools working under license established production facilities throughout the region. Although progress was achieved, particularly in the mechanical engineering dimension of machine tool manufacturing, producers could not keep up with the rapid advances in electronics, resulting in substandard or expensive machine tools and dissatisfied users. Following policy changes toward domestic machine tool manufacturing, much of the industry closed and, with a few exceptions, local machine tool demand is today mainly sourced from abroad. The purpose of this paper is to examine the diffusion of machine tools in some Latin American countries and to discuss whether the region’s New Economic Model (NEM) has allowed society to benefit from improved technologies and therefore higher productivity and to reap the gains from knowledge externalities. It will proceed as follows. The next section will provide a conceptual discussion of the diffusion process. Section 3 analyzes the diffusion of machine tools during import-substitution. Section 4 examines changes in public policy relevant to the diffusion of machine tools, mainly in the areas of trade, industry, finance and technology. Section 5 analyzes machine tool diffusion since the new policies were introduced. Some policy suggestions are made in Section 6.

Achieving a successful diffusion process involves a balance between suppliers obtaining the resources and time to incorporate technical change and reap emerging externalities, and users obtaining the embodied and disembodied knowledge at the price and moment that will make them more competitive and profitable. During import-substitution the policy regime focused almost exclusively on suppliers. Advances were made in terms of generating domestic imitative, adaptive and innovating capabilities. But such gains were made at too high costs from the user point of view: they had to bear expensive and technically inferior machine tools often at the wrong moment. The new policy regime has reversed the previous focus. The emphasis today is totally on the user. The results have been wider availability and lower priced technologies and, in turn, a sharp increase in productivity and efficiency. Producers cannot, however, establish themselves nor make the technologically crucial jump into the electronics era. Both policy regimes would seem to have missed the essential point of diffusion: both users and producers have to be jointly upgraded, obviously as quickly as the international market allows it. It is now time to learn from experience and redress the balance. Given the current ideological stance of many governments in the region, diffusion policies aimed at correcting market failure could fall well within their limits. Following Stoneman and Diederen (1994), three sets of polices would seem to be relevant. First, information provision policies. These include demonstration projects and advertising campaigns, publicly funded technology information and monitoring centers, subsidizing consultancy activities, encouragement of science and technology parks, establishment of joint public–private research laboratories where the government acts as a risk carrier and setting standards. Some of these mechanisms have already been tried in the region but often they have been mechanical copies of what is done elsewhere with little adaptation to local circumstances (Velho et al., 1997). Second, competition policies are necessary to reduce prices and improve quality, although they should not always focus on increasing the numbers of competitors as this is not necessarily conducive to successful diffusion. Third, appropriating externalities policies. Policies in this field comprise support for early developers and adopters of new technologies and government procurement. For those governments that may be less tied to ideological considerations, some additional “systemic” polices could be considered. It must be noted that these polices are complementary to market failure mechanisms and a clear border between both often cannot be drawn. Following Carlsson and Jacobsson (1994) three sets of policies could be considered: cluster development, improving economic competence and institutional development. Cluster development involves creating a common vision and purpose and increasing the connectivity of firms around a specific technology. Improving economic competence implies providing clarity as to the overall direction of the economy and giving the necessary confidence and guidance for firms to invest long term. Institutional development means updating the educational and training support to the requirements of technological change.